In my house, the appreciation of the legal thriller (for that matter, any thriller) falls squarely in the wheelhouse of my husband Larry, who loves this stuff. So when I was contacted by the author of these two books I wasn't sure, but I had to admit that at the time the premise of both novels sounded pretty good and if I didn't like them, well, I knew Larry would.  And despite the fact that I prefer crime fiction from the past,  from time to time, I like to check in on what's new in the modern world of small-press crime, so I said yes to the author's request for reading his books.   What surprised me the most is that these books turned out not to be legal thrillers per se, but more like mysteries involving people in the legal profession.  So maybe "legal thriller" isn't the best moniker to apply to these books after all. 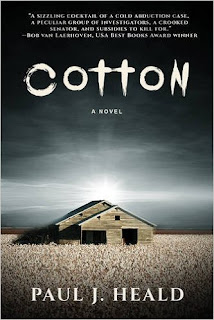 The author of both of these novels is a law professor and travels around the world giving lectures, so if anyone's qualified to write books with the legal profession as a backdrop, it's definitely him.  I accidentally read the two novels out of order so let me set the record straight here.  The correct order, chronologically, is Courting Death, followed by Cotton.  Both are set in the small town of Clarkeston, GA, and both share a main character, Melanie Wilkerson, who in the first book is a judge's law clerk and in the second a US attorney in Atlanta.  Since I read them out of order, I'll talk about them in the same way.  Cotton begins with a big surprise for James Murphy, an investigative reporter with the Clarkeston Chronicle, who doggedly followed the case of the missing Diana Cavendish, who had disappeared without a trace some five years earlier. The story is that she was "presumably abducted by her boyfriend Jacob Granville, from a prominent local family. She left behind a "blood-spattered apartment," but no one had any clue what had happened to either of them.  With no more evidence coming in, authorities had eventually just given up on the case, although James was told that the FBI had been alerted three days after Diana's disappearance.    So imagine James' surprise when while he's surfing through a website called "Mygirlfriendsbikini.com," up pops a photo of the missing woman dressed in a swimsuit on the "This Week's Babes" section of the website.  The photo inspires him to go back and take a look at the case again, but he knows he's going to need help. He takes his story and the website's URL to Melanie Wilkerson, and she's just curious enough to check it out.  Turns out that not only had the FBI not been called in, but curiously, on the FBI database she discovers that next to Granville's name is a phone number, to which any and all inquiries about the case should be directed. Melanie sends James on his way, but she realizes that there is something "whiffy" about the case and launches a private investigation, beginning with an attempt to track down the owner of the website where James had just seen Diana's photo. For this she calls in Stanley Hopkins, a sociology professor and professional consultant, whose initial discoveries will take the case in a direction that no one would have ever suspected.

While Cotton has lots of standard thriller elements -- international intrigue that moves into the highest levels of politics, cover ups, etc., what I really liked about it is that it runs out to be a good mystery that takes its time getting solved.  The people who join James and Melanie in helping to solve the case are perfect as a team, and for me, that combination of mystery and main characters are what make this book a good one.  The added bonus is that neither over the top violence nor graphic, unnecessary sex scenes find their way into this story, a fact I can definitely appreciate since these days that's pretty much unheard of.  So, bottom line -- this is a book worth reading and will appeal to people who are in it for story rather than the other baggage that seems to be part and parcel of modern crime these days. Well done. 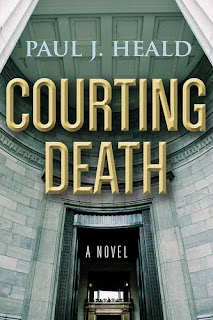 In Courting Death, although Melanie Wilkerson makes an appearance again, the action takes place earlier than Cotton.  Here she hasn't made it to the US Attorney's office, but rather is clerking for a prominent judge in the federal courts. Melanie becomes involved in following the trail of a death that happened some five years earlier, a case that catches her attention and piques her curiosity because it happened in the same place Melanie is currently working. Around Melanie this time are fellow clerks Phil Jenkins and Arthur Hughes, who are tasked with doing research in cases of habeas corpus -- death penalty cases to be more exact. Their work involves reading cases and writing memos that "get the law right, regardless of what the substantive result is."  In fact, Courting Death, outside of the mystery that Melanie goes out of her way to look into, is a novel that makes the reader look at issues surrounding capital punishment, based on cases that come Phil and Arthur's way.  In this sense, it's less mystery than Cotton, but rather a more philosophically-based novel when it comes to the capital court cases.  But when all is said and done, it's Arthur who takes center stage here -- his growing relationship with his young landlady, his doubts about the death-penalty cases, and other events that start to take a personal toll,  and to top it all of, he has ongoing concerns about the Judge for whom he works.

Putting the two together,  I liked Cotton much better although I did appreciate the way that the author  forces the reader to examine different facets of the legalities behind capital cases in Courting Death. There's so much more involved in these cases that most people don't realize goes on behind the scenes, and this book really is an eye opener in this arena. At the same time, there's too much personal stuff going on here for my taste -- I get how it works overall in terms of Arthur's character and where it all leads, but as an example, 20 pages going through Arthur's father dying, the funeral etc., are just a bit too much.  The mystery that Melanie is involved in is intriguing, but it sort of plays second fiddle to everything going on in Arthur's life.  Unlike Cotton, this one has much more romance and personal relationships throughout the story which I'm just not into as a crime reader.  But that's a me thing not necessarily shared by other readers, and I have to say that I was caught up in thinking about the issues surrounding death-penalty cases more than anything else in this book. So this one works more for me on a philosophical level; the mystery surrounding the dead court clerk is also a good one but I wish it had been developed a bit more and that less focus had been given to Arthur here.  If he could bring back the team from Cotton and put them together in another intriguing mystery, I'd totally buy it, because in spite of the thriller elements that I normally just don't care for, there's a solid mystery at its core that I couldn't wait to get to the bottom of.

Bottom line: both novels are quite good and I'd recommend the two to crime readers, but Cotton for me definitely has a slight edge because of its casting and because of the mystery at its heart.  If the author wrote another novel would I buy it? Definitely -- and trust me, for someone who is happiest reading crime fiction from the past, that's saying a lot.