The Killer Inside Me, by Jim Thompson 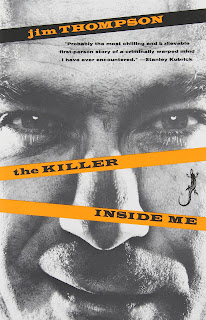 The Killer Inside Me is one of those novels that needs no introduction at all -- it is and will always be a classic of American noir fiction, it's been made into two movies (1976 and 2010), and chances are that if you haven't read the novel you've at least seen the film. Or, if you're really fainthearted, you've experienced neither, since both book and movie are dark, disturbing, and well past the point of unsettling. It's also one of those books that has been studied left and right, inside and out, and has even been the subject of a number of dissertations.  So the question remains what is left to the bring to the table about this book.  The answer - not much.

Lou Ford, of course, is a psychopath -- and as in many existentialist crime novels the reader finds him/herself seeing things from inside the mind of a sadistic and brutal killer. He, like Nick Corey, his counterpart in Thompson's Pop. 1280, hides behind a badge to do his dirty work, has nothing but contempt for the locals, and manipulates things so that outwardly, no one would believe he'd be capable of  violence or any sort of abnormality.  His deceased dad knew what sort of person Lou really was, but to the the rest of the town, he's perfectly normal.  Ford knows he's not normal and doesn't mind sharing his insanity with the rest of us  -- for one thing, he's got his own psychopathology figured out through his reading of medical and psychological texts-- and he also realizes that his habit of barraging people with clichés until they squirm, that the zippy little phrases he throws out are his substitute for the violence associated with his "sickness" that he says he's been able to keep buried.  We follow him down a trail of manipulation, violence, and revenge  as he begins to unravel -- slowly at first, then in a very big way, starting with the day his boss tells him that he needs to go out to pay an official call on local prostitute Joyce Lakeland, which, he tells us, is the catalyst for the return of his "sickness."

While this book is extremely difficult to read because of the sadistic, misogynistic violence (yes, I know ... a thing I generally try to avoid but I had to read this book -- it's a classic); it's trying to untangle what's in Ford's mind that is really the draw for me.  He may be one of the most unreliable narrators ever -- if you read carefully, there is a lot here that simply doesn't gel, and the way that Thompson has set up this book,  you have to take into account that Lou knows he has an audience in us, the readers.  Think about this too: this novel is Lou's confession, if you will, his way of trying to make us understand the logic behind his actions, laying out his plans ahead of time for our perusal, and revealing just how he is able to fool people so easily -- until he can't any more. So the question is this: is he really a victim of his "sickness," or does he just plain enjoy killing in the most brutal, sadistic ways possible?   He is, in cliché speak, the ultimate wolf in sheep's clothing.

There's much, much  more in this novel of course, but going through everything I discovered in this book would take forever.  As I said earlier, this novel has been scrutinized, studied, written about academically and otherwise, so there are a number of places to dig out more about it.  It's up there among books that made me want to take a shower after reading it, but it's so damn good I just couldn't stop.  And that sort of scares me, actually.