The Strangers in the House, by Georges Simenon 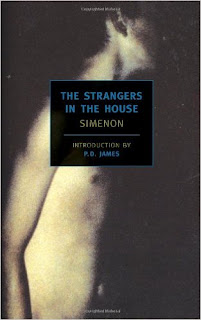 I'm somewhat reluctant to post about The Strangers in the House as a crime novel per se, because really, the crime that occurs and its aftermath is actually sort of the catalyst that sparks a man into action here.  It is another of Simenon's romans durs, and if anyone wants to know where the departure point between his commercial novels (think Maigret) and his "hard novels" lies, we can turn to Simenon himself for the answer. In 2012, Open Letters Monthly ran an article noting that


"the difference between the two ... was 'Exactly the same difference that exists between the painting of a painter and the sketch he will make for his pleasure or for his friends to study something.' "

He  romans durs, he says, he didn't see as "commercial in nature," and he "felt no need to make concessions to morality or popular taste."  When he was writing one of his "commercial" novels, as he told the Paris Review in 1955, he "didn't think about that novel except in the hours of writing it," whereas with the romans durs, as he said,

Most crime readers are very much into plot but in these novels, it's more the psychological/existentialist  aspects of the characters that takes center stage, and unless I'm at a point where I need fluff,  that, of course, is the draw for me as a reader no matter which genre I read.  The Strangers in the House highlights this distinction -- the story opens with a crime, there is an arrest, a trial and an aftermath, but it centers on lawyer Hector Loursat, 48, who for about 18 years after his wife had left him, has been living as a rather lethargic recluse in a small French town with his daughter Nicole, now 20.  And while a number of his acquaintances had over the years  invited him out for dinner or bridge, he remained alone, preferring his own company. His cousin told him that he couldn't possibly spend the rest of his life as a "hermit," but Loursat disagrees, and from then on


"He proceeded to prove that he could, and he had kept it up for eighteen years, eighteen years during which he had needed neither a wife, nor a mistress, nor a friend."

He and his daughter have been virtual strangers her entire life, with Nicole's upbringing having been put into the hands of one of the "domestics."  Lousart has during this time followed a regular routine -- several bottles of burgundy, followed by time spent reading in his study or his bedroom, and quiet dinners with his daughter where neither made any attempt at conversation.

Things begin to change one cold winter night when a sound like the crack of a whip wakes him up.  It seems to have come  from one of the rooms in his own home, and curious, he decides to have a look around. He runs into his daughter and tells her that there must be a burglar in the house, and notices that there's a light on somewhere on the third floor.  She tells him it must be the maid, but he doesn't think so -- and continuing upstairs, he realizes that this was


"the first time in years he had departed from his own narrow and strictly prescribed orbit."

Further investigation yields the discovery of a man on a bed who's been shot and then dies "at the exact moment" Loursat walks in. He phones the prosecutor, telling him that the situation is "really tiresome," wanting him to come over and sort things out. He has no idea "who it is or how he got here," but he soon comes to realize that in this big rambling house, Nicole has been leading her own life, having her friends over for parties and dancing in the attic, and he never had a clue at any time that any of this was going on. It dawns on him that one of these people must have been the murderer, a fact that fascinates him, but he's more amazed by the fact that there's a world he's known nothing about going on under the roof of his own home and more importantly, right under his very nose. This is the earlier-mentioned catalyst that makes him aware that "he'd never tried to live -- not in the ordinary sense of the word," but more importantly, the fact that these people have actually been "living" makes him aware  that he hasn't been.

There's much, much more, of course, but I'll leave it all for anyone who may be interested in reading this novel.  While The Strangers in the House has a few minor flaws plotwise,  they're pretty irrelevant  -- this book is very much character driven and doesn't really revolve so much on plot details.  Simenon has again given us a book that oozes atmosphere, setting and above all, a look at what PD James in her intro (which I strongly advise avoiding until the end) calls "the secret underground of the human heart," and Simenon's understanding of  (as James also observes)


"the salient facts which bring alive a character or a place, inducing the reader to contribute his own imagination to that of the writer so that more is conveyed than is written."

While I enjoyed his The Engagement much more, I can most certainly recommend The Strangers in the House to people who, like me, are much more into a book to discover what he/she can about human nature.  This one definitely speaks volumes.