There comes a time, yes, even for me, when I have to back away from the darker side of crime fiction and pick up something light.  A steady diet of bleak just doesn't cut it.   So every now and then I'll actually say yes when someone emails me about reading his/her book if it fits my need at a particular moment. In this case,  I've been uber-sick, got better, got sick again by being stupid and thinking I was wonder woman, and on top of everything physical, I've basically been in a mental funk for the last two months.  We won't go there, but the point is that I've  needed a serious break for a long time.  The other problem is that aside from the novel by Camilleri I just finished, I don't think I even own anything on the lighter side. So when Oregon author Gary Corbin asked me if I'd read his book, I had no hesitation in saying yes.  Then I realized it was book two in his series, so I picked up book one since reading books in series order may be the one and only thing I'm actually OCD about. I read the first one on Kindle, but for non-Kindle people, it's available in all formats.  The books are published by Double Diamond Publishing.  He also has another novel out right now called Lying in Judgment, billed as a legal thriller.

First up - The Mountain Man's Dog, which takes place in the very small Cascade Mountain town of Clarkesville, Oregon, 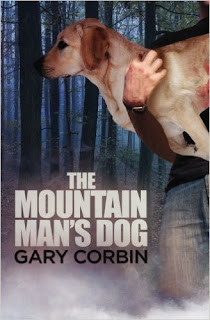 where main character Lehigh Carter manages his family's woodland acreage along with that of other customers.  As the story begins, Carter is  in his trusty pickup truck with the intention of heading to the grocery store when he is stopped by a dog limping its way across the road.  He isn't a fan of dogs, but he picks it up and takes it to the Clarkesville Animal Hospital where he runs into an old girlfriend, Stacy McBride.  Stacy just happens to be the daughter of State Senator McBride, currently running for Governor.  Up until a few weeks earlier, she'd been seeing her father's campaign treasurer Paul Van Paten, who has it in his head that he and Stacy should be engaged. She, however, has other plans, and they don't involve him. Paul and the McBrides have a long history together, and he's banking on being a part of this prominent family when the Senator wins the governorship and then runs for president, so he doesn't take the news well when Stacy rejects him in favor of Lehigh.  He puts pressure on Stacy, but for Lehigh, well, let's just say that after some money is accidentally delivered into Carter's hands, Van Paten makes sure that Lehigh knows it's now all-out war between them.

Moving onto book two, The Mountain Man's Bride, we pick up the story not too far in time from the action in the first book.  Lehigh and Stacy are now happily engaged and looking forward to tying the knot.  Everything seems to be on track for returning to normal, and Lehigh is trying to get his life back in order following events from The Mountain Man's Dog.  Things are moving slowly but steadily for the two when their happiness suddenly gets put on hold -- it seems that acting Sheriff Jared Barkley has been killed and it looks as though the police think Stacy is responsible.  But they're not ready to let Lehigh off the hook just yet --  even though he has an alibi, there are a few people who want the crime to be pinned on him, and who will do anything to make sure that he ends up behind bars.  Lehigh, however, has other ideas, and starts his own investigation to clear both of their names.  Unfortunately, what he learns in the process has him beginning to doubt his fiancée -- and not just where murder is concerned.

Let me get my niggles out of the way first.   I had to wonder why people speak like they're from the deep South in these books when they're in Oregon -- seriously,  it caused me major moments of cognitive dissonance in my head and was hard to get past. And this is just a me thing, but I'm just not a huge fan of sweet romance in my crime, but by now anyone who has taken a moment here and there to read what I post already knows that. But as I said, that's on me -- there are certainly plenty of readers who love it. On the positive side, while there is a murder in book two, and while both books do have their fair share of violence, we're thankfully spared the more gory details as the author chooses to focus instead on his characters and on the main issues at the heart of both, political corruption and the abuse of power.  There is nothing over the top to be found in either book, making for a sort of carefree, non-stress, light reading experience even as the tension grew and as I was left wondering how Stacy and Lehigh were going to get out of their respective predicaments, especially in Mountain Man's Dog.   So for me, in that sense, I enjoyed both and they were exactly what I needed -- two good old-fashioned, lighter-side mysteries that I could just relax and have fun with.

While definitely not my norm, sometimes light is good for me, and I need to remember that and read more of it from time to time.  If I laugh that's also a plus, and that's what happened with these books since there is also a bit of comedy in each.   Of the two, I liked The Mountain Man's Dog a bit more than The Mountain Man's Bride, since it was a bit more suspenseful all around and because it offers a glimpse at what happens when less-than-scrupulous campaign staff let ambition and power take the wheel, and even there Mr. Corbin makes his point without having to get too down-and-dirty hardcore about it.   Those readers who normally enjoy crime light will be happy with these books.  One more thing -- I especially appreciate that the author didn't feel compelled to join the ranks of those writers who use torture, graphic sexual violence against women, and hardcore violence in general to sell their books.  Applause, and thanks!
Posted by NancyO at 5:11 PM