The Disappearance of Adèle Bedeau, by Graeme Macrae Burnet 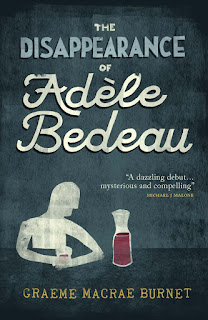 At page 90 I started thinking that this book has a Simenon sort of feel to it, and then on page 95, I came across a passage describing one of the characters who "devoured Simenon."  By the time I finished this book, I came to the conclusion that the author must also be a fan of the Belgian author, because like Simenon's romans durs, Burnet's focus in The Disappearance of Adèle Bedeau isn't so much on a specific crime, but rather on what's going on inside the heads of the two main characters.

The setting is also part and parcel of this story -- as he noted in an interview at Bloody Scotland, the author visited the  French town of Saint-Louis, where he observed and was "captivated by the sense of unchanging routine and claustrophobia," words which, up until the titular disappearance of Adèle Bedeau, also describe the main character, Manfred Baumann.  He is a bank manager, a creature of habit and strict self control living a rather mundane and routine life. As we discover,


"If he lived the way he did, it was because that was how he wanted to live. He had no desire to change anything."

He has lunch every Thursday at La Cloche, and even there things are always routine -- he has a regular table, he always orders the same lunch -- "onion soup, pot-au-feu, crème brulée".  Only once has he changed his order, thinking it might perhaps get the attention of the waitress Adèle; he even goes so far as to order a second glass of wine, both out of character. At one point, he even goes so far once to remark on her appearance.   His fantasies about Adèle provide a break in his otherwise unremarkable existence, as do his regular visits to a brothel where even the sex is routine.

Manfred would have most likely continued on in this unchanging life had it not been for Adèle's disappearance, which brings in the second character under study here, Detective Georges Gorski.  At age sixteen, he had understood that he was meant to take over the family's business, but he had decided instead to become a policeman.  At age eighteen he joined the force, did time on the beat (during which time he came to realize that he was being favored as "the inspector's protégé"), and made detective in his mid-twenties.   Gorski realized that "there was little in the way of crime to be solved" in Saint-Louis, and set his sights on "more exciting pastures...somewhere alive with crime, violence and murder." His first big chance came in the form of the murder of a young girl for which an innocent man was tried and convicted. When we meet the detective, his failure in the now twenty year-old murder continues to weigh heavily on him, so he really wants to solve the mystery of Adèle's  disappearance.  Manfred becomes a person of interest in the case as the last person who is known to have seen her. Although he claims he is innocent, paranoia begins to set in, and soon his carefully-ordered, carefully-controlled life tragically begins to unwind.

The book is not a crime story per se -- the disappearance of Adèle is the frame upon which rests an examination into the past and present of these two men, each in their own way outsiders, as well as a portrait of a small town where life has gone on virtually unchanged.  In the "Translator's Afterword," we also discover that the author has been having a bit of metafictional fun with his readers, with the claim that the novel was the work of Raymond Brunet, born in Saint-Louis, and that his life has some bearing on the character of Manfred Baumann. He goes on to inform us of the publication and film adaptation of the novel and other interesting points, but I'm not quite sure why the author felt the need to do this since the book certainly stands on its own.

The Disappearance of Adèle Bedeau may not be the ideal book for readers looking for an action-packed thriller, but it's certainly a good choice  for those who enjoy an intense glimpse into the strangeness of the human psyche and the outside forces that can help to determine why people do what they do. Recommended.

Email ThisBlogThis!Share to TwitterShare to FacebookShare to Pinterest
Labels: 2017, fiction from Scotland