a Graham Greene double (well, triple really) play: The Ministry of Fear, The Third Man and The Fallen Idol

"But he didn't understand a thing; he was caught up in other people's darkness." 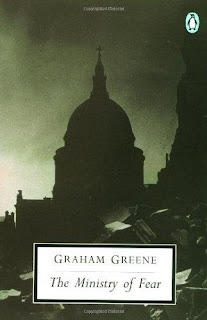 The Ministry of Fear was, according to Greene himself in his Ways of Escape (1980), written after he'd read a particular book by writer Michael Innes.   Greene was not a huge fan of  English detective stories but as he notes, Innes' book was a "surprise and welcome change...a detective story both fantastic and funny."  Greene decided he could do the same, and he chose his plot thinking that it would be "a funny one," but after having finished the book, he realized that it really wasn't funny at all.  The Ministry of Fear, he also notes in Ways of Escape, is his "favorite" among what he termed at the time his "entertainments," which he said "distinguished them from more serious novels."

Since I've got three Greene stories to cover, these little synopses will all be brief.

The Ministry of Fear is an excellent spy novel with a number of truly remarkable twists and turns, but even more importantly, it is an excellent character study. Here his focus is on widower Arthur Rowe, who after some time away (I won't go into the details here) returns to the outside world. As we get to know this man, it seems that Arthur's inner turmoil is a reflection of the outer turmoil of the world he's come back into  -- for example, as the country  "has a war on," so too does Arthur in his head; there are "gaps between the Bloomsbury houses," which continuing the image, will also reflect Arthur's psyche, as  the "sound of glass being swept up" reflects his shattered self.  He is happy to find himself at a local fête on a "late summer Sunday afternoon" --  it "called him like innocence; it was entangled in childhood..."  -- where he is asked if he would like to guess the weight of a cake.  Guessing off the cuff, he later makes his way to the fortune-teller's tent where he learns that he should actually give the weight as "four pounds eight and a half ounces." He changes his guess, wins the cake and on leaving, is told that a mistake had been made, that someone else had actually guessed correctly.  Arthur refuses to hand it over, and it is this one decision that changes his life. Following an attempt on his life, he is framed for a crime in which his own knife is the weapon, and finds himself not only at odds with the people trying to get him out of the way, but also with his own mind and especially his past. 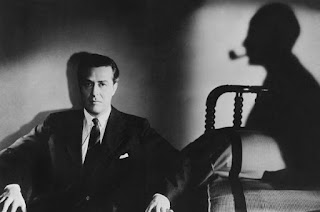 The movie is a bit of a conundrum.  Greene's depictions of the blitz and the atmosphere surrounding it move nicely from page to screen, the spy vibe is definitely out in full force,  and the sense of dread is palpable throughout.  However,  Fritz Lang left out some pretty vital scenes from the novel to make his film, and like Greene, I was not happy about it   -- as he said, the omission of the scenes that find Rowe in a mental clinic made "the whole story meaningless," and I concur. The depth underscoring Ray Milland's character (who now becomes Stephen Neale) is not brought to life as fully in the movie as it is in the book, which sort of misses the entire point.  So read the book first, for sure -- it is so much better than the movie.

Book number two is The Third Man and The Fallen Idol.  Both stories once again blew me away, especially The Third Man which is just genius storytelling.  Turning again to Greene's own words in Ways of Escape, the author states that this story "was never written to be read but only to be seen." 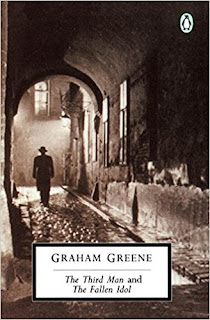 However, he also says that

"For me it is impossible to write a film play without first writing a story...I must have the sense of more material than I need to draw on."

Luckily for me and for fans of Greene's work, he felt as though it had to start as a story first. And oh my god, what a story it is.  It is set in a divided, "smashed dreary city,"  postwar-Vienna,  which at the time was occupied by the four powers, and is a tale of black-market corruption and racketeering.  The book begins with the arrival of Rollo Martins, a hack writer of western novels, who has come there to work for his friend Harry Lime. Lime has offered him a job in a charity he supposedly runs, but when Martins arrives, he finds that Lime has been killed in an accident in which he was run down by a car.  Martins, who "worshipped Lime"  is resentful that Scotland Yard's Colonel Calloway has pinned "some petty racket" and murder on his now dead friend, and swears that he will make Calloway "look the biggest bloody fool in Vienna" for doing so.  What Martins doesn't know, and what Calloway doesn't explain until it's necessary, is that Harry was not involved in just a "petty racket going on with petrol," but rather something so heinous that it beggars belief. Martins knows that there were two witnesses to Harry's death, but as he continues his quest for the truth, he uncovers evidence of a "third man" who was there as well, making Lime's death a murder and not an accident. Who was this third man? And why did he not come forth to give evidence? As Martins tries to discover answers, he finds himself caught up in something so much bigger than he'd ever expected. All eyes on Martins here -- Greene once again gives us a character who has to come to terms with a reality that will test everything he's ever known or believed. 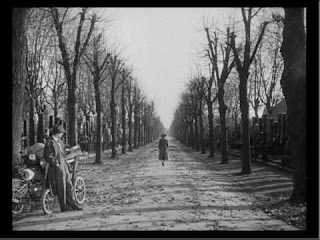 The film is just over-the-top excellent -- once again Greene fleshes out the characters in much more detail in written form than the film can convey, although the movie comes very close. Once again, I'd say if possible read the book first because you will get a lot more out of the film.

And now to the third story, "The Fallen Idol," which started life in 1935 as "The Basement Room." After having finished it, I understand the logic behind the original title, but even so, the story is just so damned good that it hardly matters.  Book and movie are quite different -- as Greene explains, what started as a story about "a small boy who unwittingly betrayed his best friend to the police" ended up as a tale about "a small boy who believed his friend was a murderer and nearly procured his arrest by telling lies in his defence."  I'll go further: reading carefully, we find that this is a story of a suppressed memory based on childhood events -- there are interjections throughout that reveal Philip in his sixties still traumatized and by then psychologically damaged.

In the story, young Philip both adores and pities his friend Baines, the family butler.  As we're told, it had "occurred to him how happily they could live together in the empty house if Mrs. Baines were called away," since she is always harping on her husband and making life just plain miserable in general. Philip stumbles onto a secret that Baines has been keeping regarding another woman, which pushes him into a world he doesn't quite understand and is not ready for;  he then unwittingly betrays Baines prompting a series of events that will trouble and color Philip's psyche for the remainder of his life. 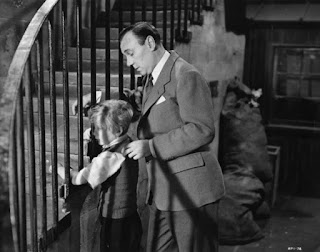 I have to say that I love this movie. This is my second time viewing the film, and it was better this time around than the first.  Even though Philip stays a little boy here and there is no hint of the older Philip as in Greene's original story, it is so suspenseful that I was mesmerized. The casting of Bobby Henrey as Phillipe was so perfect that his is the face I saw while reading the story; the same is true in the case of Mrs. Baines, who in the book is described by Philip as being "so like the witches of his dreams."  The scene with MacGregor, the snake, the one that really sets Philip against her (not in the novel, by the way), says everything a person needs to know about this character.

Sadly, with two books/three stories at once under discussion here, there's really no time to dig deep, but careful readers will definitely find a LOT going on in these stories aside from plot. The quotation I began this post with is from "The Fallen Idol," and this one short sentence to me embodies much of the essence of all three of these stories. For me, it ties these diverse tales together in a way that makes complete sense.    In The Ministry of Fear the main character accidentally stumbles into a serious case of espionage, The Third Man focuses on a man who refuses to believe that his best friend in the world might possibly be guilty of  horrific deeds in postwar Austria, and in "The Fallen Idol" young Philip finds himself plunged headlong into the messy adult world with no understanding of how it works.  For me all three are also scenarios of a sort of lost innocence that can never be reclaimed, all have to do with secrets and lies, and all are frankly quite brilliant.  As I keep telling people, it's just a shame that this author is not read very widely any more.  He is a master storyteller as well as an author whose works go well beyond simple plot into deeper, darker places -- in short, my kind of writer.

I highly, highly recommend these two books as well as the movies -- I'll be revisiting Greene here shortly.