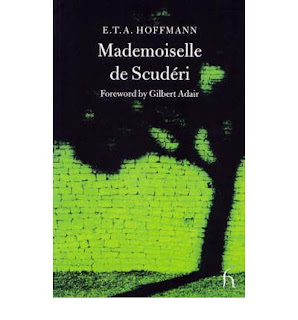 Finally getting myself back on track here, I've just finished  E.T.A. Hoffman's Mademoiselle de Scudéri, which has been seen by many  as an early, pre-Poe example of the detective story. In his foreword, Gilbert Adair also notes that this is so, and he notes that Mademoiselle de Scudéri is a "genteel elderly spinster not a thousand miles away from Agatha Christie's Miss Marple."  He may be right, and in that sense, this short novella is definitely worth reading by anyone at all interested in the history of the genre, and to be more specific, in the history of the female amateur detective.

Set in Paris, "the scene of the most heinous atrocities," during the reign of Louis XIV, this tale comes on the heels of the infamous ""affair of the poisons" of 1677 that resulted in the establishment of the Chambre ardente, a special tribunal headed by Gabriel Nicolas de La Reynie. As Hoffman reveals,


"The tribunal completely assumed the character of an inquisition, the slightest suspicion was sufficient to lead to brutal incarceration, and it was often left to chance to demonstrate the innocence of the person accused of a capital crime."

Just FYI, I'm not offering a history lesson here -- all of this is relevant to the case in which la Mademoiselle finds herself embroiled. It seems that while the poisonings have become "less and less frequent," another series of crimes finds its way onto the streets of Paris. This time it is the theft of jewelry, assumed to be the work of a "gang of thieves" who were out to "get its hands on all the jewels in town". Their victims are all men who have purchased "rich jewellery" -- not only are they robbed, but they are either knocked out or murdered.  All of the dead men showed the same sort of wound: "a dagger-thrust to the heart which ... killed so swiftly and surely that the wounded victim simply fell to the ground, unable to utter a sound."  Despite strengthened police presence, the thefts and murders continued, and  it wasn't long until people began to believe that perhaps


"it really was the devil himself protecting the heinous villains who had souls their souls to them."

This story takes place in 1680.  Around midnight a "cloaked figure" makes his way to the home of the celebrated Mademoiselle de Scudéri on the rue St. Honoré, demanding to see her. She is asleep, but in talking to the maid, he leaves behind a small casket that he demands be given to her.  The next day, upon inspection, it is found to contain "a pair of golden bracelets richly adorned with jewels" and matching necklace, along with a note signed by "The Invisibles" who thank her for her "wit" which has saved them "from great persecution." The jewelry is a gift, a token of their "gratitude," and she is appalled that this notorious gang of thieves and murderers would even consider that she was their friend in some way. Taking the jewelry to her friend (and the mistress of  the king) Madame de Maintenon, she discovers that the pieces were all the creations of René Cardillac, "the most skillful practitioner of his art, not only in Paris, but perhaps of his whole age," who when questioned, reveals that the jewelry had "inexplicably disappeared" from his workshop. Later, when Cardillac turns up dead, Mademoiselle de Scudéri suddenly and somewhat reluctantly finds herself deeply involved in the case, finding herself in direct opposition to the notorious chambre ardente.

I had great fun with this story.  It may not be the greatest literature ever written, as it leans a bit to the side of melodrama toward the end, and it ultimately depends a great deal on coincidence (both part of my normal reasons for not enjoying a book),  but I have to say that after all has been revealed, the story becomes much more than just a work of crime fiction. The historical aspects are fascinating -- the affair of the poisons and its psychological aftermath,  the concerns that the devil and his henchmen are active agents on the streets of Paris, the creation and operations of the chambre ardente all make for great reading.  The personal history and the psychological motives underlying the acts of the villain of this piece are also quite interesting, and as Adair has noted in his foreword, it is vintage Hoffman.    I won't explain, but I would suggest not reading anything at all about this book that gives away much more than the dustjacket cover blurb. Heck, don't even read the foreword or the introduction if coming to this book with, as Adair says, "an 'innocent' eye."

I know that a number of people didn't care too much for Mademoiselle de Scudéri, and I can sort of understand their reasons why.   However, as a step toward modern crime fiction, it is of great interest to me as a reader of the genre, and in that sense, it is well worth the time, and I'm very happy to have read it.