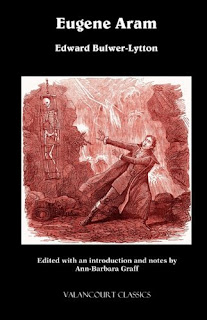 "I looked on the deed I was about to commit as a great and solemn sacrifice to Knowledge, whose Priest I was."

Edward Bulwer-Lytton isn't exactly a household name, but in a way, everyone has some teensy measure of  familiarity with this 19th century author, since he was the guy who coined the famous phrase "It was a dark and stormy night," in his novel Paul Clifford (1830), which gained fame via Charles Schulz (see cartoon below) and via the annual (since 1982)  Bulwer-Lytton contest, a


" whimsical literary competition that challenges entrants to compose the opening sentence to the worst of all possible novels." 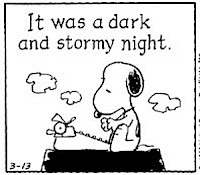 As a word of friendly warning, I should note that Bulwer-Lytton's style of writing has been labeled as "florid," "turgid," and one of my online friends referred to it as the "paid-by-the-word" style -- in short, he's extremely verbose, a yammerer extraordinaire, and devoted to wordiness to the point where reading is a chore.   I consider myself to be a very patient reader but I almost lost my cool after reading six pages devoted to absolutely nothing but one man trying to convince another to look after his cat while he was off on his travels. I knew this was going to be rough going pretty much at the outset.


However, in spite of the extreme verbosity, Eugene Aram turns out to be a pretty decent book, a tale very loosely based on the real-life story of the titular character.   According to the Newgate Calendar, aka The Malefactors' Bloody Register,  the real Aram,  was "A Self-Educated man, with remarkable Linguistic Attainments, who was executed at York on the 6th of August, 1759, for a Murder discovered Fourteen Years after its Commission."  Bulwer's Eugene Aram is just one example of the body of work known as the "Newgate Novel,"


"so-called because the characters of its stories might have been found in the pages of Newgate Calendars, a collection of criminal biographies that first appeared in 1728."

This sort of book "focused on the lives of real or invented criminals,"  and are of huge  importance to the history of crime fiction, since as stated briefly in a blurb for chapter eight of  The Oxford History of the Novel in English: Volume 3: The Nineteenth-Century Novel 1820-1880,


" These novels and others like them set in place themes and tropes that shaped early fictional narratives of crime.They incorporated factual events, revolved round the figure of the criminal, and promoted a didactic political and social message."

In other words, according to one literary scholar, the Newgate novel "emerged in the 1830s as a response to contemporary issues within the social, legal and penal systems of Victorian London." For further information, there are all sorts of resources online and in print about the Newgate novel; now it's on to Eugene Aram.

Aside from the overly-excessive verbiage here, the novel isn't half bad.  Divided into three volumes, the first few chapters introduce us to the main characters of this book, and situate us somewhere in the English countryside, in the village of Grassdale.  The backstory to what is to come is also introduced, concerning the disappearance of one Geoffrey Lester, brother to squire Rowland Lester and father of Walter Lester. Geoffrey had married a woman with a "competent and respectable fortune," stayed with her a few years even though the marriage wasn't a good one, and then just took off leaving young Walter behind to grow up in the home of his uncle Rowland. Every effort had been made to find Geoffrey, but to no avail.

As he grew older, Walter fell for his cousin Madeline, but she only has eyes for the mild, reclusive scholar who lives nearby,  Eugene Aram.  With the handwriting on the wall regarding that relationship, and with no love lost between Walter and Aram, Walter decides it's time he goes out into the world.  While he's out there, he plans to seek news of his long-lost father. As we're told,


"The deep mystery that for so many years had hung over the fate of his parent, it might indeed be his lot to pierce; and with a common waywardness in our nature, the restless son felt his interest in that parent the livelier from the very circumstance of remembering nothing of his person."

Off he goes and it isn't too long after he begins his quest that he finds the first clue having to do with his missing father; following that up sends him on to yet another place and so on until he is ready to return to Grassdale, as it just so happens, on the day set for the marriage between Madeline and Eugene Aram. But the wedding plans are off after Walter reveals everything he's learned over the course of his travels -- as the back-cover of my copy reveals, Walter's quest will "lead to the discovery of a long-hidden and horrible crime and the trial of Eugene Aram for murder!"


The story goes back and forth between Walter's adventures and scenes between the Lester family and Eugene Aram back in Grassdale, until both come together with Walter's return.  That's really all I'll say about plot, because while it was fun traveling along with Walter through all of his adventures (and there are many), of greater interest to me was Aram's motivation for his role in the crime. He's a complicated man, a closed-off, quiet, yet very respectable scholar and as Walter discovers, there are few in this book who have anything but great things to say about him. Yet, as we know from the real case, Eugene Aram turned out to be a murderer.  So what made Bulwer-Lytton's Aram tick?  I actually struggled with that question right up until I got to to page 400 something when the turning point/aha  moment  for me came as I read the following from a statement given by Aram, in which he says that he


"looked on the deed I was about to commit as a great and solemn sacrifice to Knowledge, whose Priest I was"

at which point I was actually sort of floored with the conceit of this guy.   How this is so I won't reveal, but it's a somewhat twisted logic Bulwer-Lytton uses here, and I'm afraid that I'm in agreement with many of his contemporaries who called him out for turning his Eugene Aram into sort of  as Winifred Hughes says in her The Maniac in the Cellar,  a "criminal-hero."

I've noted above the hazards of the writing style in this book, but I will also say that despite the testing of my endurance, Eugene Aram turned out to be a good read for me.  It takes a very patient reader to make it through this book, but it's worth it for many reasons, none the least of which is that it is a part of crime-fiction history.  When  earlier I posted my thoughts on Richmond I said that "it's a narrow circle of readers who will be attracted to this book, making it what I call an "NFE" read -- not for everyone..." and I will say that the circle  of people who would be attracted by Eugene Aram is probably even narrower.  I would, however, certainly recommend it to readers who are interested in the evolution of crime fiction, and for those readers who are interested in pre-Victorian British fiction as well.