*Richmond: Scenes in the Life of a Bow Street Runner, by "Richmond," (ed) E.F. Bleiler 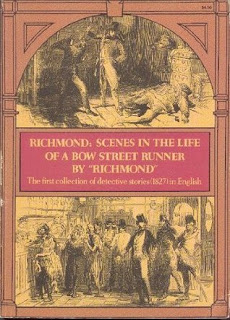 Continuing on with my look at crime fiction history, I discovered this book, which the front cover says is "the first collection of detective stories (1827) in English."   According to E.F. Bleiler's introduction, true authorship of this book is unknown (well, at least it was in 1976 when this volume was published), although the names of two different men (Thomas Surr or Thomas Gaspey)  have been floated about as having written these tales.  Bleiler dismisses the possibility of either one having done so.

I'd say that for modern readers, it's definitely a book for a niche audience -- for people like myself who can't get enough of this sort of thing, for people interested in the popular side of 19th-century British fiction, for readers looking into the history of British crime fiction, for people interested in the Bow Street Runners (and so on).  The writing is thick, meaning a bit archaic for today's reading audience, and there is a lot of narrative yammering by  both narrator and other characters which can drive a person crazy. Then again, the author realizes this here and there, as in Richmond's fourth case when he notes during a scene in the courts:


"The magistrate soon grew tired of this stuff, as I fear the reader has been long ago..."

or in scenes in which Richmond tells people to, as translated in our modern verbiage, cut to the chase and get on with the story.  That sort of thing is only annoying for me every so often here, and doesn't really bother me too much -- in short, I had great fun with this book.

Originally published in three volumes, here Richmond is divided into two parts, complete with labels as to the ending of each original volume.  The first part is composed completely of "Richmond's Early Life," which follows him from school days on to as he says,  "the period of my education for future duties at Bow-street." It's his love for a woman that, among other things,  sends him on the run, lands him in a small theater group, sends him to live with the "gipsies" for whom he develops sympathy, great respect and true friendships.  The second part consists of five of his cases, throughout which his


"fame travelled in company, waxing, like the moon, brighter and broader as it rolled on"

so much so that his services were in great demand and in "much request for enterprises of 'great pith and moment.' "

There is a wide range of cases for him to solve here.  He begins by looking into the disappearance of a little boy whom, it is feared, has been the victim of a "resurrection man" who kidnaps and kills in order to make money from bodies by selling them to anatomists. Next up is my personal favorite, in which an attorney turned rector via a fake degree decides to make his home among villagers who hate his tithe policies and try to drive him out using some very funny tricks (fake ghosts, fake earthquakes, a rat in the house with a bell attached to it, and more); while he's settling this one, he becomes involved with graverobbers.  In fact, each case is not focused solely on just one crime -- Richmond uncovers others and continues his pursuits throughout the book, so a bad guy from one case may turn up in another.  Moving on, the third case is a bit more complicated, involving smugglers, racing fraud etc., but it is here that he meets the woman he will eventually marry. In case number four, his services are required to rescue a man's daughter from a husband who is driving her mad and treating her terribly, and finally, in case five, Richmond spots a well-dressed woman trying to pass forged bank notes, leading him to bigger fish when he saves the life of a naive young man who tries to drown himself.

Not only are these stories fun in the reading, but they move in and out of social, economic and class divides, exposing the best and the worst among all kinds of different people; it also moves between city and countryside so that we get the idea that crime happens everywhere.  Richmond's detection skills are first rate; at the same time, having lived with the "gipsies" and gaining an understanding of how need and want can sometimes drive people into crime, he often turns his head to ignore some illegal activities that he feels are not as heinous as others.

As I said earlier, it's a narrow circle of readers who will be attracted to this book, making it what I call an "NFE" read -- not for everyone, and that's okay.  For me it's another window into the history of crime fiction, and I'm very happy to have discovered it. For any reader deciding to take a look, Bleiler's introduction covers a wide range of topics not just connected with Richmond -- it also includes a brief history of the Bow Street Runners and how they were perceived as well as many other subjects of great interest to nerdy people like myself.  I found Richmond fascinating -- then again, I could make a steady diet of books like this one.