The Blank Wall, by Elisabeth Sanxay-Holding: A yes in my book. 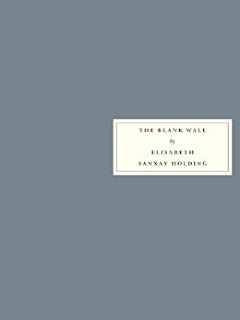 It's not surprising that a number of regular crime fiction readers have never heard of Elisabeth Sanxay-Holding (1889-1955), but it's certainly a shame.  According to the Publisher's Note in this book, in 1950 Raymond Chandler wrote to his British publisher, Hamish Hamilton asking if "anybody in England" published her work, noting that


"For my money she's the top suspense writer of them all."

He went on to recommend three of her books: Net of Cobwebs (1945),  The Innocent Mrs. Duff (1946) and this one, The Blank Wall.   The publisher's note also states that although a number of her books were published in the UK in the 1950s,

In 1959, Alfred Hitchcock reprinted the complete The Blank Wall in his anthology called My Favourites in Suspense, and a reviewer at the time described Holding as an "astonishing artist" and called upon "reprint publishers" to take notice, but sadly, no one did.  As late as 1981 Maxim Jakubowski writing in The Guardian also said that for publishers, perhaps "the time has come to take up Raymond Chandler's challenge" and to "resurrect the exemplary books" by this author, but  no one did.  Holding is another sadly-neglected author, but now that I've read two of her crime novels, trust me, the home library will be hosting many, many more.

I consider myself lucky to have found this novel, because it's so nicely done I couldn't stop reading it once I'd picked it up.  It reminded me so much of the work of Patricia Highsmith, but Highsmith's first novel, Strangers on a Train, didn't come out until 1950.  The Blank Wall is a book where there are crimes, cover-ups and consequences, but like so very many of Highsmith's books, the focus here is much more on character rather than simply crime.  In that sense, it's not what I'd call a typical suspense/crime novel, so anyone who may be considering it might want to make note of that fact. In other words, the plot is not nearly as important as what's happening around it.


Lucia Holley is a mother of two, keeping the  home fires burning while her husband Tom is away, "somewhere in the Pacific,"  doing his duty during World War II.  Her father lives with the family, and she's got a gem of a housekeeper named Sibyl to help her out.  Lucia writes Tom "very dull letters" every evening, letters meant to provide her husband with "a picture of a life placid and sunny as a little mountain lake." And in fact, life had been pretty dull at the Holley home, up until the time seventeen year-old daughter Bee began seeing a much older man named Ted Darby.  Lucia knows he's no good for Bee, and even made a trip to nearby New York City to confront him, but her visit had been "utterly useless," and ultimately harmful, since Ted immediately turned around and told Bee about it, setting up a confrontation between mother and daughter. Lucia, for whom there is nothing she wouldn't do "to stop this thing" makes several threats (cutting off Bee's allowance, for example), but inside she feels as though all of this was her fault -- that she'd made "several mistakes with Bee, even when she was a little girl."

Lucia's father (Mr. Harper) echoes her concern about Ted Darby, and matters come to a head one evening when Darby shows up at the boathouse.  As Lucia is writing Tom and considering how "badly" she'd done with Bee, Harper reveals that he'd gone to the boathouse and "dealt with" Darby, pushing into the water and sending him off with a "flea in his ear."  The next morning, Lucia wakes up "extra early," and decides to take out the rowboat and go for a swim, "to think of some new and better way to talk to Bee."  As she steps into the rowboat, she looks into the nearby motorboat and discovers Darby's body -- "fallen, on a spare anchor, half upended on the seat, and it had pierced his throat."  Her first thought : "Father did that."


"Of course it means the police, she thought. Then Father will have to know that he did this. They'll find out why Ted came here, and Bee will be dragged into it. And I shan't be able to keep it from Tom. Not possibly. It'll be in the tabloids."

Deciding that she must do anything "to save us all," she decides to hide the body.  But Darby's death  is only the tip of the iceberg:  it's not long until she finds herself targeted for blackmail by a crook who has gotten hold of letters from Bee to Ted, leading to a sequence of events that will reveal exactly how far and to what costs this woman will go to protect her family.

So that's the plot in a nutshell -- suspenseful, definitely, and also twisty along the way to the end, but as I said before, there is much more than merely plot to this book, and Lucia is at the center of it all.  Lucia is a passive, highly-insecure woman  and with Tom away, her "little world," as Lucia puts it, consists solely of her children and her father, for whom she will do anything. Her life since childhood has been relatively uneventful; she married young  at eighteen, directly out of her parents' house, then had her first child. Up until Tom went away for the war, she's rarely had to cope with things by herself, and her life is rather humdrum and dull. She depends heavily on Sybil, who often covers up Lucia's absent-mindedness and sloppy housecleaning; Sybil makes the best deals at the markets to get the most out of their ration coupons, and keeps things on track within the home. But as things begin to threaten Lucia's "little world," Holding does a brilliant job here in slowly bringing out a Lucia who somehow manages to go deep within herself to find the strength she needs to protect it; she also makes us privy to Lucia's thoughts in which she comes to terms with how she really feels about herself and her life.

As Sanxay-Holding lets us into to Lucia's head, we also get a glimpse into how women with domestic responsibilities  like Lucia  are viewed outside of the home. As just one example, while in New York City,  Lucia decides to take out a loan from a company that advertised it would "lend money on a note," with  "no delay" and "no red tape." With no income of her own, the promises don't hold true for her. Thinking about her frustration while in a cab, she notes


"If one of those reporters stopped me in the street and asked me what I thought about Russia, or something like that, he'd put me down as Mrs. Lucia Holley, Housewife.

Why is it 'housewife'? What would I call myself if we lived in a hotel? Nobody ever puts down just 'wife' or even just 'mother.' If you haven't got a job, and you don't keep house, then you aren't anything, apparently."

There's a lot  happening here outside of plot, as this book takes a look at (among other things) motherhood, family expectations, the true meaning of friendship, race, class, and domestic disruption on the home front due to the war.  At the same time, the focus on the criminal aspects here are very well done, and the suspense ratchets constantly through the novel.  It is so very well done on both inner and outer fronts, and I was so impressed with it that I couldn't put it down. It is highly intelligent and as I said earlier, I feel fortunate in having discovered it completely by chance.  I can seriously and highly recommend this novel to readers of vintage crime, and to readers who enjoy crime fiction written by women.  I promise - it's a story that will not be forgotten.