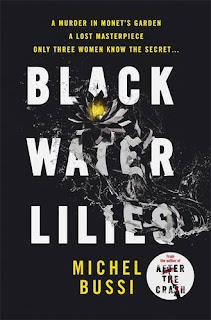 Midway through this book something came up in the reading that made me think about tossing it across the room, but then I decided to give it a chance because I was at the point of being heavily invested. Oh my gosh -- I'm so glad I did! It's  one of the most seriously twisty crime novels I've read in a very long time. Note I said "twisty" rather than "twisted" -- big difference.  Black Water Lilies is another one of those rare books where I was just plain speechless, overwhelmed, stunned, blown away and other words describing my complete surprise by the time I got to the end when I realized exactly what the author's done here.  And while I had some issues with the writing here, on the whole I say well done!!  People -- put this  book on your tbr pile right now.

It's a tough novel to summarize without giving anything away so I won't say too much more than what someone could find on the back cover blurb. The novel is set in the small village of Giverny, France, site of the home and gardens of artist Claude Monet, who had moved there in 1883.  There are three major players in this book -- an "octogenarian" widow through whom we get most of the story,  a beautiful young schoolteacher, and an eleven year-old girl,  Fanette, who is a gifted artist in her own right. 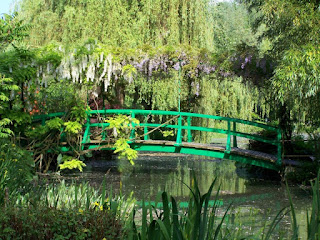 The story spans thirteen days, over which the secrets of this small village slowly come to light.  We don't wait long  at all until the body of opthamologist Jérôme Morval is discovered in a brook that meanders through Monet's gardens  -- he'd been stabbed, hit on the head with a rock and pushed into the water.  All the police have to go on is a postcard of Monet's painting Water Lilies on which was written "Eleven Years Old. Happy Birthday" with a strip of paper glued to the card saying "The Crime of Dreaming, I agree to its creation," which police later discover comes from Louis Aragon's Aurélien.  The police also discover that the married Morval was quite the ladies man, and begin to wonder if somehow his penchant for the ladies was cause enough to kill him.  Inspectors Laurenç Sérénac and Sylvio Bénavides also look into rumors that Monet may have secreted as-yet undiscovered paintings in his former home as a possible motive.  Speaking of Monet, read very carefully as you go through this novel  -- it's  not called Black Water Lilies for nothing.

There are parts of this book that tend to be boggy and I think a lot could have been left out to make it much tighter, but really, it's all about the ending.  When the reveal comes it comes in a big way, and I had to rethink every single thing I'd just read. My first thought was "holy crap -- that's genius!" and that's all I'm going to say about this book's plot. Any more would absolutely ruin things, and one of my online groups will be reading Black Water Lilies this month so I'm keeping shtum. Trust me, this is not your average police procedural, for which I am grateful.  It takes a strong writer to make this much of an impression, and I'm so damn picky about what I consider good crime reads, so that says a lot.

Would I recommend it? Hell yes!