the rare true-crime post: Anne Perry and the Murder of the Century, by Peter Graham 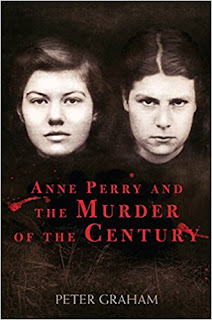 A long time ago, I watched Peter Jackson's film Heavenly Creatures for the first time and found myself captivated by the murder that inspired the film; since then I've watched it a number of times and just recently discovered the uncut version which I watched during a week when my husband was away on business. I'm not really a major true crime person, but there are some cases, like this one, that stick in the mind.  This case took place in the early 1950s in New Zealand, where, as the author tells us, "murder of any kind was a major event," and that at that time, there were maybe two, three murders a year.  He also says that Women who killed were rarities" and "As for teenage girls, matricide -- it was unheard of."

Lately my interest was reopened after reading Beryl Bainbridge's fictional take on the case, Harriet Said (1972), which changed the story but was most certainly loosely based on the Parker-Hulme case of 1954.  Then, one insomniac night a couple of weeks ago, I stumbled on a documentary about the case, which made me want to watch Heavenly Creatures again, which then made me look for a true account of the murder, which led me to this book.  I will say that as long as Graham sticks to the subject at hand, it's a book worth reading; it's when he goes off on tangents of details that I could have cared less about that I found myself tuning out.

Graham starts his story in the hours leading up to the actual murder itself, stopping at the point just before poor Honorah Parker's head is bashed in by a brick at Victoria Park in Christchurch.  Honorah Parker (known as Rieper at the time), her daughter Paulette, and Paulette's friend Juliet Hulme had just finished having tea at a tearoom before venturing off down the "east side bush track"; later the woman who served them, Agnes Ritchie, would say that the girls were polite and that there was "Nothing out of the ordinary." Some 30 or so minutes later, Mrs. Ritchie was shocked to see the girls again, this time


"breathless, greatly agitated, with bloody hands and clothing. One girl's face with spattered with blood and the other's finely speckled."

She then learned that there'd been some sort of terrible accident and that the woman who'd been with them not too long before was now "covered with blood" somewhere "Down in the bushes -- down the track," according to the girls, having slipped on some rocks.  Mr. Ritchie and his assistant went to find the woman but obviously it was too late when they arrived, since Honorah was dead.  While the girls had called it an accident, Ritchie realized that there were "no rocks anywhere near," and not too far from her head lay a "half-brick with blood and bits of hair on it."  The girls were taken to Juliet's home while police examined the scene; the investigators soon knew that this was no accident, but that "the deceased had been attacked with an animal ferocity seldom seen in the most brutal murders."   What was worse, however,  was that they also realized that  "this savagery was the work of two teenage girls," a "thought too shocking for words."

After this beginning, which, coincidentally, mirrors that of Heavenly Creatures,  Graham goes on to examine the lives of the two girls, both separately and together, in order to come to a conclusion as to why Pauline's mother had to die that day.  While I leave his findings for other readers to discover, using a number of different sources, most pointedly Pauline's own diary,  he paints a chilling picture as to what may have led up to that particular moment; he also goes on to look at the aftermath of the crime and its effects on the girls, the families, on the people in Christchurch, and its interest as the "murder of the century" that would later lead to plays, books, much debate, and a movie.   While he's focusing on all of that, the book is captivating and hard to put down, and there are great photos in this book that help bring it to life.  But I started finding my interest waning here and there as he throws in superfluous details that I could have cared less about (for example, the athletic prowess of the Hulme's attorney at his high school and then Cambridge, or the Hulme's psychiatrist's wife's love of theater etc., etc., and more unnecessary stuff down to what people were eating for lunch),  and it became a major skimathon to get back to the meat of the story.  Another thing: this book could have ended some 50-something pages earlier which would have, I think, made it a stronger piece of writing; my final niggle is that there are no footnotes. Sources are listed in the back but there are several spots where quotations are left unattributed and it drove me nuts. I know -- nerdiferous people such as myself are probably the only people who appreciate footnotes, but to me they're important and should be included in investigative pieces.


My biggest issue here is that I was not at all impressed with the change of title of this book, and in fact thought it a sort of cheap, exploitative publishers' trick. When originally published in 2011, it was called So Brilliantly Clever: Parker, Hulme and the Murder that Shocked the World;  when it came to the US it became Anne Perry and the Murder of the Century, which sort of bypasses the fact that there were two girls involved. It's also highly misleading: we don't discover the modern-day of Juliet Hulme as Anne Perry until very late in the book, at which point we also discover the post-prison identity (Hilary Nathan) of Pauline Parker. But where's Hilary Nathan in the title? Obviously the title change was done to sell more copies of this book since there are thousands of Anne Perry fans out there; personally speaking, I think it's a cheap tactic.

Having said all of that, however, while on topic  it is a book I'd recommend for anyone with an interest in the case who wants to know more about it -- Graham has done a pretty thorough job here that will answer pretty much any question someone  might want answered. It's actually one of the most chilling true-crime stories I've read.