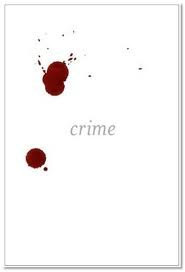 "The reality we can put into words is never reality itself."
-- Werner K. Heisenberg, epigraph

I watched the most interesting tv show last week on MHZ called "Crime Stories" and realized when the name Von Schirach popped up that I had this book on my shelves.   Instead of doing my normal thing where I read the book first, I stayed up late and watched the entire show; the next day I grabbed the book and started reading.   In the series the first episode grabbed me and wouldn't let go; reading the book was the same.

There are eleven short fictional vignettes here, all of which are linked by the concept of guilt. My understanding is that they're are all based on the cases of former clients of Von Schirach, who is a somewhat controversial German defense attorney and very well-known writer. This book, after its publication, remained  on Der Spiegel's bestseller list for 54 weeks, according to Wikipedia.   These are not your standard legal defense narratives by any stretch;  it is the circumstances leading up to the commission of each crime which informs the basis of each story.   It is also an exploration of not only what constitutes the idea of guilt,  but also what it is that lies at the core of each human in this book.  These people are not the sort of monsters one might expect in cases such as these; some of them make very bad judgment calls, some are driven by mental illness, while others, well, those I'll leave for readers to discover.   He also, I think, asks us to consider the nature of sentencing and justice -- given the human factors beneath what these people have done, is it right in every case to hand down a one-size-fits-all-by-law, prescribed sort of judgment?

The first story,  "Fähner," sets the tones of  both writing and discourse within this book.   The author employs a rather lean, unemotional sort of prose style to relate the tale of  a GP from Rotweil who, as the cover blurb notes, finally got a "reprieve" the day he took an axe to his wife's head.  But Fähner is no hardened criminal; as we're told at the outset his "life wasn't anything that gave rise to stories. Until the thing with Ingrid." The thing is, while we have the basic outline of Fähner's life with his wife, there are no detailed scenes between the two of them that allow us to see exactly what was happening; the author leaves it to the reader to read between the lines.   But there's a great scene in this story where, on the night before he turns 60, he looks at a photo of his wife taken during their honeymoon (one he'd salvaged and hidden after she'd thrown away  their wedding photos) , sits on the edge of the bathtub, and cries "for the first time in his adult life." It's the understanding that he comes to at this point that really allows the reader to see inside of his mind and to feel some empathy for this man; his story continues through trial, judgment and sentencing.  Throughout Fähner's experiences, and actually, throughout this entire set of stories, we are called upon to consider something Von Schirach's uncle once told him:  "Most things are complicated, and guilt always presents a bit of a problem."

As the author himself says,


"All our lives we dance on a thin layer of ice; it's very cold underneath, and death is quick. The ice won't bear the weight of some people and they fall through"

and it is that moment that interests him.  How many people in our lives  might be just a set of circumstances away from that moment is another thing we ought to consider; it's a point he makes very clearly in this book:

I was floored after finishing it, and there were moments in this book where I had to put it down and really think before I could go back to it.  Whether or not anyone will sympathize with the people in this book is an individual judgment call, but it is really tough not to feel something.  The book itself is  also an excellent use of crime fiction as a way to understand not only human nature, but also in offering insights into society itself.

Definitely recommended; not at all usual crime fare but something unique.
Posted by NancyO at 4:51 PM