*huzzah for the ladies: The Experiences of Loveday Brooke, Lady Detective 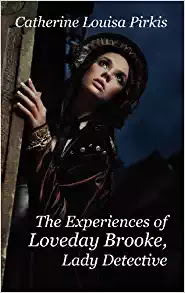 "Too much of a lady, do you say?...I don't care twopence halfpenny whether she is or is not a lady."

So says Mr. Ebenezer Dyer, the head of the "flourishing detective agency in Lynch Court.  In fact, he goes on to brag about his operative, Loveday Brooke, as having "so much common sense that it amounts to genius."  And that she does, often, it seems, moreso than the police or even her boss when it comes to solving a case.

Up to now in this "history of mystery" I've been doing, I've experienced two "lady" detectives, both of them characters sprung from male minds.   Loveday Brooke comes straight from the pen of Catherine Louisa Pirkis (1839-1910),  who would go on to write a total of thirteen novels, several short stories (aside from Loveday Brooke), and a novella.  She and her husband were very actively involved in the anti-vivisectionist movement as well as the National Canine Defence League, and she was also engaged in other types of humanitarian work.

Loveday Brooke as a fictional character fits squarely into the "New Woman" mold, a term which refers to


"a significant cultural icon of the fin de siècle, departed from the stereotypical Victorian woman. She was intelligent, educated, emancipated, independent and self-supporting."

Her significance as a New Woman detective is so important, in fact, that Volume IV of a series produced by Routledge  that explores New Women Fiction is completely dedicated to this character; since it's highly likely that while I'm very much into it, the state of fin-de-siècle Britain's pre-feminist women's literature is probably not a hot topic for a number people reading this at the moment, I'll leave it to anyone at all interested to read Adrienne Gavin's introduction  here and get right to the book.


We actually learn very little about Loveday Brooke herself here.  We know that she was "a little over thirty years of age" that she dressed "invariably" in black, her dress "almost Quaker-like in its appearance."   Of her backstory Pirkis writes that


"Some five or six years previously, by a jerk of Fortune's wheel, Loveday had been thrown upon the world penniless and all but friendless. Marketable accomplishments she had found she had none, so she had forthwith defied convention, she had chosen for herself a career that had cut her off sharply from her former associates and her position in society.  For five or six years she drudged away patiently in the lower walks of her profession; then chance, or to speak more precisely, an intricate criminal case, threw her in the way of the experienced head of the flourishing detective agency in Lynch Court." (8)

Her boss seems to have been a shrewd man; he realized her worth quickly and "threw her in the way of better-class work," which meant better pay.    Over the course of the seven stories in this book, her "common sense" that "amounts to genius" is reflected in the way she not only comes up with solutions to each mystery, but also in the way that she refuses to go along with the police or with the victims of each crime who immediately settle on "foreigners" as the guilty parties. Xenophobic attitudes of the period are writ large here, by the way, but to her credit, our heroine has an ability to see right through them.   She is also not the sort of female detective who needs to rely on seduction as a tool for getting close to suspects, relying mainly on her keen sense of observation and her wide-ranging understanding of human nature.

I have to say that one thing readers might notice is that in most of these stories it doesn't seem like Brooke is doing much "detecting" -- that she goes on scene, takes in a few details and then dazzles us with her observations.  That is true in more than one case and it has caused readers to complain about the lack of "fair play."  I had to go and look up the concept of "fair play," and learned that the so-called "rules" involved in "fair play" were not codified until 1928, so really, in my opinion it doesn't apply here.  There are a couple of very good stories here, none the least of which is "The Redhill Sisterhood," in which Loveday is sent to spy on a "home for cripples" (you really have to look beyond the language here) in order to try to figure out the connection between the nuns who run the place and a string of country house robberies.   That one was just great, for several reasons I won't go into in case anyone decides to read the book.  I will also mention that I completely sussed the solution to "Drawn Daggers!" not too far into it, but for the most part, the big reveals were complete surprises.  However, because this collection of tales is a product of the late Victorian era, I would advise a bit of patience while reading.  The stories are good, not great, but to me it's all about Loveday Brooke herself, making her way in what was normally a male profession, often doing a much better job than her male counterparts in this book.