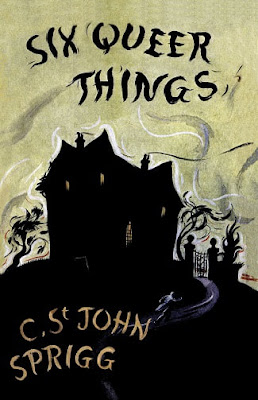 "... the whole web of horror behind them had been brought to light; but somewhere there still lurked the spider who had spun it all..."

The word sinister doesn't even begin to describe what happens in this book.  Originally published in 1937, The Six Queer Things is definitely not your average Golden Age mystery novel; in fact, I can honestly say that I've never read anything quite like it.  It is not only sinister, but it is also one of the most claustrophobic novels I've read from this period, and the author keeps you guessing right up until the last four pages before ending it on a most cruel note.   Before getting to that point, however, this story takes some unexpected and bizarre twists and turns, and the answer to who can be trusted here changes on a regular basis. The only times I put this book down once I started was for sleep and a session at the gym, and I had to make myself do both.  The best way to describe it is that it's like reading an ongoing nightmare from which there is little chance of escape.

Marjorie Easton has been living with her uncle Samuel Burton since the death of her parents. He is described on the cover blurb as miserly, but Marjorie

"had had a long first-hand experience of absolute absorption in himself, his pettiness, and the supreme importance he attached to money."

She works as a junior typist, making only enough for personal needs with anything left over going to directly to her uncle.  He constantly reminds her of the fact that he had "fed, clothed and educated her," and that she owes him.  The bright spot in her life is her boyfriend Ted, but they can't marry until Ted feels he has enough money to take care of her properly.  Marjorie can't wait to get away from Uncle Samuel, so when she is offered a job that pays much more than she currently makes, she jumps at the opportunity.  The offer comes about as result of a chance meeting, and she finds herself in the employ of Michael Crispin, who takes her on as a sort of research assistant.  As it turns out, Crispin is a well-known medium, and along with his sister Bella, holds regular seances at the family home where Marjorie is expected to live while in their employment.   It is during one of these seances that Marjorie finds herself the object of a visit from the great beyond; soon Marjorie begins to believe that she herself has some psychic gifts of her own.   She sets herself apart from Ted to work on her psychic abilities, and Ted isn't too happy.  Worse, Marjorie's focus on her mediumistic tendencies leave her headed for a breakdown, further separating herself from Ted while she is under medical care.  But everyone's life is upended when Crispin suddenly dies just after a seance; from there this story takes on a life of its own as the police try to figure out who killed Crispin and why.  But this is, as I said, no ordinary mystery and while the police are doing their job, both Marjorie and Ted become locked into frightening nightmares of their own. 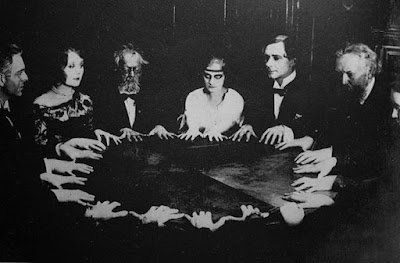 The New York Times review blurb quoted on the back of my book says that it is "Mystery and horror, laid on with a trowel," and that's about right.  It is filled with nice Victorian Gothic flourishes as well as contemporary policing, but at the heart of this story lies a most sinister plot with a villain who, even when "the whole web of horror...had been brought to light," still remains the unknown and mysterious "spider who had spun it all" from the beginning.

Hats off to Valancourt yet again for finding and publishing something quite out of the ordinary.  When I say that this book is unputdownable, I'm not kidding.  This book has it all -- a bit of meandering into the realm of the occult (and a sideways commentary on spiritualism in general by the author underneath it all),  a claustrophobic atmosphere that doesn't let up, and a strange mystery at the heart of it all  that will keep you turning pages because once things take that turn toward the strange nightmarish story it becomes,  you will absolutely want to find out what kind of mind it is that could dream up such sheer evil. And while it's probably not going to join the ranks of the greatest literature or greatest crime novel ever written, for me it all comes down to the fun I had while reading it.