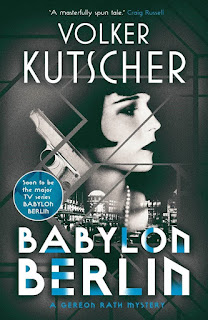 Read earlier this month.  Actually, Babylon Berlin is a book I didn't even know existed until I watched the Netflix series with this title a few weeks back.  When I saw that it came from a book, I knew I had to read it.  I also have the second one, The Silent Death, sitting here but it will have to wait until I return from vacation.  Speaking of the Netflix series, anyone planning to read this book should know right up front that the book is not the series -- they are two very different entities, so a word of warning:  don't expect the novel to be a mirror to the television show.

If you don't make comparisons in your head as you go along, giving the book a chance to speak for itself,  this first installment of the series featuring Gereon Rath makes for a pretty darn good read.  It is set in 1929 Berlin, during the waning years of the rather decadent Weimar period, and is our introduction to Inspector Gereon Rath, who has come to Berlin from Cologne and has been assigned to the Vice division, thanks to his father pulling the right strings after he suffers a major disgrace in his home town.  While Rath is busy keeping down porn and making his way through the city's underground nightclubs, the Homicide Division is struggling with the case they've nicknamed "Aquarius." It's a case that is driving the division crazy; they have very little to go on aside from the fact that their victim was tortured before he died of a heroin overdose and the car he was in was sent purposefully into a canal.

In the meantime, a tangle in his lodging-house room one night with a Russian man sets Rath on the trail of the prior tenant, who has dealings with underworld gangs and anti-Stalinist communists.  It's then that he hears the strange story of smuggled Russian gold, but more importantly, his own secret investigation, plus info he gets from Charlotte, a young Homicide department stenographer, gives him what he feels might be the upper hand in the Aquarius case -- a  "nasse fisch," (wet fish) --  now a case "put on ice."   Solving the case on his own is especially important to Rath for his own reasons -- he can't stand the "arrogant homicide detective" running Aquarius, and with his knowledge that he keeps to himself, he "looked forward to the day when he could show him up..."  But he's also carried a lot of baggage from Cologne to Berlin, which has some personal bearing on the importance of solving this case.

Everything is looking great for this young and ambitious Inspector, right up until the time when things go horribly wrong, putting both his career and his life in serious jeopardy.

Political struggles on the streets, seedy underground nightspots run by rival gangs, rival Communist factions, all pale in comparison to the real story here, which is the corruption that permeates all levels of this city.  For Gideon, who's still getting used to how things work in Berlin, trying to figure out who exactly he can trust also becomes a major issue. He's in an unusual spot of being both insider and outsider; he has no interest in politics, and in a very big way he comes across as being rather naive.

First novels in a series are generally the weakest, but this one is actually quite good.  I mean, the reality is that there is a book two and beyond so we know things are going to work out, but I swear, I was on pins and needles throughout,  wondering how Rath was going to fare.  But there's also the element of the here and now in this city that captured my attention; there are brief mentions of Hitler and of Nazis but this is a very "in this moment" sort of book that doesn't really give any clue as to where Germany will go in the next few years.

One reader noted that this book reminded her of the novels of Marek Krajewski, but I'm not sure I agree with that assessment -- Krajewski's work gets down into the deepest decadence of this period in ways that this book and author never do.  I've also seen more than one comparison of Babylon Berlin to the work of Philip Kerr, but again, I don't think that's exactly accurate either. And to those readers who found this book "too long" and "tedious," well, there's also a graphic novel available.

If you can divorce yourself  while reading this book from the stunning Netflix series, it turns into a very good read.  Otherwise, you may be setting yourself up for disappointment since aside from people and a couple of plot elements that carry from page to screen, the two are very, very different.  Do not miss the series though; unexpected twists in every episode will keep you glued and wanting to binge.

On to book two.