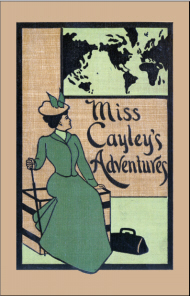 
Continuing on with my look at crime/mystery/detective novels of yesteryear, Miss Cayley's Adventures presents a bit of a surprise.  To be very honest, I hadn't heard of it until 2016 when it was republished by Valancourt, and even then I bought it and shelved it thinking I'd get to it sooner or later.  As I began to research exactly what books I wanted to read in my little independent survey here, I kept coming across this title, so here we are.

Because I don't really read reviews or too much in the way of plot synopses before I pick up a book, I assumed this book was going to be another Victorian work of the exploits of a  female detective much along the lines of the previous ones I've read and talked about here. But no -- with Miss Lois Cayley I got way more than I bargained for.  She is, like Loveday Brooke, an example of the "New Woman" of fin-de-siècle Victorian literature; at the same time, unlike Loveday Brooke, Miss Cayley does not make detection her specific profession. She is 21, has just finished her studies at Girton College and although (according to her friend Elsie Petheridge) her next logical step would be to teach, Miss Cayley is not at all interested in becoming one of the group of "dear good schoolmistresses."


Instead, she views herself as "a bit of a rebel," and has devised a plan of


"going out, simply in search of adventure. What adventure may come, I have not at the moment the faintest conception. The fun lies in the search, the uncertainty, the toss-up of it."

She also has only twopence in her pocket, but has made up her mind to "go round the world."  Her first opportunity for adventure arises when she overhears a "Cantankerous Old Lady" complaining loudly about having lost her maid just as she's about to go abroad and head for the waters at Schlagenbad.  Lois offers herself as traveling companion to the woman, Lady Georgina Fawley, to travel with her and to stay for one week, giving Lady Georgina plenty of time to find a replacement maid. After all, as Lois considers,


"The Rhine leads you on to the Danube, the Danube to the Black Sea, the Black Sea to Asia; and so by way of India, China, and Japan, you reach the Pacific and San Francisco; whence one returns quite easily by New York and the White Star Liners... the Cantankerous Old Lady was the thin end of the wedge -- the first rung of the ladder!"

Lady Georgina accepts, and Miss Cawley's journey begins; she proves her worth early on, even before they arrive in Germany, by thwarting the theft of Lady Georgina's jewels by a fellow passenger whom she knows only as "The Count."  This is only the first of many adventures that will befall Miss Cawley as she makes her way to several destinations; along the way she will compete in a cycling competition against German army soldiers, take on a mountain rescue when Lady Georgina's nephew takes a nasty tumble and can't climb back up, unmask  a bogus faith healer, take part in a tiger hunt, and much, much more. Her detection skills serve her best when they are most needed, especially at the end of the book.


One thing that the author does very carefully here is to discern between connotations of the word  "adventuress."  This is one of the main themes running throughout the book, beginning with Lady Georgina's worries that her nephew Harold (who has fallen for our heroine and wants to marry her) will be tempted by "some fascinating adventuress" who will "try to marry him out of hand," and that she must make sure that he is saved from "the clever clutches of designing creatures." Lois considers herself an "adventuress," but not in the negative term as set forth by Lady Georgina -- but because of what his aunt has said, feels the need to refuse Harold's proposal of marriage. As she says:


"I dare not tell you how much I like him. He is a dear, good, kind fellow. But I cannot rest under the cruel imputation of being moved by his wealth and having tried to capture him."

To put it briefly into context (and just FYI, I find I get much more out of my reading by doing so, not because I want to be an "authority," but to make myself a more informed reader), according to Joseph A. Kestner in Sherlock's Sisters: The British Female Detective 1864-1913, the author here is offering a repudiation to an essay written by the "virulently anti-feminist" essayist Eliza Linn Lynton, whose "animosity towards....the New Woman" was noted even in her obituary.  She referred to them as "Wild Women" who had about them "an unpleasant suggestion of the adventuress."  While Linton's name appears in the text of Miss Cayley's Adventures, it seems that, as Kestner notes, "many aspects of Lois Cayley's character seem created to challenge the predispositions of opponents of the New Woman." (124)  And once again, as in the case of Loveday Brooke, we find the question referring to the meaning of "ladylike"  come up more than once.

Miss Cayley's Adventures is a surprisingly fun hybrid of detection, travel narrative and adventure, with a bit of romance thrown in, but it's so much more. The words "plucky heroine" come to mind, but that's really sort of belittling what the author does here with his lead character.  It's a book I could chat about for hours, and is a refreshing and never-dull  take on the Victorian New Woman, but there's much, much more going on here as well.   And the fact that it was written by a man makes it even more interesting, in my opinion.

While my copy is from Valancourt, it is also available online at Project Gutenberg. Very much recommended, especially to those looking for something different in their reading or for early detective novels featuring an independent woman as a lead character.  It's also a book to just relax and have fun with while looking forward to whatever adventure waits around the corner for our Miss Cayley. Dear reader,  I loved her.