The Neighborhood, by Mario Vargas Llosa 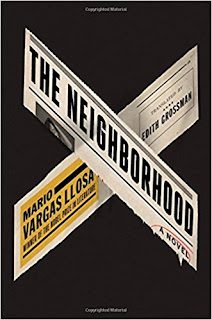 I'm posting about this book here because the dustjacket blurb says that it's a "crime thriller."  While there is a crime (a murder, as a matter of fact), the book is certainly much more than just mere crime-fiction fodder.   I will say right up front that in terms of the writing,  The Neighborhood is nowhere close to the excellence of his other books (Feast of the Goat and Aunt Julia and the Scriptwriter spring to mind immediately); having said that though, I think it is a book worth reading,  most especially because it comes down to the question of journalistic integrity in a country rampant with corruption.

We're in Lima during the 1990s when Peru was under the leadership of Alberto Fujimori. The topics that "obsessed every household in those days" were


"the attacks and kidnappings of the Shining Path and the Tupac Amaru Revolutionary Movement, the MRTA, the blackouts almost every night because electrical towers had been blown up, leaving entire districts of the city in darkness, and the explosions the terrorists used to awaken Limeños at midnight and at dawn."

Citizens are under curfew; many business people have fled the country taking their money with them.  Not so Enrique Cardenas -- "Quique to his wife and friends" -- an engineer who has made his fortune in mining.   He is visited one day by the editor of a "yellow" magazine by the name of  Rolando Garro, who tries to blackmail Quique with photos that reveal Quique's participation in a drug-fueled orgy some time back.  Garro had been in journalism for some time before he found his true calling, "to use as he pleased and  help to ruin without pity," and he was popular among a


"public delighted to follow his revelations, accusing singers and musicians of being faggots, his morbid explorations of the private lives of public persons, his 'first fruits' exposing the base and shameful acts that he always exaggerated and at times invented."

Enrique doesn't pay and the photos are splashed all over the front page of Garro's magazine Exposed. The scandal that follows is bad enough for Enrique, but when Garro is found dead close to the neighborhood known as the Five Corners "the navel of Barrios Altos" and "one of the most violent neighborhoods in Lima,"  Enrique becomes a suspect, things quickly get worse.  But the murder also has other  outcomes that will land squarely on the shoulders of Garro's star reporter, Julieta Leguizamón, aka Shorty.

It doesn't take too long before the reader notices that this book is split into two very different worlds. The author begins in that of the Cardenas family and their friends, who live in the lap of luxury,  own properties and go for weekends outside of the country, and who are free to indulge in some rather hedonistic pleasures (including the sex scene that opens the novel which occurred because of the curfew).  The two women in these families seem bored and in need of distraction.   Their money cushions them from the realities of the hardscrabble life of the residents on the streets of Barrios Altos,  the world inhabited by people like Shorty and by Juan Peineta, a former popular, well-known reciter of verses (including those of Neruda) who used to have his own radio show and now waits in line for his single meal of the day at a local convent.   But corruption knows no boundaries in this book -- it permeates through this city at all levels.

Aside from the unnecessarily long, drawn-out sex scenes (which I didn't like at all, but I got the point) and the unnecessary subplot attached to them, The Neighborhood is a good, not great book, which when all is said and done, for me comes down to a question of journalistic integrity and truth amid a climate of corruption.  And although it's set in the 1990s, it is highly relevant at the moment, an even better reason for reading it.