*2 Detectives: Astro, the Master of Mysteries, by Gelett Burgess and Dr. Xavier Wycherley, The Mind-Reader, by Max Rittenberg 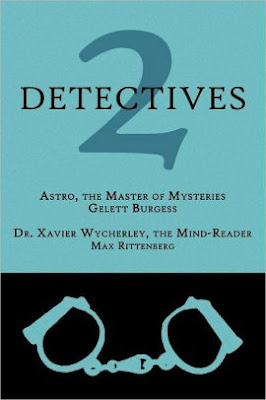 My latest stop along my journey into crime/mystery fiction of yesteryear brought me to this book, which despite its hefty weight and 600-plus page length turned out to be an ahhhhh read.  First of all, these books are early examples of stories in the psychic detective zone (Astro, The Master of Mysteries was published in 1912; Dr. Xavier Wycherley, The Mind-Reader came out in 1913); second, they both have this lovely early pulp vibe, and the third reason is that the plots of these stories are so out there that reading them is just pure pleasure for someone like myself who thrives on this stuff.

Even heftier than the weight of this book, the true title of Astro, The Master of Mysteries goes like this:

The Master of Mysteries; Being an Account of the Problems Solved by Astro, Seer of Secrets, and His Love Affair with Valeska Wynne, His Assistant

and there they are, the two main characters.  Of course, there's much more to this book than the romance between Astro and Valeska; in fact, we only pick up a vague idea of his feelings for her as the stories progress, right up until the very end when he starts dropping not-so-veiled hints.  In the publisher's note before the beginning of Astro, The Master of Mysteries, we're told that when this book was first published in 1912, it was done so anonymously.  It also provides another clue:

"The Introduction ... suggests there are three cryptograms hidden in the text. Two of these are known and easily discovered. (The first provides the name of the author, Gelett Burgess.) The third cryptogram remains a puzzle."

In  Classic Mystery Stories (Dover, 1999)  editor Douglas G. Greene provides the way to solve the first two cryptograms, but goes on to say that he doesn't believe that anyone has "yet discovered the third cypher."  So we know we have mysteries within a book of mysteries before we even turn the first page.  Greene also reveals that


"Victor Berch, the scholar of popular fiction, has discovered that the Astro "Seer of Secrets" stories, were first published in 1905-1906 issues of The Sunday Magazine under the pseudonym Alan Braghampton"

and that Astro's real name is Astrogen Kerby. (131)  For a quick look at an Astro story published under the name of Braghampton, you can click here.

While I won't go into the twenty-four stories specifically, Astro is a medium whose spiel runs like this:


"...there are waves of the ether, --N-rays, X-rays, acitinic and ultraviolet vibrations, to which I am exceedingly susceptible.  I have an inner sense and an esoteric knowledge of life and its mysteries that is hidden from all who have not lived for cycles and eons in solitude and contemplation with the Mahatmas of the Himalayas!"

He is adored by New York society, wears a turban and robes, and is fond of the hookah; he often refers to himself as the "Mahatma of the Fourth Sphere," is a "skilled and artistic musician," reads constantly,  and has a working knowledge of most subjects.  He's also a complete fake, aided by his assistant Valeska, and as the book goes along, he schools her in the art of his own charlatanry, all the while dropping hints to her that he's in love with her. Together, and often with the help of a police detective whose career Astro has helped to boost, they solve a wide-ranging variety of different mysteries that make for hours of fun reading.

Next up is Max Rittenberg's Dr. Xavier Wycherley, The Mind-Reader.  Wycherley is an interesting character who blends science, psychology, and his ability as a "mental healer" in solving problems, but he detests the idea of being considered as a detective. As we learn,


"Detective work was strongly distasteful to him unless it were to open out fresh experiences in the realm of the human mind."

He can also astrally project, but it's his reading of auras that often provides all he needs to know about a subject.   According to Robert Sampson in his Yesterday's Faces: A Study of Series Characters in the Early Pulp Magazines Volume 2: Strange Days, (Bowling Green University Popular Press, 1984),   Wycherley made his first appearance in The London Magazine in March 1911, finding his way ("leaped the Atlantic," as Sampson says) into The Blue Book  later that same year.  (47)

Wycherley refers to himself as a "specialist," but notes that his name would "not be found on the British register...", and that he is called upon throughout the world, "wherever there is call for my services as a mental healer."  As Rittenberg explains,


"The mental healer was a combination of scientist and humanitarian which is far from usual. As the latter, his warm human sympathies went out unceasingly to the weak, the oppressed, the suffering, the sick of body and the sick of mind. But as a scientist he would for the time being forget the patient in the subject."

We also learn that in his "younger days" he had to fight the "intense" prejudices of the English medical profession against "anything approaching hypnotism or mental suggestion..." and even though he's not on the registers, he keeps a consulting room in London. He also has a villa on the private Isola Salvatore on Lake Rovellasco where his patients often come for help.  He moves in and out of the highest circles of society and government, and for the most part, in his quest to heal minds (his life's work), often leaves it to people to do their duty, to do what is right.  This particular characteristic of Wycherley's is quite interesting, and says a great deal about the Edwardian milieu in which Rittenberg wrote.  As far as the stories go, they take him to several different places, with a wide variety of cases.  The first case, for example, finds him at Isola Salvatore where he does something that reminded me of Eternal Sunshine of the Spotless Mind; while later he'll find himself in Felsbrunnen where he is thrust into the midst of a most bizarre and dastardly secret in an old castle.   He does have a strange quirk: he will sort of put himself into a trance to puzzle out a problem, often locking out the outside world except for the pain caused by a lit cigarette burning in his hands that wakes him up and brings him back around.  The cases themselves are most interesting, as we watch this man combine science, psychoanalysis, and often (it seems) downright mysticism to bring about some sort of resolution.  These are absolutely not your average crime stories, and well worth reading to serious pulp fans or fans of stories involving scientific or psychic detectives

Hats off to Tim Prasil at Coachwhip for collecting these two very obscure books and putting them into one volume.  I had so much fun here, although it did take me a while to warm up to Dr. Wycherley until "The Countess Plunges," which has such an amazing solution that I couldn't help but to be impressed.  Astro, on the other hand, I loved immediately, because you know right from the start that he is a complete fraud, and the fun is not only in watching how he solves the cases he's given but also in watching him teach Valeska his bag of tricks.   The book as a whole is most likely a niche read for diehard early pulp fans and people like me who are interested in off-the-beaten-path kinds of early crime/mystery fiction, but anyone who falls into those categories will absolutely love this book.

Recommended for fellow niche readers.  Have a great time with it -- I certainly did.