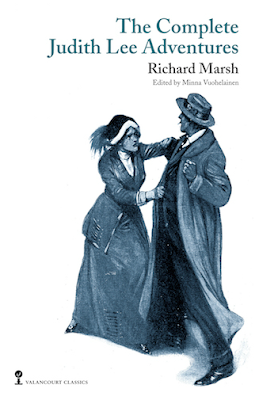 "Judith Lee is a young woman who calls herself a teacher of the deaf and dumb; in reality she is the most dangerous thing in England." -- 371

In August, 1911 the popular magazine The Strand (Vol. 2, #248) first began to serialize the adventures of a young woman in a short story written by Richard Marsh (1857-1915) called  "Judith Lee. Pages from Her Life: I -- The Man Who Cut Off My Hair."  The book is really one of a kind in terms of the literary female detective to this point in time; it is also a stunning collection that is very much a valued addition to my own home library of early crime/mystery fiction.

Judith Lee is a "teacher of the deaf and dumb," and uses what she calls "the oral system -- that is the lip-reading system" in her work.  Her father was, in fact, "one of the originators" of the system; her mother was deaf with a speech impediment "which made her practically dumb," but through lip reading quickly became able to understand what people were saying and to speak. As a result,  Judith has "lived in the atmosphere of lip-reading" all of her life.   Beginning with "The Man Who Cut Off My Hair," an adventure that she recounts as having taken place when she was a young girl, "this knack of mine," as she says, has led her into "the most singular situations ... the cause of many really extraordinary adventures."


Over the course of these twenty-two adventures, Judith Lee will tackle (among many others)  jewel thieves, a bride with a penchant for disappearing, the Mafia, the theft of deadly curare, mysterious deaths in a lonely house;  while the stories are great, it's really Miss Lee that drew my interest throughout the book.  She is fiercely independent, has no plans or desire to marry ("Never, never, never!")  and travels the world as part of her work. She says of herself that she is a "woman, but no weakling," and takes lessons in jiu-jitsu as part of a duty to "keep my body in proper condition."   Her "gift," which includes being able to read lips in multiple languages, gives her the ability of "entering into people's confidence," but she expresses ambivalence about it at times.  For example, in "Eavesdropping at Interlachen," she says that


"There have been occasions on which, before I knew it, I have been made cognisant of conversations, of confidences, which were meant to be sacred, and, though such knowledge has been acquired through no fault of mine, I have felt ashamed, just as if I had been listening at a keyhole, and I have almost wished that the power which Nature gave me, and which years of practice have made perfect, was not mine at all."

However, she goes on to acknowledge that "there have been times indeed when I was very glad indeed that I was able to play the part of eavesdropper."  Sometimes her eavesdropping becomes intentional as she notices people who just look wrong (for example in "Conscience"), and often she has "premonitory little shivers" which she feels are sent to her "as warnings," as in "Uncle Jack."  While some of the adventures in this book begin with Miss Lee trying to right a wrong, as in the case of a men wrongly sentenced to death, she also describes herself as "Nemesis," thwarting evildoers to the point of gaining a reputation among them, as noted in "The Finchley Puzzle:"


"Judith Lee is a young woman who calls herself a teacher of the deaf and dumb; in reality she is the most dangerous thing in England."

I didn't discuss these stories in any detail for a reason since this is a book that should be gone into with very little awareness of what they entail. The Complete Judith Lee Adventures is a joy to read, and in this edition we have the great fortune to have an excellent and most eye-opening introduction by Marsh scholar Minna Vuohelainen, who has written extensively on her subject, and who examines not only this book, but puts it into context along with Marsh's other work.  She also quotes Kestner's Sherlock's Sisters, which no aficionado of early female detective fiction should be without; he goes into the Judith Lee stories extensively as well.  It is truly one of my favorite crime/mystery reads this year, and I can't recommend it highly enough.


note:
While I hate to draw attention away from Valancourt Books, there is another edition of Lee's complete adventures available from Black Coat Press, who is also in my top tier of small, independent publishers.
Posted by NancyO at 12:25 PM