and now, the '50s, part one ... Ordeal by Innocence, by Agatha Christie 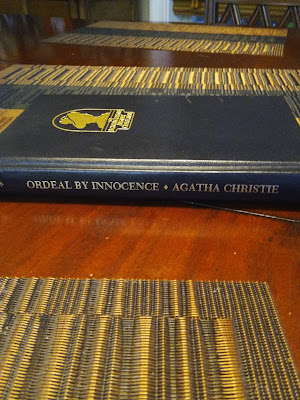 A few weeks ago when the spouse was away on business, I decided to watch the latest television adaptation of this novel, which I hadn't read for some time.  At the end (cover your eyes and scroll down a bit if you haven't seen the tv version), when the murderer was revealed, I absolutely screamed out loud, because the television powers that be had actually changed the who.  I was like "I don't think that's how it went," and  because my brain works like this, I looked up other tv versions after finishing that one and was even more surprised to find that someone thought it a good idea to bring Miss Marple into the case.  Good grief. I get creative licence, but sheesh!  As it turns out though, the more I  thought about this latest version, the more I believed it actually worked; that last scene is one that played through my head throughout the night I'd finished watching -- it was downright creepy.  And then, because my brain works like this, I had to go and take my copy off of its shelf and give it a read, and here we are.

Although my very sweet husband surprised me with the set of Bantam leatherette editions of Christie's books some time ago, I do tend to miss the covers of the latest versions, like this one

but in the end, it's what's inside the covers that matters.  And while I see that  a lot of readers don't agree with me, this is a good one.  I get that for many people the draw in a Christie novel is Poirot getting his little grey cells all stirred up or waxing his moustaches, or Miss Marple innocently knitting away while taking stock and careful observation of everything and everyone while the cops tend to flounder, but the non-detective novels can be just as good, in my opinion.  Ordeal by Innocence begins two years after Jack (Jacko) Argyle was sentenced for the murder of Rachel Argyle (the woman who had adopted him and the other children who became his siblings as young children).  All of the evidence pointed directly to him, but Jacko had always sworn that he had an alibi.  According to him, he'd been hitchhiking into town, and had been picked up about a mile away from home at a time that would have made it impossible for him to have killed Rachel. He never got the driver's name, nor could he remember the make of the car.  It wasn't an alibi that held up, however, and Jacko was found guilty and was sent to prison, where he died of pneumonia only a few months into his sentence.   The family, to put it concisely, had "no doubts" that Jacko had been guilty, and over the last couple of years life had gone on at Sunny Point.  However, with the arrival of a certain Dr. Calgary, the residents of Sunny Point are in for a shake up as Calgary declares that he was the man in the car, and that Jacko "couldn't have done it."  At the same time, Calgary is surprised at the family's reaction to the news that Jacko was innocent.  Asking Hester Argyle if she doesn't want her brother's name cleared," or for Jacko to have justice, her reply leaves him a bit stunned:

"What does it matter to Jacko now? He's dead. It's not Jacko who matters. It's us!"

She then goes on to say something that will define the rest of this entire story:


"It's not the guilty who matter. It's the innocent."

It takes him a while, but Calgary begins to understand exactly what he's done here:  if Jacko wasn't responsible for Rachel's death, then the murderer must be one of the remaining Argyle family.  In trying his best to not only set things right but to also help to lift the cloud of suspicion he's brought to Sunny Point, he hangs back, observes, and slowly begins to try to find the person who really killed Rachel.

While this book's premise is very different,  in terms of subject matter Ordeal by Innocence reminds me a bit of Christie's Crooked House, in which an outsider is brought in to help get to the truth of a murder in the family, precisely because one of the family hopes to negate the idea that "it could be one of us." Here though, there's a bit more happening beneath the story's surface; as just one example, nature vs. nature is a big theme that is explored using the lives of the Argyle siblings, all of them adopted, and while we might think nowadays that this is sort of old hat, don't forget that this book was written in the late 1950s so it opens a small bit of a window onto a particular mindset of a particular time.   There's more, of course, especially in trying to fathom Rachel's personality, which is an excellent psychological study unto itself.

Yes, the Poirot and Marple books might be more of a joy to read, but I found myself enjoying this book once again after having read it some years back.  Ordeal by Innocence is much more on the psychological/human nature side of things, and it works very well.  Recommended, especially for dedicated Christie fans.