According to the Evidence, by Hugh Pendexter 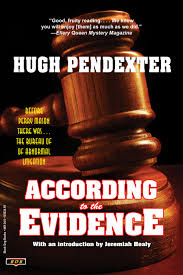 Continuing my look at crime fiction and mysteries just up to the end of World War I, today's book is a collection of short stories by pulp author Hugh Pendexter, whose historical fiction is legendary.  Before I go on, I have to take my hat off to the blogger at Pulpflakes, who found way more than I did about this author.

According to the Evidence is a compilation of tales about a law firm known as The Bureau of Abnormal Litigation.  As author Jeremiah Healy writes in his introduction, these stories serve as a "window into our legal fiction of the early twentieth century."  The Bureau, which is often "called upon as a last resort in many peculiar cases,"  is headed by a certain Ezra Stackpole Butterworth, who sees himself as a


"foolish, benevolent old man, who tries to help stupid humanity out of trouble."

He has "mastered the peculiar happenings of life," and will only accept cases which are "abnormal," having always been


"attracted to the unusual phases of life, called abnormal because so little observed."

When he first came to the law as a profession, he noticed


"many instances where the exact truth would have saved a case, but was ignored because of a fear it might not be believed, or because it impressed counsel as being trivial,"

leading the Bureau to often refuse retainers in the "absence of any unique ingredient."   Butterworth's  fame has spread to the point that when reporters discover that he's going to be taking on a particular case, it is "sufficient to set the press-table to buzzing," while leaving the DA to wonder about "the inevitable surprise" that's sure to come.   Butterworth is not a detective, but he's sharp as a tack and doesn't miss a trick. He has an assistant, Jethuel who he often puts to work as a sort of private investigator, and another member of the firm who was invited to join the  Bureau to "look after the criminal branch" of the business.

Throughout the course of the thirteen cases the Bureau tackles in this book, circumstances are indeed a bit strange.  In "The Death Cup," for example, there's the statement of the maid who swears she she saw "one or more eyes" staring at her as she stumbles upon a dead body; in "According to the Evidence" (one of my favorites in this book),  an alienist's testimony as to the sanity of his client is called into question as he is forced under oath to relate his own strange visions, and in "Circumstantial Evidence," a pianist dies of a gunshot wound while alone in his apartment.    The shorter stories are fun, but the centerpiece in this book is definitely the novella-length "The Crimson Tracks," which not only has an entertaining mystery involving a strange manuscript, red footprints that come and go, and some pretty quirky characters, but also, given the time, a most ingenious solution to this bizarre case that I never saw coming.


Pendexter's stories filled pages and pages of pulp magazines over the years, and luckily the good folks at Black Dog Books have taken the time to put some of these stories into collections like The Bureau of Abnormal Litigation, and  I have another anthology of Pendexter crime tales sitting on my shelves, The Voice of the Night, the stories of Jefferson Fanchon, "Inquirer"  in which Pendexter pits his crime solver against  an evil crime genius plaguing New York.

Bottom line: this book is a fun example of early pulpy crime fiction that would probably appeal to readers who are really into this sort of thing as well as readers of vintage crime who haven't yet discovered Pendexter.    Despite the title there's nothing supernatural about these tales -- just good old fashioned crime solving with a fun premise and a few curveballs thrown in to a) make the cases interesting and b) make the reader chuckle every now and then. I can see that it might get a bit tedious at times for readers of modern crime, but it's solidly right up my pulp-reading, fiction comfort-food alley.