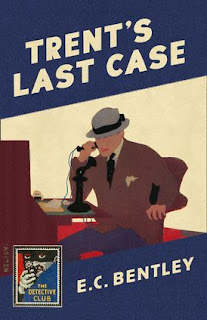 
"This mystery is all wrong."

In John Curran's introduction to this edition, he refers to Trent's Last Case as "one of the most famous milestones in the genre."  He quotes EC Bentley from his autobiography, Those Days (1940) where he writes


"Some time in the year 1910 it occurred to me that it would be a good idea to write a detective story of a new sort..."

and, "among the dozens of detectives" (long dominated by and modeled after Sherlock Holmes) currently filling magazine pages in a market that was "thriving," as Curran notes, "the stage was set" for just that.  Enter Philip Trent.

Trent is an artist who does fairly well, and also works from time to time as a journalist.  It is in this role that he becomes involved in the case of the death of American businessman Sigsbee Manderson, the "Colossus" of Wall Street, a man whose number one concern was the accumulation of his own wealth, often becoming "lawless or ruthless" in the process.  He's someone that no one will likely mourn, most especially the "tens of thousands of the poor;" in his lifetime he is "execrated" by the "financier or the speculator" as well.   And as Trent himself will come to remark later,


"Here's a man suddenly and violently killed, and nobody's heart seems to be broken about it, to say the least."

Trent's work in journalism has brought him a reputation for having "great powers as a detective," with "past successes" in solving cases which have left the police stymied.  However, in writing his detective as someone "as far away from Holmes," as possible, Bentley's Trent has good relations with the police, who are not an object of scorn or derision, but rather people with whom Trent has no problems in terms of cooperation.   In this case though,  even Trent has not-so-positive feelings about investigating Manderson's death; as he says,


"I tell you frankly, I wouldn't have a hand in hanging a poor devil who had let daylight into a man like Sig Manderson as a measure of social protest."

But he takes on the case anyway and despite a number of suspects and theories, he quickly comes to a solution.  However, he encounters complications that lead Trent to question his confidence as a detective, the biggest of them arising in the form of the murdered man's widow, "The Woman in Black" of the American title of this novel.   I can't really say any more without giving away the show here, but as it turns out, it's probably a good thing that he didn't have his findings published in his newspaper.

There is no question as to the importance of this book in mystery/detective fiction history.   Curran refers to Trent's Last Case in  his introduction as  "one of the most famous milestones in the genre,"  "one of the earliest defining detective novels of the twentieth century"  and a book that "heralded, in fact, detective fiction's Golden Age," a statement with which any number of later detective fiction writers, critics, scholars, and readers concur.   I also can't help but think that  the switch to a more human sort of detective must have been a welcome change to contemporary readers.   Now that I've read this book after finishing a huge number of detective stories where the central character is a serious, Holmesian sort of figure where reasoning or science rules the entire story, I found that I quite enjoyed Trent's "fallible human" personality.  As Bentley wrote, quoted here at House of Stratus:


"I am not sure why Sherlock Holmes and his earlier imitators could never be at all amusing or light-hearted; but it may have been because they felt they had a mission, and had to sustain a position of superiority to the ordinary run of mankind."

Not so with Philip Trent: we watch him sort of crumble a bit while falling in love, lose his confidence more than once, experience doubt and anxiety, and eventually acknowledge his own "high-blown pride" and "the impotence of human reason." Frankly, I find his character quite a breath of fresh air at this stage of the mystery/detective fiction game.

The twisty plot, however, is the true centerpiece of this book, and as I said to someone recently, I've read so much crime fiction that I feel sometimes like I know every plot possible.  However, Trent's Last Case came with a totally unexpected ending that made me say a not-so-quiet "bravo" in appreciation for a job well done.

I can recommend this book with no qualms at all -- just please bear in mind when it was written (just coming out of the Edwardian era) when it comes to some rather objectionable content.  It is still a worthy read, even for the most modern mystery and crime fiction lovers.

And one more thing:  I LOVE these Harper hardcover reprints!!