*The Blotting Book, by E.F. Benson 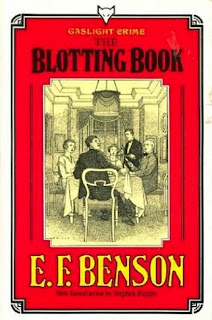 It generally takes me a couple of weeks to recover from October's dark-read fest, but I'm back again, with a novel from 1908, The Blotting Book by E.F. Benson.   I had planned to read this book quite some time ago but, as often happens here at casa mia, it arrived, I shelved it, and promptly lost it.  I found it again mid-October while going through my horror/supernatural books  (which live in a different room from British crime)  and had to laugh at myself --  I'm a huge fan of the author's ghost stories, so evidently my mind said "E.F. Benson. Upstairs" and I shelved it next to the other books I have written by him. I would guess that most readers of British fiction are familiar with E.F. Benson as the author of Mapp and Lucia; anyone who is a serious reader of ghost stories would also know the name.  The fact that he wrote a mystery novel or two was news to me; I had no absolutely no idea until I read Martin Edwards' The Story of Classic Crime in 100 Books.  There he was, with The Blotting Book sitting between  Horniman's Israel Rank and Chesterton's The Innocence of Father Brown.  [As a completely unrelated sidebar, I'll be following Edwards' book as a guide for mystery/crime reading all of next year, title by title; I've read quite a few of these so it probably won't be all 100.]    This edition is part of Hogarth's Gaslight Crime series; I have quite of few of these little gems sitting in my British reading room, including another one by this author called The Luck of the Vails.   It's also available online at Project Gutenberg, and there are a few versions available for Kindle.

Benson opens this story at a house in Sussex Square, Brighton, the home of a Mrs. Assheton.  She had lived there all alone until her son Morris came home from Cambridge.  It is a well-ordered, upper-class home in which everything is done to perfection.  For guests, it stands as "an example of perfect comfort," run precisely as it was before her husband's death some twenty years earlier.   Twenty-one year old Morris is Mrs. Assheton's only heir, and by the terms of his father's will,  Morris will gain his majority and thereby come into "complete control and possession" of  his fortune if he waits until he is twenty-two to marry with Mrs. Assheton's consent; failing that, he will regain  minor status until he is twenty-five. The thirty-thousand pounds that his father had left him is under the trusteeship of the family attorneys Taynton and Mills, who, as Mr. Taynton assures Morris one evening at a small gathering, have carefully invested on his behalf, so that ten thousand more pounds have been added to his portion of the inheritance.  Since the money would fall under Morris' control should Morris marry, Taynton invites Morris to take a look at the books pertaining to his account in their "stewardship," an offer that Morris declines.  As to the question of marriage, Morris most definitely has someone in mind, the other guest at the house that evening, a Miss Madge Templeton.   What Morris doesn't know, though, is that someone has gone to Madge's father and filled his head with some pretty ugly things to the point where Madge has suddenly been forbidden to see Morris in their usual way.    For reasons I won't reveal, Morris probably should have taken an interest in his accounts; he should have also listened to Taynton when he said that "we lawyers and solicitors are always supposed to be sharks..." since what is revealed that very same night at a meeting of the two attorneys reveals some very sharklike behavior, and also acts as a catalyst for everything that's going to follow, none the least of which is murder.

As Edwards notes in his book, this is a slowly-unfolding story, one that reflects "the unhurried nature of life among the well-to-do in Edwardian Britain."  (21)  It is also a novel that limits the number of possible suspects to the point where as it gets closer to the end, it becomes rather easy to guess the "who" since basically we start running out of people who could possibly be guilty.  Before that, however, Benson drops every sort of imaginable clue as well as a dream sequence that had the armchair detective in me second guessing myself for a while.    Interestingly, unlike many of the books published at the time, there is no detective figure -- the investigation as such was handled by a Superintendent Figgis, who makes an appearance here and there, and is described by Benson as


"in manner, slow, stout, and bored, and looked in every way utterly unfitted to find clues to the least mysterious occurrences, unearth crime or run down the criminal"

and "an incompetent agent of justice."

While it may not be the most exciting mystery of its day, I stayed engrossed throughout wondering how things would turn out, largely due to Benson's writing because he delves into the inner workings of the main characters, especially that of the criminal.  In this sense, Benson's done a top-notch job despite the fact that the mystery is just too easy to figure out, especially for seasoned crime readers.   I can see that many modern readers could easily grow bored with this book, but anyone into vintage crime and mysteries really at least ought to give it a try.  And now that I've moved it downstairs where it belongs, it is a very welcome addition to my library of British mystery fiction.