something new: A Knife in the Fog, by Bradley Harper 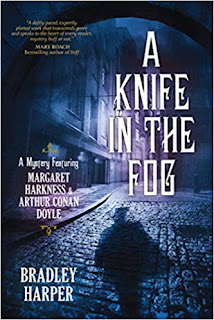 Seriously, I am so behind in reading and posting that it's just beyond frustrating.  I calculate that it's about a 4-week lag, so this week I'm hoping to make up for some lost time, starting with this book, A Knife in the Fog, which as you can see by the cover, is "a mystery featuring Margaret Harkness & Arthur Conan Doyle."  What this image doesn't show  is that there's another guest star to add the cast, and that's none other than Doyle's own mentor, Dr. Joseph Bell.  The true star of this show though is the one, the only, Jack the Ripper.

In September of 1888, Doyle is surprised to receive a letter from former prime minister William Gladstone, asking him to travel to London for a task he will only explain to him in person, offering him a substantial amount of money to do so, no strings attached.  On Doyle's arrival, he is met at Gladstone's club by a Mr. Jonathan Wilkins, Gladstone's personal secretary who explains that it's about "the Whitechapel homicides."  It seems that Gladstone, who had "always been charitable to the community of fallen women in Whitechapel, had been asked by a "delegation of these ladies" to help end "this reign of terror."  Surely Mr. Doyle, whose "scientific methods of analysis to to deduce the murderer"  took shape in his Sherlock Holmes, would be willing to examine the work of the police, in order to "propose avenues of investigation they have overlooked."  Even with a substantial amount of money as payment, and the opportunity to test his theories as to the importance of science in police work, Doyle is hesitant, referring Wilkins instead to Dr. Joseph Bell. Wilkins sweetens the offer and counters with the suggestion that the two work together.   Doyle, thinking Bell won't go for it, sends a telegram and to his surprise, Bell telegraphs back that he is "intrigued," and that he would come to London the following Monday.  In the meantime, Wilkins gives Doyle the address of the woman who will be his guide through the Whitechapel area, writer Margaret Harkness.   When  Bell arrives, the pace picks up as the three not only become involved with the police  side of things, but eventually find themselves in danger as well.

While in general I like my fictional characters to remain completely fictional (unless it's historical fiction based around certain true events, as in the novel I recently finished speculating on the fate of the 1845 Franklin expedition),  I quite enjoyed the addition of Margaret Harkness to this story.  In real life, as she is portrayed in the book, she was a journalist, a writer (albeit under a male pseudonym), and a political activist.  The author introduces us to her in men's clothing, armed with a Derringer which she knows how to use.  She is also portrayed as a very strong woman with no obvious vulnerabilities except in the cases of other women she cares about, and she refuses to put up with general male BS that gets thrown her way.    Putting her in the story gave a nice lift  to the usual scenario of a fictional Arthur Conan Doyle as detective (which, let's be honest here,  has been done just too many times), or as in David Pirie's series of books that featured  Conan Doyle and Bell together weaving their logical magic and solving crimes.

Despite its focus on the Ripper murders, A Knife in the Fog, which is the author's first novel,  is not too dark of a read, so it's probably suitable for people who are looking for something beyond the cozy zone but not too close to edge of the darker spectrum.  It's suspenseful and twisty,  and overall, it's fun and a great way to spend a few hours in total relax mode.    Along with the addition of Harkness I found the mystery engaging once it reached the point where Doyle & Bell found themselves in some jeopardy.  The author also gets really quite clever at times, none more so than towards the end where he pulls off an amazing sleight of hand I wasn't quite expecting.   I was also quite impressed with the author's knowledge of the slums of Whitechapel of the time.   At the same time (and it's probably a me thing), I'm not a huge fan of the many deductive-reasoning scenes going on between Doyle and Bell where they are bedazzling each other with their Holmes-like conclusions about people or events  -- in this case, less would be have been more.  And with apologies to Mary Roach, who back-blurbed this novel saying that it had an "utterly unexpected reveal,"  I guessed the who (but not the why) long before that time. I also think there are a number of scenes that could have been left out which would have made this a much more tight narrative  (involving Margaret's roommate) with absolutely no detriment to the story.

However, let me say that I read a LOT of first attempts at novels and I knew that this one was different from the moment I opened it.  The man can write and write well, something I genuinely appreciate these days when, thanks to  e-publishing, everyone can be an author, including some people who really shouldn't.  Truth be told, I much prefer a book where the writing is good with a few niggling mistakes than one with an okay plot and bad writing.   Despite my own little "me things" and nags about this novel about some rookie errors made here and there, it was absolutely refreshing and even pleasurable to read this book.