and now, back with my old friends from Italy once again: The Pyramid of Mud, by Andrea Camilleri 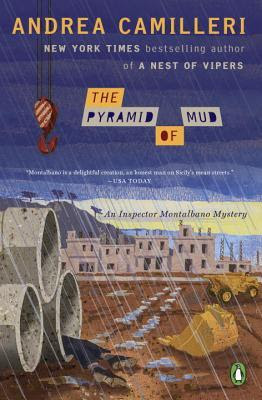 Well, here we are at book 22 in this series, and I'm still in love with Inspector Montalbano and have no intention of ever falling out of love with him.  I'm looking at the Camilleri page at Stop You're Killing Me  and there seem to be only two more novels coming our way.  Oh, what a sad day turning the last page of the last book will be, but I'll enjoy them while I can.

I actually read this book back in October so I had to give it a quick reread before posting.  Montalbano's seen plenty of corpses in his career, but this particular dead man found in a tunnel at a construction site doesn't sit well with the inspector.  The barefoot  man was wearing only a pair of underpants and an undershirt, and had been shot in the back. Evidently, he had gone outside like this earlier that morning, and to top matters, he had come to the construction area on a bicycle.  But here's the thing: how could he have ridden the bike uphill, mortally wounded,  in the middle of a storm where it was "raining like there was no tomorrow?"   The inspector begins with the assumption that the man was fleeing from someone, but who? And what did it mean that he went into the tunnel? Was there some kind of message there?   He quickly gets an ID on the dead man and makes his way to the house, where another surprise awaits which launches Montalbano headlong into an investigation that, as the back-cover blurb says, takes him into a world "just as slimy and impenetrable as mud."

Without going into too many details here, The Pyramid of Mud is another good one from Camilleri; at the same time it's a bit darker in tone than many of the other books in this series.  It ventures into the realm of corruption, and while that's nothing new in a Montalbano novel, we find Salvo despairing, comparing the crime scene and mingling of blood with mud with the state of things in Italy:


"...the mud had entered the blood, become an integral part of it. The mud of corruption, of payoffs, of phony reimbursements, of tax evasion, cams, faked balance sheets, secret slush funds, tax havens, bunga bunga... it was all a symbol of the situation in which the whole country found itself at that moment."

What makes this book a bit darker in my opinion is that while he's having to cope with solving this crime, which, as in other Montalbano stories is just the tip of the iceberg,  he realizes that his mind is just not on his work.   It is, as he says,


"as though the real Montalbano had gone away and delegated matters to a rough copy of himself, a stand-in devoid of hunches and ideas, unable to make connections and draw conclusions, lacking energy, passion, vitality ..."

proceeding through the investigation  "with the same enthusiasm with which he normally signed memos in his office."  It all relates to Livia, who is having a very difficult time coping with life after events from a previous book.  It's not our usual Salvo here, and as a long-time fangirl of this character, it's really quite difficult to be caught up in his pain.  Gah -- even now I'm starting to choke up just thinking about it.


LOL -- I don't usually get this involved with characters who live in crime novels, but these people are like friends whose lives entered mine some years ago and have never left.   Quite frankly, as I've said before, the people in these books are what keeps me buying and reading them, well, that plus Camilleri's savvy examination of the ongoing problems faced by his country, as well as the humor in pretty much every story and okay, the ideas I get from the food.

As I say each time, do NOT start late in the series.  Not only am I pretty much OCD when it comes to reading series novels in order, but with these books, readers who start at random will miss what came before, and each book builds on the others.  I love Inspector Montalbano and the people who surround him, and I seriously doubt that there's ever been a mystery series that has given me as much joy as this one.   And yes, book #23 was pre-ordered long ago.