a thriller with serious bite: The Monsoon Ghost Image, by Tom Vater 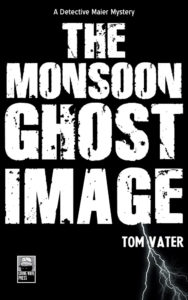 I would like to thank Henry at Crime Wave Press for my copy of this book.    I didn't use it, because silly me, I failed to see the pdf file he'd included in the email he sent, so I bought a kindle version  But thanks all the same.

Aside from having a cool logo, Crime Wave Press

"publishes a range of crime fiction -- from whodunits to Noir and Hardboiled, from historical mysteries to espionage thrillers, from literary crime to pulp fiction, from highly commercial page turners to marginal texts exploring the world's dark underbelly."

My first experience with this small indie press was, coincidentally, a book by the author of the book featured in today's post, Tom Vater.  The title was The Devil's Road to Kathmandu,  and it was a hell of a story that I remember not wanting to put down, so naturally I said yes when asked if I'd consider reading another one by the same writer.   This time around the action takes place in Thailand, and The Monsoon Ghost Image is the end of a trio of books featuring Detective Maier after The Cambodian Book of the Dead and The Man With the Golden Mind.

Former war correspondent, after years in the field and the death of a friend from Cambodia, Maier no longer wants nothing at all to do with war.  He now (2002) works  in "Hamburg's most prestigious detective agency,"and as the story begins, his boss Sundermann hands him a strange case.  It seems that he has had a call from an Emilie Ritter, a woman whose famous photo journalist husband Martin Ritter is missing, presumed dead, with a funeral scheduled for the following Tuesday in Berlin.  Maier knows this already, but he gets a gut punch when Sundermann reveals that Ritter was seen in Bangkok just a couple of days earlier.  Emilie shows Maier and his partner Mikhail an email from someone with the enigmatic name of the "Wicked Witch of the East" confirming that Ritter is not only still alive, but is also "involved in the crime of the century."  Emilie needs to know whether Ritter is dead or alive, so Maier and Mikhail are off to Thailand to try and track him down.  They're there a month with no sign either way, the calm before the storm after which all hell breaks loose, centering around "the world's most wanted photograph, the 21st century's Zapruder document."

As with most thriller novels, while reading The Monsoon Ghost Image  on one level I'd advise a complete suspension of disbelief, as the story explodes into seriously crazy, over-the-top territory.  Our detective friends find themselves caught up in some of the most bizarre situations imaginable (and I'm not joking here).  The story outdarks dark  -- there are at least two psychopaths whose actions will likely keep readers on the edges of their chairs, and knowing who to trust becomes downright impossible through the many twists and turns taken by this story.   Having said that, let me also say that underneath this craziness runs an undeniable grain of truth -- in the war on terror, there are certain agencies that will go to any lengths to get results, all "authorized at the highest levels of the world's most open and egalitarian society."  In the process, sometimes the line between good guys and bad guys becomes unrecognizable, and things get worse as they attempt a cover up in an effort to ensure that  their dirty secrets will never be revealed. And then, of course, there are others who just want to exploit those secrets for their own gain -- in short, as someone notes in this book,  "it's about money."

I am not normally a reader of thrillers, and while this one is, as I said, way over the top, I actually got caught up in it because I had to know what happened next.  Each time I thought things couldn't get any worse, they did, and it was a hair-raising ride to the finish.  It is not at all for the squeamish (I found myself reading quickly through some of the many gruesome scenes, the equivalent of covering my eyes while watching the same on television), and it is not for people who freak out over the use of profanity or violence.  In the end though, what made this book work well for me was a) the focus on that underlying grain of truth mentioned above combined with the author's out-there imagination  in telling that story (!)   and b) the author's depiction of Maier as a man who through it all tries to retain his humanity while others lose theirs by the wayside.  Throw in the exotic locations throughout Thailand and well, it becomes the stuff of a tv miniseries I would definitely watch.

I'd read anything written by Tom Vater -- his mind works in strange and mysterious ways, a quality I genuinely appreciate in the crime fiction universe.