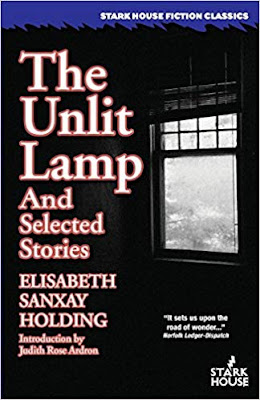 While The Unlit Lamp and Selected Stories is not at all connected with crime, I'm posting about it here because Elisabeth Sanxay Holding is one of my favorite mystery writers of yesteryear and people who know her work in that genre might just be interested in seeing another side of the author.   This book includes not only her novel, The Unlit Lamp (1922),  but also six other stories originally published in Munsey's from 1921 to 1923.  It's a wonderful collection of tales, and my thanks go to Stark House for sending me a copy and along with that, apologies for taking forever to post about it.

The Unlit Lamp is only one of twenty-five novels this author wrote over her lifetime; the last one, Widow's Mite (1953, which I can highly recommend), was published only two years before her death.  My guess would be that her most popular novel was her The Blank Wall (1947) followed by her earlier The Innocent Mrs. Duff  (1946), both of which are outstanding. At the same time, that leaves twenty-three more novels and a large number of short stories by this author to rediscover and to celebrate.   And while The Unlit Lamp doesn't fall into the crime/mystery category, it's still very much worth reading.  As the blurb says, it is an


"emotionally charged social drama from 1922, filled with the issues that burned so bright during the Roaring 20s as changing morals began to break down the tradition family structures of the past."

She does in this book what she does so well in her others, as Sarah Weinman notes in the introduction to Sanxay Holding's "The Stranger in the Car" in her Troubled Daughters, Twisted Wives: Stories from the Trailblazers of Domestic Suspense, painting


"psychologically nuanced portraits of women making sense of troubled marriages, conflicted relationships with children, or intrigue thrown up by the larger world." (195)

That, in a nutshell, could be the overall description of  The Unlit Lamp, which is one of the author's romantic novels.  It is the story of Claudine, who really wants to marry Gilbert Vincelle, and eventually does so even though her mother tells her that he will never make her happy and vice versa.  Gilbert has quite a high opinion of himself, and bases much of his worldview around that of mother's, with whom he still lives at home. As it turns out Claudine's mother was spot on in her judgment, as Gilbert takes Claudine to his mother's house immediately after their honeymoon.  It isn't at all the life Claudine imagines as a married woman, as her life becomes constricted by the expectations of her mother-in-law as to what a wife should be, as well as her husband's refusal to take her side.    By the end of three months she's ready to chuck it all but is advised not to when a family member considers (but leaves unspoken) the pariah she would become in society.  Everything that Claudine is becomes submerged, and she finds herself taking refuge in her children, in whom later she sees the cycle beginning to repeat.

There are six "selected stories," many of which run on the same themes expressed in The Unlit Lamp: "Hanging's Too Good for Him," "A Hesitating Cinderella," "Like a Leopard," "The Aforementioned Infant," "Old Dog Tray," and "The Married Man."  The last two of these were my favorites in this group, with  "The Married Man" coming out on top of them all.  It is an excellent satire on a man's viewpoint of marriage, in which the husband decides that he can't "live any more" unless he has his freedom.  There's no one else, he  doesn't want a divorce, he doesn't want to lose his wife; he just wants to be free from marriage's "petty restrictions and obligations."  The fun begins when his wife decides to go visit her mother, sans children.   It was seriously hard not to laugh while reading this story, and I can't help but think that in many cases, this one is as just as relevant now as it was when it was written in the 1920s. Absolutely delightful.

In Sanxay Holding's crime novels, she builds her stories around the psychological; the same is true here in both The Unlit Lamp and the shorter tales, which makes this a must read for fans of this author.  Even though this book is not part of the crime/mystery genre, many of the ideas that will come out in Sanxay Holding's later novels are very much present here.  And don't miss the lovely, poignant, and insightful introduction to this book by Judith Rose Ardron, the author's granddaughter.

I just want to say that Elisabeth Sanxay Holding should hold a very special place in the history of women authors of crime, and that it is such a pity that she is not more widely read.  And once again, as I find myself doing every time I read one of her novels, I can honestly say that  I loved this book.
Posted by NancyO at 9:58 AM