The House on Vesper Sands, by Paraic O'Donnell 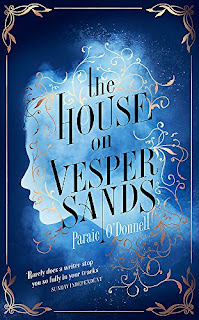 With one of the best opening scenes I've come across in my reading lately, I knew that this book and I were going to get along just fine.  The House on Vesper Sands is  a good mix of historical crime fiction and Victorian sensation fiction with more than a slight supernatural edge -- in short, it hit all of my relax-time, escape reading buttons. I read like I do everything else, wholeheartedly, giving the book in front of me my undivided attention, but sometimes I just need a brain break, and this one fit the bill completely.  Unfortunately, US readers will have to do what I did and order it from elsewhere (in my case Book Depository), since it doesn't seem to be available here except through sellers in the UK or Ireland.

Set in England of the 1890s, the novel begins one snowy night as Esther Tull arrives at a house in Half-Moon street, where she is employed by Lord Strythe as a seamstress.  The first clue we have that this is no ordinary job is that she is locked in to the room where she sews, with the butler, Carew, stationed outside in the hallway reading The Illustrated London News. The second clue that something is not right is the fact that once inside, she proceeds carefully and most quietly to break into a strongbox and remove three crystal bottles that she puts inside a satchel before dropping them off a window ledge onto the ground below. It is all part of a "promise" she'd made and she "meant to keep it."  Finally, as the book blurb reveals, she climbs onto the ledge, and jumps.   When the police arrive to investigate, they find a strange message "embroidered on her body" (not a spoiler - it's on the dustjacket blurb).

A case of mistaken identity puts young Gideon Bliss on the case along with Inspector Cutter of the Metropolitan Police, and together they work to solve not only this case, but the case of a missing young woman as well. At the same time, society columnist Octavia Hillingdon is looking for a good story outside of the social world, and the two threads link up as she hears an incredible story about a still-open case involving the death of yet another young woman.  In the meantime the newspapers are captivating readers with their headlines about "the Spiriters," who have once again cast "a pall of fear over Whitechapel and surrounding districts."

That's more than enough about plot; to say more would just be a shame, since I think it's probably fair to say that this book revolves around plot much more than it does its characters.  Once I started reading I realized that some of these characters seemed familiar, albeit from other books I've read, but at the same time, there's something different going on here with these people.  There's great interplay between Inspector Cutter and Gideon Bliss, for example,  that provides a lot of humor that sort of balances out the more disturbing aspects of the novel.  And while the supernatural edge of this mystery might bother some people, one of the main ideas so nicely presented in this book is that "men don't need magic to do evil," as Mr. O'Donnell clearly shows, which also provides a more serious side to the story.

The House on Vesper Sands is pure entertainment, and one that its author must have had a great deal of fun writing.  Every now and then reading for fun is a great thing, and I'm happy to have spent time with this story.  Recommended for lighter mystery readers who don't mind a bit o' the strange in their stories.  Now I think I have to go pick up his Maker of Swans to see what I've missed.  Relax, have fun, and enjoy the ride.