an Annie Haynes double feature: The Bungalow Mystery and The Abbey Court Murder

If you are asking yourself the question "who the hell is Annie Haynes," you're probably not alone. I had never even heard of this author prior to this year, when somehow I landed at the crime and mystery section of the website of Dean Street Press while looking up lesser-known women writers of the Golden Age period.  Oh lordy -- no one can imagine how excited I was to find not one, but several women whom I'd never heard of before.  Several clicks later and my library now has quite a few Dean Street Press paperback novels with more to be picked up in the future.  But as usual, I digress.

In 1923 author Annie Haynes made her debut with The Bungalow Mystery; by 1929 after twelve novels  (one published posthumously and the last one completed by an unknown author and published in 1930), she died of heart failure, which as Lizzie Hayes wrote at her blog Promoting Crime Fiction, was quite possibly connected to the rheumatoid arthritis she had long suffered, a disease which ultimately caused her severe pain and left her crippled.  Three of her books featured Inspector Furnival, four more starred a certain Inspector Stoddart, and the remainder were written as nonseries mystery novels.   Hayes also notes that

"... in 1923 a major newspaper regarded Haynes as one of the two most significant British female crime writers, with only Christie to rival her.  Dorothy L. Sayers, whose first detective novel was also published in 1923, does not get a mention."

These particular editions of The Bungalow Mystery and The Abbey Court Murder are, according to the back-cover blurb, "the first printed in over 80 years,"  so that already gives them a thumbs up as far as I'm concerned; having read both of them back to back, they get another thumbs up for sheer entertainment value.

The Bungalow Mystery  begins  as Dr. Roger Lavington of Sutton Boldon,  already having a bad day, is summoned to the house next door, "The Bungalow."  When he arrives he finds the tenant, Maximilian von Rheinhart, who lives there in a "hermit-like preference for his own society," dead on the floor.  His pockets have been "rifled," so while the housekeeper believes it may have been suicide, Lavington is positive that the man has been murdered.  He sends her for the authorities, and in her absence, he is surprised to find a young girl hiding behind a curtain, who begs him for help and asks him to let her go.  As we're told, her "appeal had touched a soft place in his heart," so he takes pity on her and sends her over to his own house as he waits for the police.  It doesn't take the police too long until they realize that there is most definitely a woman in the case, based on clues left behind. 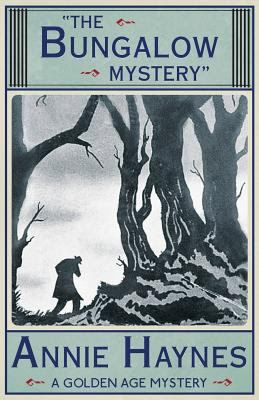 Back home again, Lavington hits on a safe way to get the woman away while the police are watching The Bungalow; she makes her escape but the good doctor is later stunned to hear that an unidentified  woman carrying "certain evidence" on her person related to Rheinhart has been killed in a horrific train accident that also made an invalid of one of his old friends, Sir James Courtenay.   The story picks up again two years later.  Lavington has moved away from Sutton Boldon to be nearer to Courtenay where he makes a startling discovery; in the meantime, the word is that the police have some new evidence in the Bungalow case.

In the introduction, Curtis Evans states that Haynes' novels


"retain, in stripped-down form, the emotionally heady air of the nineteenth-century triple-decker sensation novel, with genteel settings, shocking secrets, stormy passions and eternal love all at the fore..."

and that description is completely spot on.   At the same time, underneath the secrets, passions and eternal love, and I'll add good old male chivalry to the mix, The Bungalow Mystery  is at its heart an intricate, well-plotted mystery that does not get resolved until the finish when all is revealed.  I will also say that there are a few surprises along the way, and that skimming should be totally out of the question while reading this novel since even small details are relevant.   I won't say why, but after a second read,  I had a greater appreciation for Haynes' ability to  pull off quite a nice sleight of hand here, a sort of literary misdirection definitely deserving of major kudos. 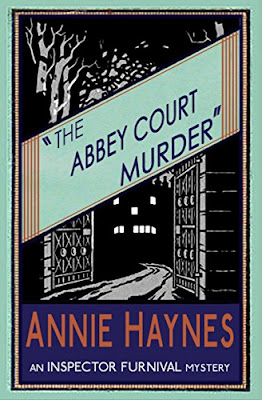 Speaking of sensation novel material,  The Abbey Court Murder was also published in 1923; it is the first of three novels to feature Inspector Furnival of Scotland Yard, and it's a definite page turner to the very end.

It begins at a wedding, as happily-married Lady Judith Carew and her husband Lord Anthony are leaving the church after the ceremony.  There, she gets a nasty surprise on recognizing someone she had thought long dead, and her entire world changes in that moment.  The man demands that she meet him later that night at 42 Abbey Court; there is no way she can refuse because the man has information about her past that her husband Lord Anthony does not know and that she does not want him to know.  The Carews are scheduled to attend a dinner that evening; she tells Anthony to go on as she fakes a headache to keep her at home.  As soon as her husband leaves, Judith grabs one of her husband's revolvers and  makes her way to the appointed rendezvous, but things go tragically wrong and someone is killed.   Judith finds her way home, but lives in abject fear that her presence at the murder scene will be discovered;  her doctor suggests rest and quiet, so the Carew family makes its way to the family home, Heron's Carew.    And that's when things really start popping.  Not only does Judith have to worry about being found out, but there is also a matter of  young Peggy Carew's new admirer, a certain Lord Chesterham whom nobody but Peggy thinks will make a suitable match (and with good reason ...); Judith also has suspicions about Anthony's cousin Lady Sybil Palmer who has recently become a widow and goes digging around to find out any dirt on Lady Carew, and of course, the appearance of Inspector Furnival, whose superiors at the Yard are putting pressure on him to make an arrest in the matter of the Abbey Court Murder.

I couldn't turn these pages fast enough. I am a huge, huge fan of sensation novels, and I can't get enough of this stuff!    I will say that I guessed the who here once a major clue was revealed but it's okay ... I was actually more interested in getting to Lady Carew's secret and waiting to see how the good inspector was going to finish off his case.

Both are fun vintage novels and I believe I'll have to go pick up the others here shortly.  If these two early books are indicative of her work, I'm in for a lot of serious entertainment.  While they won't be for everyone,  readers of these old mystery novels will enjoy them, as will anyone interested in the resurfacing of an obscure writer brought once again to the light.