The Astonishing Adventure of Jane Smith, by Patricia Wentworth 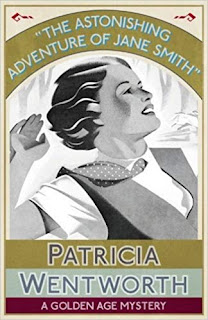 It's been eons since I've read a novel by Patricia Wentworth, and like most of her fans I spent many hours devouring her Miss Silver mysteries. The intro to that series, Grey Mask, was published in 1928, but Wentworth had already written and had published a number of mysteries beginning five years earlier.  The Astonishing Adventure of  Jane Smith is the first of these, but unlike the author's Miss Silver novels, the "impecunious and intrepid heroine" of this story is in her early twenties.

Young Renata Molloy has been a sleepwalker since her childhood, and as this story begins, she has inadvertently and unfortunately made her way into a meeting being held in her father's London flat. She is discovered just as one of the members of this insidious anarchist organization  happens to mention "Annihilation of the whole human race!" and of course, they want to know what she's heard.  In another part of the city, Jane Smith is sitting on a park bench counting out all the money she has left in the world, some two shillings and eleven pence, when she is approached by a young man, Arnold Todhunter,  who has mistaken her for the woman he loves, Renata Molloy. The resemblance between the two is uncanny, but it turns out that Jane and Renata are cousins; they are not at all close,  but their mothers were twins and as Jane puts it, "I have always understood that we were very much alike."  They are enough alike that Todhunter tells her of his discovery of Renata being held prisoner in her father's flat, and that according to Renata, she can't leave because her captors will only track her down, "find her and kill her."   Todhunter is to leave for Bolivia within three days and would like to take Renata with him, so he comes up with a most bizarre idea.  Would Jane consent to taking Renata's place in the flat (he can sneak her in via the fire escape) so that Renata would be safe from her "position of deadly peril?"   Jane, who has visions of "the workhouse" once her money runs out, agrees to the plan.  Luckily, she has the foresight to call on an old friend, Henry Luttrell of Scotland Yard CID, before the switch is made.  Also fortunate for Jane, she is no coward, not averse to taking risks,  and she has an amazing ability to think on her feet when necessary.  She will definitely have to call on those skills once she is moved from London to a house in the country, where her "astonishing adventure" truly begins.


The novel is a combination of mystery and spy story, with some romance added in on top of the action. There are secret passages to be explored, lots of government and villainous intrigue, secret formulas, and  strange people coming and going.  Meanwhile Jane as Renata is still in the precarious position as to whether or not her captors plan to eliminate her for what she may have overheard, but  she's not about to just let it happen without doing something.  No timid rabbit here.

I had absolutely no clue that this book was going to be as much fun as it was, truly what I'd call a rollicking adventure. As for the mystery (which for me came down to identifying a certain personage), well, as it turned out, I was patting myself on the back not too far into the story thinking "can it be any more obvious?" then feeling like a total dope when all was actually revealed.  Let's just say that I was right, but I was wrong all at the same time,  always a positive. Above all, it was great fun for a few hours, and I am eager to get hopping on all of the non-Miss Silver adventures I've missed.

Definitely recommended for those fans of Golden Age mystery fiction who are looking for something quite outside the norm.