Whose Body? by Dorothy Sayers 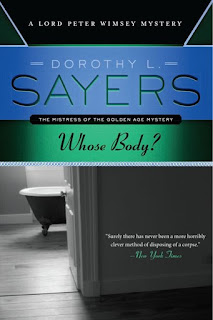 As much as I prefer the less unsung mystery/detective story/crime novels of the past, there comes that time when I just can't pass up the more well-known novels of this particular era, especially when the author's name is so familiar to nearly everyone, mystery reader or no.  And while I wouldn't call Whose Body the best in the series (that will come down the road a bit later), it is most certainly worth reading as it introduces one of the best-known characters of mystery's golden age, Lord Peter Wimsey.

Just a wee bit about Sayers' creation before moving into the novel itself.  In his work on Sayers,  James Brabazon,  author of Dorothy L. Sayers: A Biography (Charles Scribner and Sons, 1981) picks up a quotation of hers from  "How I Came to Invent the Character of Lord Peter," from Harcourt Brace News (Vol. I, July 15 1936: 1-2) where she reveals in a sort of tongue-in-cheek fashion that she had been "thinking about writing a detective story," when in walked Lord Peter:

Martin Edwards, writing in The Golden Age of Murder (Harper Collins, 2015), says that Sayers "reasoned" that


"A detective who was not a professional police officer ... needed to be rich ... and to have plenty of leisure time to devote to solving mysteries.  She conceived Wimsey as a caricature of the gifted amateur sleuth, and found it amusing to soak herself in the lifestyle of someone for whom money was no object..."


"endowed Wimsey with criminology, bibliophily, music and cricket as a favourite recreations. He is a Balliol man, equipped with a magnifying glass disguised as a monocle, a habit of literary quotation and an engaging, if often frivolous, demeanour." (19)

We also learn in Whose Body? that he  is also someone whose "young mind had been warped in its young growth by 'Raffles' and 'Sherlock Holmes'," and whose "career as a private detective"  was "hampered" by a public-school education. But there is much more to this "frivolous" man which doesn't crop up here until well into the story, when, as I remarked somewhere after finishing this novel, just as he's really getting on your nerves there comes that one moment when you suddenly realize just how very human Lord Peter Wimsey actually is.

A call from his mother, the Dowager Duchess of Denver,  alerts Lord Peter to a most unusual crime.  A dead man, wearing nothing but a pair of pince-nez, was discovered in the bathtub of the mild-mannered architect Thipps of Battersea.  Later, after having a look at the flat in Queen Caroline Mansions and incurring the wrath of Inspector Sugg,  Wimsey returns home and is called upon by his friend and Scotland Yard detective Charles Parker, who tells him a story of the disappearance of financier Sir Reuben Levy.   As it happens, Levy had gone missing on the day he was slated to attend "a most important financial meeting and do some deal involving millions."  Parker had taken his own look at the man in the bath, thinking it might be Sir Reuben; on discovering that indeed it was not, Parker remains puzzled at the man's disappearance.  He welcomes Lord Peter's interest in the case, and it is not too long before our hero comes to realize that perhaps the two just might be related.  First, though, he and his almost Jeeves-like valet Bunter must wade through what will turn out to be a mess of red herrings before the case(s) can come to a successful close.


Most unfortunately, once you reach a certain point, the identity of the criminal is way too easy to figure out, but I think you have to consider the fact that,  as Edwards notes, the author was generally "more interested in describing the culprit's methods of carrying out and concealing the crime."  In this sense, I was actually more interested in Lord Peter and Bunter to actually mind too much, and despite knowing ahead of time the who, the how, I felt, was rather ingenious.  And also under the heading of most unfortunately (and I would add uncomfortably), I'd forgotten exactly how demeaning Sayers' descriptions of  Jewish people were at the time.   Otherwise, I'm quite happy to have read it again, and as I have the entire series here, I'm sure Lord Peter and I will meet once again in the near future.