The Long Call, by Ann Cleeves 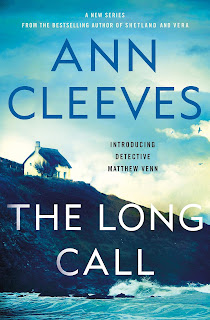 "We all need secrets, just to keep sane, to feel that the world doesn't own us."

Let me just say this:  I did not particularly care for the one book I've read by this author, Raven Black, and I never went on to read any of her other novels,  but for some weird reason when I first heard about The Long Call, I preordered it.  To this day I can't think why, but as it turns out, it was a good call.  I spent all of yesterday reading it, unable to put it down.


"... the cry of a herring gull, ... the long call, which always sounded to him like an inarticulate howl of pain."


And indeed, the long call sounds throughout this novel, which takes place in a  small town in North Devon, centering on the murder of a man with an albatross tattooed on his neck. Given the nature of the tattoo, I immediately figured out that this must have been a person suffering under the weight of some heavy burdens, and as things begin to unfold, it turns out that I was right.   Investigating the crime is Detective Matthew Venn, who had once lived in the area and had broken from a particular religious group to which he and his family had belonged, estranging him from his parents.   Working with his colleagues Jen Rafferty and Ross May, he discovers that the victim is one Simon Walden, a man whose past had left him completely broken.  Walden had been living at the home of Caroline Preece, where he had rented a room along with Caroline's friend Gaby Henry; he had also been  involved as a volunteer at the Day Centre at the Woodyard, a sort of artistic safe place for people with learning and other disabilities, managed by Venn's husband Jonathan.  When a woman with Downs Syndrome goes missing from the Woodyard, Venn begins to surmise that the two cases are somehow connected, and that there is something just a bit off -- there  is "too much coincidence. Too many people circling round each other, without quite touching."   He also realizes that it is  quite possibly the Woodyard itself that is the connection,  putting him in the uncomfortable position of having to decide whether or not to withdraw himself from the case because of his personal ties. Before he can make that decision however, little by little the investigation begins to uncover hidden secrets from the past that just may have a direct bearing on the present.   To say any more would be to spoil, but the story revolves around unraveling those secrets to get to a solution.

And what a solution it is, a complete surprise (for the most part),  but it is the getting there that really matters.  The Long Call is refreshingly free of gratuitous violence or sex, affords the armchair detective  a solid mystery, and the author spends quite a lot of time on the main characters in terms of thoughts and backstories.   She also manages to weave in a number of social issues without being in your face about it, and above all, takes her time in allowing the story to unfold, allowing the questions and the suspense to accumulate  on the way to solving the mysteries in this novel.  As I looked through reader reviews after finishing it, I noticed a lot of people found it too slow (??)  but for me it was absolutely on point.  My only negative is that most of an entire chapter  could have been left out here (chapter 29, in which Caroline and her father do a bit of emotional sparring and then come to terms with each other)  that to me added nothing whatsoever to this story.

This book begins another series, evidently, given the blurb on the front that says "Introducing Detective Matthew Venn."  I was so impressed with The Long Call that I will be definitely be in line to buy Venn's next adventure.    I'm still not sure what prompted me to preorder this book (Twilight Zone music playing in my head here), but I'm happy I did.

A bit dark for cozy readers, and not quite as edgy a story that might be enjoyed by noir fans, I can recommend it for those who enjoy a good mystery without the clutter that is all too often included in a lot of modern crime fiction these days.