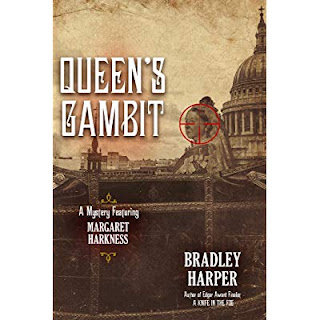 I'm reading more modern crime novels than I'd planned for this year, but in this case (and in another coming up shortly), it's all good. As with books from other genres I read,  I am all about supporting smaller indie presses whose work may go unnoticed in favor of the bigger guys  -- in this case it's Seventh Street Press, and I have another one of their books propped up on my bookstand waiting to be read.

Some time ago I read this author's A Knife in the Fog, and now he's back with book two in this historical crime series with Queen's Gambit.  In the meantime, Knife in the Fog was nominated as a finalist for the 2019 Edgar Award for best first novel.

It's no secret (and I did say this when I posted about the author's earlier book) that I'm not in love with the idea of remaking historical figures into fictional ones, but I will say that in my case, at least Margaret Harkness is not so prominent a personage  that I can't live with her taking center stage in this novel.   Nine years have gone by since the case that introduced her in Knife in the Fog; during that time she's become a published author with books that are read widely.  It is in fact one woman's changed perception of Harkness that helps kick off this story.

In 1881, more than fifteen years prior to the time in which the bulk of the action takes place here, a young man found himself having to flee Imperial Russia after his mother was imprisoned for her role as a member of the group responsible for the assassination of Czar Alexander II.   Having been sent to Berlin to hide, young Viktor Zhelyabov became Herman Ott, married, and had a son.  He is living with his wife's family when he is offered electrical work that he can't refuse because the pay would be "a substantial increase" in his regular salary, needed for his "growing family."

One month later, it seems that the "nest of traitors" that the German government has been trying to root out has somehow gotten wind about every plan made by  the Security Services, and government officials have no idea how this is happening.   An investigation is required, and it must be "someone from outside."   One official has just the right suggestion, to bring in Professor Joseph Bell, since he has helped the police in his own country a number of times.  Bell brings in Margaret Harkness because of her German language ability and because of their prior experiences together, and she is more than willing -- due to health reasons, she is planning to go to Australia for health reasons, and the fee and the bonus she would receive would allow her to pay for her passage.   The solution of the case will have a huge impact on both Ott and Margaret Harkness,  one that will play out on the streets of London.


Despite the subtitle that labels this "a mystery," it seems to read much more along the lines of a thriller, as time is ticking down here until the main event, the planned assassination of (as it says on the cover blurb so it's not a spoiler) "none other than Queen Victoria herself."  [As an aside, the front cover with her majesty's face in crosshairs also sort of gives away the plot even before you get to the back cover, but moving on...]    In fact, the only real mystery is solved early on by Bell and Harkness (and I will add that I figured it out long before they did); afterwards we already know the who, so as it turns out he's not really the "mysterious assassin" of the back cover blurb.    Let me also say that this story is what I call "thriller lite" as the author adds in various threads including a potential romance and a young female detective wannabe who is taken under Margaret's wing.   It's more the fare for readers of lighter crime, and to be very honest, my own feeling is that there is a lot of superfluous stuff that from time to time detracts from the suspense level -- for example, an entire chapter about Margaret's history with tarot cards as well as  reunions with Conan Doyle and Mark Twain (who were both in the first novel).  Then there's  Margaret herself -- while she's a very independent woman and has figured out that dressing like a man gets her into places a woman can't go, she seems a wee bit softer with less of an edge than she had in Knife in the Fog; she also makes some pretty bad mistakes during the course of the story that seem somewhat out of character.   Believe it or not, the character's point of view I cared about the most was that of the bad guy; the clue is in understanding how the titular "Queen's Gambit" works on the chessboard, and the author has explained all of that in the book.

As I said in my post about Knife in the Fog, the author can definitely write, and I am very grateful to the powers that be at Seventh Street for my copy. While it was entertaining, and while I'll certainly be looking forward to book three,  I actually prefer  a more taut, edgy mystery, so I'm probably not the best or target audience for this book.   That is certainly not because of the author -- it's definitely a me thing.   At the same time,  that certainly doesn't mean that others aren't enjoying it, since reader ratings are for the most part consistently four and five stars both on Goodreads and Amazon.  I'd certainly recommend this novel to, as I said earlier, readers who like their crime on the lighter side and don't mind a few excursions elsewhere outside of the main plot thread.