back through the time tunnel again with a classic: The House of the Arrow, by A.E.W. Mason, 1924 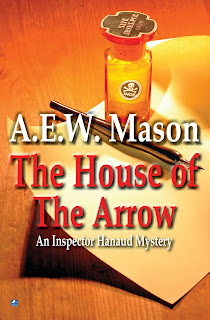 "Did I not tell you, Monsieur, that we are all the servants of Chance?"

Fourteen years prior to publishing The House of the Arrow, writer A.E.W. Mason had first introduced to the mystery/crime-reading world his somewhat eccentric detective Inspector  Hanaud of the Sûreté in his At the Villa Rose.  That one I just liked on an "okay" sort of level, mainly because of  Mason's proclivities toward what Martin Edwards refers to in his The Story of Classic Crime in 100 Books a "lop-sided story structure," in which all too soon the culprit is made known and readers sit patiently (or not, depending on your makeup) waiting for the rest of the story to play out.    House of the Arrow thankfully poses a bit more of a challenge for the reader, so at least for me there was not one iota of frustration here.  This one I quite enjoyed, spending an entire day entranced with it and then finishing off the experience by watching the 1953 film (more on that later) before going on to order the next Hanaud novel, The Prisoner in the Opal (1928).

just as an aside and an FYI,  while my copy is a hold-in-your-hands reprint edition, House of the Arrow is also available at Project Gutenberg if you lean toward the e-variety of reading:


Before this story moves on to Dijon, France, it begins in the London office of the firm of Messrs. Frobisher and Haslitt, solicitors,  on the east side of Russell Square.  Among the other letters in that day's batch of mail is one written in an unfamiliar, "spidery, uncontrolled hand" postmarked Dijon.  Haslitt has a client there, a Mrs. Harlowe, a widow whose health is not so great.  The letter is not from her however, but from someone by the name of Boris Waberski,  Mrs. Harlowe's brother-in-law, who has a "great necessity" of part of the "large share" of the fortune he is certain he will inherit upon her death.  The letter is ignored, and three weeks later, Mrs. Harlowe's death is announced in The Times. Haslitt knows he'll hear from Waberski again, and sure enough he does, except that this time the news comes that Waberski has levelled a charge of murder against Mrs. Harlowe's "husband's niece and adopted daughter" Betty Harlowe.  It seems that Waberski's expectations were all for naught, since Betty has inherited the entire estate, and now he claims that she poisoned the widow on the night of August 27th.  The news does not come from Waberski directly, but via a letter from a friend of young Betty, Ann Upcott.  Frobisher and Haslitt are further upset by a telegram coming from Betty herself, which informs the two attorneys that she needs help right away -- it seems that "The Prefect of Police has called in Hanaud, "  and that she believes "They must think me guilty."   Haslitt sends Jim Frobisher to Dijon to look into their client's situation, but before Frobisher leaves, Haslitt says something to him that quite succinctly and tantalizingly  summarizes the rest of the story:

"...remember, there's something at the back of this which we here don't know."

Truer words were never spoken, as Jim will come to discover as he makes his way to France and meets up with Inspector Hanaud, who accompanies him to Dijon to work on a case of some serious poisoned-pen letters in the area.

The House of the Arrow is by no means your average murder mystery. First, there is some question as whether or not a murder has even been committed; when that issue is settled, the question of who may be guilty takes on a life of its own.  While Frobisher is somewhat in awe of Hanaud, his own feelings about the matter and his own particular personal interests often pit him against the Inspector, even as they work together to get to the truth and as Hanaud's discoveries lead to even bigger questions that need further answers.  In short,  Mason is not (thankfully) going to let his readers off the hook by making it easy this time as he did in At the Villa Rose.  I will say that after finishing this novel I read a couple of posts about this book in which a few people had figured it out, but for  me the solution was a surprise; even better than finding out the who  though was the path to the why and especially the how.   Pardon me for rambling here for a moment,  but I was just talking to someone  the other day about how old school I am with mystery stories, preferring the journey much more than the solution itself;  House of the Arrow affords that very pleasure.

I couldn't have said it better.   Count me as "a true fan," who thrives on the "delightfully outlandish."

The film, on the other hand, was a bit of a puzzler.  The way the film is shot gives it a noirish vibe,  but having read the novel, it lacks the elements that make the book both mysterious and suspenseful.  I get creative license and all that it encompasses, and I did enjoy the film for what it was, but I was left with the feeling that there could have been much more to it than what I saw.  I will say though that I immediately checked to see if Oscar Homolka had reprised his role as M. Hanaud; like Bruno Cremer is for me the Maigret, Homolka is the perfect Hanaud, capturing Mason's character's eccentricities so well.  I can only imagine he'd read the novel beforehand to do it so well.

This book runs rings around its predecessor and I recommend it to readers of Golden Age detective fiction, for readers who like puzzle-style mysteries in general, and to people like myself who enjoy a good yarn that is cleverly constructed, one that takes a number of twists and turns along the way.     Remember, though, it is a product of the early 1920s, so perhaps it may be a bit verbose for modern readers getting to it for the first time.  Then there's Hanaud himself -- he can be both annoying twit and genius crime solver at the same time, so it takes a patient reader at times to get over his personality.  It is, however,  perfect for someone like me who, as noted earlier, enjoys the path much more than the end of the journey.