and thus we come to the end: White Jazz, by James Ellroy 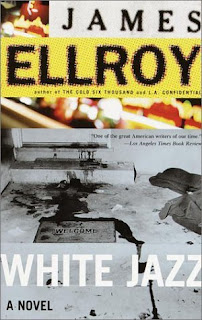 White Jazz closes out Ellroy's LA Quartet, and in doing so, takes us into the life of  Dave Klein, Ad Vice lieutenant in the LAPD.   Unlike The Black Dahlia, The Big Nowhere and LA Confidential, Ellroy's writing style is dialed up full throttle, set at pure, raw energy here as he moves his reader into Klein's head

"his voice clipped, sharp, often as brutal as the events he's describing -- taking us with him on a journey through a world shaped by monstrous ambition, avarice, and pervision."

Klein is telling this story years after the events of White Jazz, looking backward with his beginning in the fall of 1958:

"Newsprint: link the dots. Names, events -- so brutal they beg to be connected. Years down -- the story stays dispersed. The names are dead or too guilty to tell."

"I killed innocent men. I betrayed sacred oaths. I reaped profit from horror. Fever -- that time burning. I want to go with the music -- spin fall with it."

Mind you, we haven't moved into the actual story yet and right away we have a preview of not only what's coming down the pike for Klein, who lived to tell the tale if one could actually call it living,    but of Ellroy's superb jazzed-up prose style as well.

Aside from his police job, Klein has ties to local bad guy Mickey Cohen, Howard Hughes and mobster Sam Giancana. He is paid well to work as hit man, strike breaker, or to kneecap someone if necessary. He's also a slumlord and a law-school grad.  After the death of a federal witness in Klein's custody,  the case that takes center stage in White Jazz, one which will eventually take everyone involved to places they couldn't possibly have foreseen as ""the City of Angels begins to seem like the City of the Devils," starts with a burglary and the murder of two Dobermans at the home of JC Kafesjian, "LAPD's sanctioned pusher," and the owner of a chain of dry-cleaning establishments.  He is protected by Dan Wilhite of Narco;  Klein is called in "to square things," as Kafesjian insists on no investigation.  Ed Exley, now Chief of Detectives, decides otherwise, and Klein is partnered with Sgt. George "Junior" Stemmons to take care of it.   Away from the job, he is hired by Howard Hughes to keep tabs on a young actress by the name of Glenda Bledsoe, "with an eye toward securing contract-violating information."  In the meantime, as if this all wasn't enough, the  Justice Department investigators are beginning a " 'minutely detailed, complex and far reaching' probe into racketeering in South-Central Los Angeles," part of which would involve rumors of the LAPD allowing vice to flourish and rarely investigating "homicides involving both Negro victims and perpetrators."  Eventually Klein will come to realize that he's been tagged as scapegoat by the powers that be who want to keep their secrets to themselves.  He also knows that he's being used as a pawn in a much bigger rivalry.   He's not going to take either of these lying down -- as the back cover says, for Klein, "it's dues time."

I really don't want to reveal  anything more about this book plotwise because at this juncture getting into the nitty-gritty of things would just kill it for anyone who hasn't read this book and may want to do so down the road.  There's also the fact that to try to enumerate the subplots found here would just be folly, and there's no way I can possibly describe the bleakness tied to the characters or the way in which things spiral out of control throughout the story.  I will say that while the books that came before this one were dark, this one is downright claustrophobic, a connected web of murder, revenge, sick and damaged souls, making the reader wonder if there is any possibility of justice at all in this hellish vision of LA.

It also ends the LA Quartet, picking up the speed toward the finish in a way that only Ellroy could make happen as he moved across twelve years from 1947 to 1959.  More accurately it ends what is often labeled as the Dudley Smith Trio that had its roots in The Big Nowhere and comes to a head in White Jazz; although   The Black Dahlia  has little to do with the characters of the three novels that follow, it is most certainly the foundation of Ellroy's vision and as such necessary to understand many of the themes that make their way through all four books.  Word to the wise: do not under any circumstances make White Jazz your starting point -- you will be lost.

I think there have only been two other series I've read that have come close to this one in terms of sheer darkness of vision and which out-noir noir,  Derek Raymond's Factory series and David Peace's Red Riding Quartet.   While Ellroy's Quartet novels are, as I've been saying all along, not easy to get through on a number of different levels,  reading these four novels has been an experience in itself and I wouldn't have missed it.  I'm genuinely sad that it's over.