two in one: Ruth Sawtell Wallis: Too Many Bones / Blood From a Stone 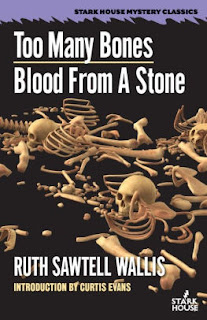 9781951473099
Stark House, 2020
268 pp
paperback -- my many, grateful thanks for my copy.
This book is literally hot off the press (well, minus a couple of weeks),  and it's truly a good one.  First, it's by a writer whose work I've never read; second, both mysteries included in this volume are never dull, keeping me guessing right up until the end; third, both stories have a strong, professional female character taking the lead.
Both of these lead characters take after their creator.  Curtis Evans has a short but remarkably thorough biography of author Ruth Sawtell Wallis (1895-1978) in his introduction to this book, which discusses not only her short mystery-writing career but her years as an anthropologist.  Before transferring to Columbia University to work with Franz Boas,   Ruth Sawtell Wallis had spent time excavating Azilian graves in the French Pyrenees.  Susan Kent in Blood From a Stone (1945) shares  the author's zeal for anthropology and excavation, eventually coming to claim discoveries in a particular cave site as her own, while Kay Ellis in Too Many Bones (1943) took a job in a museum where she was excited to be a part of a "study of human heredity"  involving the skeletons of four families in a remote, isolate area of the Carpathian mountains, previously excavated in 1900.
In Too Many Bones, Kay arrives in the very small midwestern town of Hinchdale to begin her work with the Holtzerman Collection and right away she is told that she probably "won't be stayin' here long."  First she's not sure that the Director of the Proutman Museum, Alpheus Harvey will let her do the job she came for; it seems that the museum staff were not expecting a woman to fill the job.  But that's the least of her problems.  As she begins her work, she meets the owner of the museum, Zaydee Proutman, who has designs on Kay's direct supervisor, Dr. John Gordon, and almost immediately the redhead starts to make trouble for her.   As Kay is informed later by librarian Alice Barton, Zaydee holds all the cards:

"...if we are judged incompetent at any time because of illness or other cause, we will be retired on pensions equal to our salaries. The Judge of our incompetence will be Zaydee ...All salaries are paid by her...She hires employees and dismisses them."

Sensing a rival and hoping to entice her to leave, not too long after Kay starts her job, Zaydee knocks fifty dollars off of Kay's salary because "A young woman ... does not have expenses commensurate with a those of a man."  Kay needs the money to put forward to future PhD studies, so she stays.  But it looks like the prediction that Kay wouldn't be staying in Hinchdale too long just might come true after Zaydee finds out that John Gordon and Kay had gone out for an evening, and that later that Kay had been seen with one of Zaydee's former boyfriends Randy Bill.  The ill-tempered, jealous redhead decides that Kay must go due to being "lazy and insulting."  Even worse, while Kay is packing up her trunk to go home, she finds out that Randy Bill has died in a car accident, that Zaydee is missing presumed dead, and that she is the local sheriff's number one suspect.  While he orders her not to leave town, Kay takes it upon herself to quietly investigate the small circle of people surrounding Zaydee, any one of which may have had their own motives to want her dead.  As she tries to find out who may have been responsible for Zaydee's death, she stumbles upon a horrifying discovery that causes her to fear for her own life.

Given that this book was published in 1943, it is somewhat refreshing to find concerns about male/female salary discrepancy here, as well as discrepancies in the treatment between male and females in the academic realm.  And while there is no denying that there are a few cringeworthy racial epithets in this novel, to her credit the author's portrayal of the two African-American characters in this book affords them strong, realistic personalities, giving them each something to contribute towards Kay's investigation.  I could have done without the budding romance, but that's just a me thing.  Otherwise, there's an ingenious as well as fun mystery here, with plenty of motives all around.  I had absolutely no clue as to the who up until the last minute, and the ending was beyond appropriate and ultimately quite satisfying.

Blood From a Stone takes us to the French Pyrenees and to 1935.  More precisely, we find ourselves in  Volvestre, the valley of St. Fiacre,  outside of the provincial capital of Foix.  There, in a house named La Catine, Susan Kent, an "American girl with red hair," has taken up residence with another woman, Neva (and no man), thus making it "the house of bad habits."  The other permanent resident of the place is a dachsund named Seppel.  As the novel begins, two "farm boys" come across Susan "kneeling by stream, holding a jagged strip of jawbone filled with squat, gleaming teeth," and mistake her for the legendary "White Woman" who "appears in many guises,"  a figure of the local supernatural lore.  Given the strange events to come,   this beginning turns out to be more than appropriate. The daughter of a widowed, wealthy manufacturer, Susan had come to France with a desire to do some excavating in a cave called the Violet Hole, where in 1881 a priest had "picked up some pottery on the surface," but aside from the few "lines about it" that he published, not much more was known.  Just after she is warned by one of the locals that "this work you are about to do is full of danger," a visit to yet another cave with four other people nearly ends in disaster, and things only get worse from there.  Soon enough Susan, "a foreigner, a girl who crawled through caves and played with bones, who might be a witch" finds herself at the top of the list of suspects when she discovers a more recent corpse while exploring the Violet Hole.

The author drenches this novel in atmosphere from the start, and cloaks her story in a dark air of distrust, betrayal and suspicion.  The characters connected to Susan are mysterious in their own right, each holding their cards close and letting out very little information about themselves, so that by the time the revelations came I was not only genuinely surprised but completely flabbergasted -- I never saw it coming.   But it's the getting there that counts in this book, which I couldn't put down once I'd started.

This two in one I can most heartily recommend for those who are more than just a little fond of vintage crime.   As always, the powers that be at Stark House have chosen the perfect person, Curt Evans, for introducing the book, and there is also a lovely, poignant Foreword by Nancy Wallis Ingling, Ruth's granddaughter.  I love love love finding women writers whose works I'd never read, and Ruth Sawtell Wallis is just one of many I've found via Stark House.  Now I feel this need to find her other novels; while she only wrote at total of five mysteries, Too Many Bones earned her "a $1000 prize and additional royalties in the semi-annual Red Badge new mystery story contest."  Her work is very different from that of many of the women writers I've read of the same period, most likely because she put much of her professional self into these books, and quite proudly, I'd say.