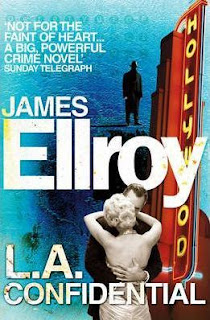 "It was a once-in-a-lifetime case and the price for clearing it was very, very high."

I'm one of those weirdos who actually preferred the novel to the film adaptation, and I think it's because it had been so long since I'd seen the movie that it I'd forgotten about it.   I recently watched the film again after finishing the novel and was a bit thrown off -- not only had the story been cut, which due to its complexity I'd expected, but parts of the plot were changed as well, even down to who was killed in the Nite Owl Coffee Shop.   James Ellroy himself said about the film that it was "about as deep as a tortilla."

Luckily that's not the case with the novel. There is nothing shallow about  LA Confidential, which goes straight for the jugular and doesn't let go.

As was the case in The Big Nowhere, three police officers are at the center of the story. Sgt. Jack Vincennes  has fifteen years on the force, yet he is not well respected by his superiors.  He was given a fitness rating of D+ by his own supervisor who also remarked that he is "barely adequate."  Jack has a side gig as technical advisor to a TV cop show (think Jack Webb and Dragnet) and also provides celebrity fodder for Sid Hughes' tabloid Hush-Hush, giving Sid the heads up when an arrest is about to be made allowing the magazine a leg up on press scoops. He also wants to leave Ad Vice and return to Narco before he retires,  and is told that if he can "make a major case," in a "Picture-book smut" investigation he'll get his wish.  Like many of Ellroy's tormented characters, Jack has a secret from his past which if uncovered would cost him everything.  Wendell "Bud" White has no use for men who beat women; as a boy he witnessed his mother's murder at the hands of his father.  Lieutenant Ed Exley, former war hero,  lives in the shadow of his father, a retired legendary cop now construction bigwig who is currently bringing a Disneyland-type park and a freeway to Los Angeles.  Exley "works poorly with partners and well by himself;" he is also regarded as a "coward" because he does not use violence against suspects.  Aside from his inner rivalry with his father, he too harbors a secret that he would prefer to keep hidden, and after he rats out the culprit in a jail beatdown by cops during a drunken Christmas Eve party, everyone hates him.

The main case at the novel's  heart is the shooting at the Nite Owl Coffee Shop, "The first all-Bureau call-in in history."  Six people died when at 3 a.m. three men entered and shot the place up. The police have one hot lead on the case: over the previous two weeks, three men had been seen "discharging shotguns" into the air at Griffith Park.  They had been seen driving a purple Mercury coupe at the time and it was a purple Mercury coupe that a witness had seen parked across from the coffee shop at the same time the massacre went down.  But since this is James Ellroy we're talking about there, this case will quickly unfurl well beyond its center and as it spins, it will drag the three cops along with it, catching up to them in ways no one could predict.   And that's an understatement.

LA Confidential has been criticized by readers for its rather labyrinthine complexity involving numerous subplots, but I didn't have an issue with it and frankly, could care less, since after having read its predecessors The Black Dahlia and The Big Nowhere, I've become used to Ellroy's penchant for grandiose, and I was caught up in each and every turn taken by this story.  What I really want to say is that it's a firecracker of a  read that sucked me so far down the rabbit hole of Ellroy's 1950s Los Angeles that is was a relief when I finally got out.   Again, not perfect, but pretty damn close.

It's another book that is uberbleak, not for the squeamish, should come with warning labels, and yes, it's long in the reading, but I enjoyed every second of it.  Every nanosecond of it.