The Beast Must Die, by Nicholas Blake 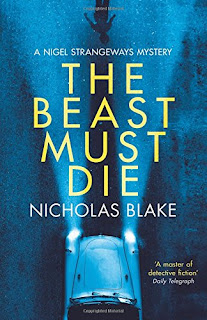 9781911295945
ipso books, 2017
originally published 1938
251 pp
paperback
While I'm very a much a mystery series purist, meaning I have to read them in order, over the rest of this year I'll be making a lot of exceptions, including this book which is number four in the series featuring Blake's private detective Nigel Strangeways.   There's a reason for this -- my crime/mystery shelves are overflowing with books I've picked up here and there over the decades that I've never read, so in trying to get through at least some of them, I needed some organizational help.  I found it by chance while reading through a book called Serial Crime Fiction: Dying for More (eds. Jean Anderson, Carolina Miranda and Barbara Pezzotti; Palgrave MacMillan 2015) when I came across Miranda's chapter entitled "More Than the Sum of its Parts: Borges, Bioy Casares and the Phenomenon of the Séptimo Circulo Collection" (31-40).     Fascinated, I went online to discover exactly which titles were included, landing here.  As I read through the list, I realized that I owned more than quite a few of these books, and thus the decision was made to read as many as I can  this year and very likely on into the next.  Problem solved.
Just a bit about the Séptimo Circulo Collection before moving on.  According to an article at the blog of the International Crime Fiction Research Group ,  this series of books was the creation of Jorge Luis Borges and Adolfo Bioy Casares which began in 1945.  The name derives from  the seventh circle of Hell, à la Dante's Divine Comedy,  the outer ring of which is reserved for various types of violent criminals.  You can read more about how this collection came about in an excellent article by Scott Adlerberg at Crimereads ,  but basically the idea is that prior to the publication of this series,  mystery/crime fiction in Argentina had been classified as "literatura de kiosco"  or newsstand literature, looked down on by as Carolina Miranda notes, " 'serious' Argentine writers,"  but that all changed in the hands of "a close circle of educated writers, translators and editors" including sisters Silvina and Victoria Ocampo, with Borges and Bioy Casares at "the core."   One main influence that would help turn what Scott Adlerberg  refers to as "amusing confections, at best" into a  "literary phenomenon worthy of the educated reader" as well as a "popular ... form of entertainment available to the less educated reader"  was Victoria Ocampo's influential literary magazine Sur, which served "as a platform promoting and validating the collection," publishing seven articles between 1940 and 1948  "specifically referring to Séptimo Circulo titles" (Miranda, 34).   There's much, much  more to this story, of course, but any of the links I've provided will fill in the gaps here, and there are a number of articles online in Spanish as well.
All right -- back to the book now, which is, if I may say so, a brilliant piece of writing, worthy of the mental round of applause I gave it upon finishing.   It is a solid whodunit -- I went through more than one round of  "it was him/her" and still did not get it right.   It's also a story about which I won't be saying very much, since any hint of what happens here would be a crime in itself.   The barebones outline is this: Frank Cairnes, a writer of crime novels under the name of Felix Lane, is out to get whoever it was that was responsible for the death of his young son in a hit-and-run accident.  As the novel opens, we are made privy to Felix Lane's diary entry of 20 June 1937, which begins as follows:

"I'm going to kill a man. I don't know his name, I don't know where he lives, I have no idea what he looks like. But I am going to find him and kill him ..."

Writing the first part of this book as Cairnes' diary is a move of sheer genius on the author's part, as there is no way anyone will put the book down at that point.  Aside from Cairnes' desire for revenge, and his plans to "kill a man," just some nine days later we discover that he has slowly pieced together the identity of the driver as well as the woman in the car at the time. It's no spoiler to reveal that Cairnes now has his sights set on George Rattery (it's right there on the back-cover blurb), who lives with his wife, his son and his mother in Gloucestershire.  Eventually he meets Rattery, and not too long afterwards has ingratiated his way into the Rattery home as Felix Lane, where he has devised (and detailed) the perfect method of exacting his revenge, with the added bonus of making George's death look like an accident.   One would think that knowing what's going to happen would not leave much room for surprise, but the author  is not quite finished with his reader yet.  After a shift in viewpoint that begins part two, it seems that not only is Cairnes' murder attempt thwarted, but later, someone back at the Rattery home has taken it upon himself or herself to finish the job, albeit in a different way.   A phone call brings in private detective Nigel Strangeways, who agrees to help Cairnes, as he has now become the prime suspect in the eyes of the police even though he swears he is innocent.

Not one more word of plot shall pass my lips (okay, in this case my fingertips) but I will say that my first venture into the mind of Nicholas Blake has been a successful one.   Not only is it worthy of my picky inner armchair-detective self,  but it also offers an insightful character study as well as the ingenious use of literary references that clicked into place in my head only after finishing the book.  Definitely not your typical 1930s, golden-age mystery, and it's one I can most certainly recommend.  I loved Georgia Strangeways; I'll now have to backtrack and go back to book number one to find out more about Nigel.

My advice: do NOT read reviews of this book that want to take you to the big reveal. You'll kick yourself if you do, trust me.