The Conjure-Man Dies: A Mystery Tale of Dark Harlem, by Rudolph Fisher 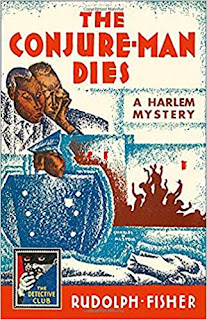 9780008216450
Harper Collins, 2017
originally published 1932
293 pp
hardcover
It is really sad that the author of this book, Rudolph Fisher,  died at such a young age, because after reading The Conjure-Man Dies, my thinking is that had he gone on to write more, I would have probably enjoyed reading everything this man would have produced.   An African-American writer of the Harlem Renaissance,  Fisher died at the young age of 37;  according to Sean Carlson in his recent article about the author for Motif, on his death Zora Neale Hurston sent a telegram to Fisher's wife saying that "The world has lost a genius." Langston Hughes would later write that "... Fisher was too brilliant and too talented to stay long on this earth."  Written in 1932 and set completely in Harlem,  the book is the first crime novel to feature an all-Black cast of characters.
The "conjure-man" is one N'Gana Frimbo, "A native African, a Harvard graduate, a student of philosophy -- and a sorcerer."   He works as a fortune teller/psychic out of an apartment in a house owned by the local undertaker in a room, "almost entirely in darkness," except for the illumination from  "an odd spotlight."  One night Jinx Jenkins and his friend Bubber Brown had gone to visit Frimbo, to get some advice about a business venture -- Jinx went in while Brown waited outside in the waiting room.  It wasn't long until Jinx came running out, grabbed Bubber and took him back to Frimbo's  consulting  room, where they found Frimbo dead. According to Jinx, he'd just   "stopped talkin', " after which Jinx turned the spotlight on the foturne teller and "there he was." It was "an hour before midnight" when the two ran across the street to Doctor John Archer for help, and on returning with them to Frimbo's apartment, Archer pronounces the conjure-man dead.  It is a true mystery; the wound on his head wouldn't have killed him, but on further examination, it turns out that the handkerchief stuffed down Frimbo's throat was more likely the cause of death.   The police are notified, and  Detective Perry Dart grabs the case.
Dart is one of ten African-American Harlem cops who had been promoted from patrolmen to detective, and "knew Harlem from lowest dive to loftiest temple." The case should have been simple, since there  were only a limited number of suspects, all of whom had been who had either been to see Frimbo or were waiting to see him that night, yet it was anything but.  In the long run it will be four detectives who contribute to its solution, as  Dart and Archer enlist the help of Bubber and Jinx,  who had been  hoping to start a private detective business of their own, to help round up the people who had dealings with Frimbo that night.  All I will say is that all of them are in for a number of surprises before the case of the dead conjure-man is solved.
I've read a lot of reader reviews in which most people figured out  the "who" pretty quickly, but I did not and it was a case of constant guessing right up until the end.  While that made me rather happy, what I found much more interesting was roaming the Harlem streets as Bubber and Jinx go out to round up the suspects.  When these people are interviewed,  their stories work outside of the mystery to provide a look at Harlem of the time, which is actually the reason I wanted to read this book.   As Scott Adlerburg from the LA Review of Books says in his revealing, in-depth article about The Conjure-Man Dies, Fisher adapts the mystery story "to his own concerns as a Harlem Renaissance novelist."
In his 1971 introduction to this edition, Stanley Ellin states that in writing The Conjure-Man Dies, Rudolph Fisher "invests" his story with the "qualities of a social document recording a time and place without seeming to,"  and that's precisely what he's done.  Adlerburg notes that Fisher  "paved the way for the Harlem novels of Chester Himes," and that he "wrote something that has lasted" by offering the people of Harlem "as he actually saw them."
It is a bit strange in the telling; on the other hand it is great fun and I laughed out loud more than once,  thoroughly enjoying every bit of this book for the crime and much, much more.   It won't be for everyone, but for readers who want a bit more in their mysteries or for readers who (like me) are more than interested in the literature of the Harlem Renaissance, it's a great match.
Posted by NancyO at 10:13 AM