The German Client, by Bruno Morchio 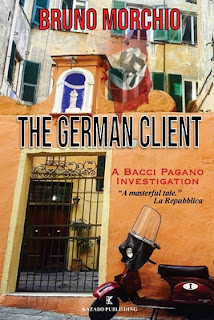 9781948104180
Kazabo Publishing, 2020
originally published 2008 as Rossoamaro
kindle edition
A few days ago I received an email from Kazabo reminding me that in March of 2020 I had said that I would be very interested in reading and posting about this novel.  I was actually horrified that I had completely spaced on doing that, so I bought a kindle copy right away (even though the lovely people at Kazabo had sent me an ecopy -- the least I could do, really), and then  yesterday I dropped everything to spend the day reading.   All I can say is that in March of 2020, on top of everything else going on, coronavirus became a new and intense stressor in our home;  quite honestly, I'm not surprised that I dropped the ball.  So to Chiara, my humble and sincere apologies.
Bruno Morchio (short bio here)  is the author of a number of books featuring private detective Bacci Pagano; while his work is well known in Italy, The German Client is the first of his novels to be translated into English.  The story begins in Genoa's Sestri Ponente  in January of 1944,  as a young girl makes her way to her boyfriend and "his comrades" who are waiting for her on Mount Gazzo, all partisans in a patriotic action group (PAG).   The Sestri Ponente had been the "center of industry" with "more workers than anywhere else," making it "the heart of Genoese Resistance."    Unfortunately for Tilde, she is out after curfew and is arrested.  She is suspected of being part of a "partisan relay" and spends the night in jail before she is released the next day. Fast forward to the present day.  Bacci Pagano waits outside of a guarded hospital room where a woman, Jasmine,  is fighting for her life. As the book blurb states, if she survives,"her testimony will shatter a notorious human trafficking ring."   As he sits outside of her door, he is approached by a certain Kurt Hessen from Köln who has a job for him.  It seems that he would like help in finding his brother, about whom he knows virtually  nothing except that "he is the son of an an Italian woman named Nicla" who may have been active in the Resistance and that he might live in Sestri Ponente. He knows no first name, no last name, and he has never seen a photo of the guy; what he does know is that he too is Nicla's son, and that his father had been stationed in Genoa as an officer of the Wehrmacht before being killed by a bomb at a local movie theater in May of 1944.  Hessen is dying, and he would like to find his brother to leave him a substantial inheritance.    At first Bacci is reluctant to take on the case but changes his mind.   He knows that he will have to start with former members of the Resistance, which he does, but when he begins asking questions, he soon realizes that even though World War II has been over a very long time, there are some things that these old Resistance partisans would rather not discuss.   Bacci also discovers that by talking about the past,  he "seems to have uncovered a world that had been safely buried." The story moves back and forth between present and past until these buried secrets are eventually revealed.
The German Client is a fine historical crime drama as well as a reminder that while history is never forgotten, for those who were actually a part of it there are perhaps some things just too painful to speak of.  It's a fascinating book, especially when we're in the Sestri Ponente during 1944 along with the Resistance fighters.  The author sets up an ongoing tension there that highlights not only the dangers of being involved in these PAGs, but also the necessary secrecy and the questions of whom one can actually trust.  These pages were flipped like crazy because I was so involved; the present narrative is also done very well, always linked to the past, with one exception:  the story of how Jasmine came to be in the hospital, staged in the manner of a more contemporary-style thriller.  While I'm not a huge fan of that sort of thing, the mysteries of the past that connected to the mysteries of the present were more than enough to satisfy.
One more thing: at the end of the kindle edition of this book is a link to Kazabo's website, so of course, I went there.  I was happily surprised looking at their "Criminal Destinations" series, all of which will be coming to my home at some point over the next couple months.  It's high time more of these books are translated and made available to an English-speaking mystery-reading public, so good on you, Kazabo!
Posted by NancyO at 5:24 PM