Catching up in double time: The Shooting Party by Anton Chekhov and Mr. Digweed and Mr. Lumb, by Eden Philpotts

Since I was last here there's been more calamity here at casa mia,  but things are starting to look up and life is moving on in a more positive direction.  Unfortunately, the setbacks mean I'm behind in my crime/mystery reading so today it's a double feature: The Shooting Party, by Anton Chekhov from 1885 and a more obscure title from 1933, Eden Phillpotts' Mr. Digweed and Mr. Lumb. Both of these books offer an interesting puzzle worthy of armchair detecting, making for hours of reading pleasure; as posted at internationalcrimefiction.org,  what ties these two books together and what appealed to Borges and Bioy Casares in putting together their list of novels in the Séptimo Círculo collection are the "mysteries, puzzles, tales of logic and clues" that are  "hidden behind surfaces of respectability."  That is certainly the case here. 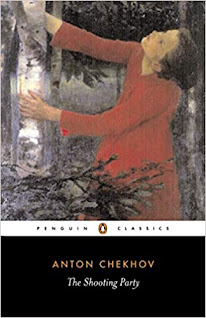 9780140448986
Penguin, 2004
originally published 1885
translated by Ronald Wilks
199 pp
paperback
As John Sutherland says in his introduction to this edition of The Shooting Party,  while readers are used to a "dash of internationalism" in the twenty-first century, excluding Dostoevsky's Crime and Punishment,  the Russian novel has not been a "strong presence" in the realm of  detective fiction.  Like many fine mystery stories of yesteryear, The Shooting Party started out as a feuilleton in serial form, and given the fame of Anton Chekhov and his later dramatic works, has remained "unjustly ignored."  A shame, really, because the mystery itself is quite good, and as Sutherland also notes, the book is "an accomplished crime novel in its own right."  I tend to agree with him when he says that "few who start reading the work will be tempted to lay it down," because that's precisely what happened with me.
April, 1880.  A man walks into a newspaper office, hoping for an appointment with "the Editor."  After identifying himself as Ivan Petrovich Kamyshev, former investigating magistrate, he asks the Editor to read his manuscript, and if possible, to publish it. The subject, Kamyshev says, is "love, murder," and he calls it From the Memoirs of an Investigating Magistrate,  swearing that the story "happened before his eyes," -- in fact he was both "eyewitness and even an active participant." The Editor isn't quick to bite, citing the readers who have "for far too long now... have had their teeth set on edge by Gaboriau and Shklyarevsky" and are

"sick and tired of all these mysterious murders, these detectives' artful ruses, the phenomenal quick-wittedness of investigating magistrates."

The particular story under consideration is called The Shooting Party, and eventually the Editor agrees to read it, telling Kamyshev to come back in three months' time during which  he'll make his decision.  What follows is the story-within-the-story, as the Editor offers Kamyshev's story for the reader's "perusal" after reading it,  assuring that it is "a page-turner."   That it is, and it begins as the local magistrate, here named Sergey Petrovich Zinovyev, goes to visit his old friend Count Alexei Karneyev at his country estate that has for some time been in a state of decline.  Karneyev's world is largely defined by debauchery, and Zinovyev is quickly sucked in to that space of drinking and partying, where an orgy is not an unusual event.   But the estate is also where Sergey Petrovich meets the beautiful Olenka, daughter of the forester Skvortsov, now living in a state of madness from perpetual drinking,  and is immediately drawn to this "girl in red."   The problem is that the same is true of  Urbenin, a widower with two children serving as Karneyev's estate manager, and the Count himself.  Olenka, who has "aristocratic pretensions," surprises everyone with the news that she has agreed to marry Urbenin, setting off a chain of events that will end in murder one fine day during a shooting party on the estate. Motives are plenty, as are suspects, but the question of the actual murderer has to wait until the very end.

That is all I will reveal about plot; anyone who prefers the element of surprise and reads anything about this book that takes plot and the possible identity of the who any further will end up kicking himself or herself in the long run.  And while it may not be one of the best crime novels I've read, it is certainly very much worth the read -- this may have been one of Chekhov's earliest works, but he is a master of characterization here which is much more important than the crime or its solution.   He wrote this in the 1880s, while Russia was still under Czarist rule, but he seems to have keen, almost uncanny insight into the future of class and social structure (including the roles and expectations of women)  in an empire that in just a short while will be completely transformed.   Definitely recommended. 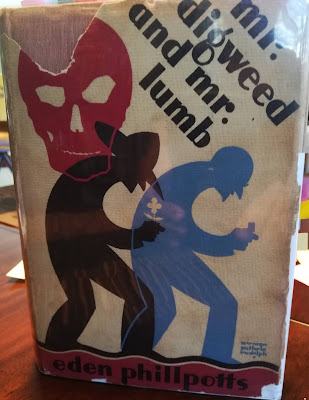 My copy of  Mr. Digweed and Mr. Lumb, complete with chipped corner on the dustjacket where it looks like someone took a bite out of the skull, is the first American edition, published by Macmillan in 1934.  The first British edition was published by Hutchinson in 1933, but I can't seem to find a cover image anywhere.
Two men of completely opposite temperament and circumstances live in separate houses on Heathfield Chine, west of Wellbrook-on-Sea in Hampshire.  Mr. Benjamin Digweed of The Anchorage, a "man of very modest means" with a love of gardening, tends to keep to himself enjoying the company of others only occasionally with his neighbor Mr. Martin Lumb of The Haven, and Lumb's factotum Higgs.  Mr. Lumb, who travels to London now and again, has no money worries, is an avid collector of  and an expert on Aviation Issue stamps.  The two dwelt in "perfect amity" so when Mr. Digweed disappears, Mr. Lumb is shaken and calls in the local police.  Two days had gone by with absolutely no word, and the clincher comes when the housekeeper arrives and finds the door of the Anchorage locked, leaves, returns the next day and there's still no one home.  The policeman (and narrator of this story) is Sergeant William Cartright, who catches the case since his superior is away temporarily; on hearing Lumb's story Cartright makes his way to The Anchorage where he finds a note indicating that a desperate Digweed has fallen on hard times, with no money left to live on and no means of supporting himself, and has thus decided to end it all.   The police accept the obvious, but a bit later Mr. Lumb "smelled a mystery" when he discovered that every bit of Mr. Digweed's clothing remained in his house and when the boat he was going to use in his suicide was discovered in an unexpected place.  While the police begin to look into Mr. Lumb's worries there's another death, but this time it's Cartright's bride-to-be and her father who take charge.
Again, not the greatest example of a 1930s mystery ever, but there's just something about Phillpotts' ability to put together a good yarn and to provide a challenge that appeals.  Eden Phillpotts may not be a household name in the realm of mystery reading, but I've now read two of his books (this one and The Red Redmaynes) that were both engaging and fun, definitely requiring concentration because the solutions don't lend themselves easily.  I will say that at some point while reading this one, I wrote a note with my theory and stuck it on a certain page where the light bulb started to blink on over my head, only to discover later that I was partly right but mostly wrong.  While there is definitely police presence in this novel, it is not what I'd consider an early procedural, since the crime is actually solved by someone else using intuition and logic;  while they do work on the case, the policemen become somewhat of a captive audience as the solution is revealed to them.    Recommended.
Posted by NancyO at 1:32 PM