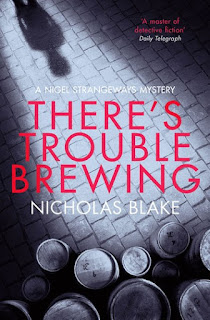 9781912194025
Ipso books, 2017
originally published 1937
paperback
The back-cover blurb is short but succinct, and reveals that a local brewery owner loses his dog in one of the brewery's vats.  It will also go on to reveal that said brewery owner will later be found in the same vat (more on that later).   I'm not kidding when I say that my mind immediately flashed to particular episodes of Midsomer Murders, Inspector Morse, New Tricks and even Brokenwood in a variation on the theme (a fermentation vat for wine instead of beer).  I'm sure there are more that I've missed, but it seems that death in a vat is quite a popular way to go.  Of course, all of the above came long after There's Trouble Brewing,  which made its appearance in 1937.   This is the second novel I've read by Nicholas Blake after The Beast Must Die, both read out of series order.  There's Trouble Brewing is number three  in the series featuring Blake's Nigel Strangeways, and I'll confess to enjoying his The Beast Must Die, number four, much much more than this one.
When Strangeways accepts an invitation to speak to a local literary society in Maiden Astbury (Dorset),  he has no idea that his stay there will last a bit longer than he'd intended. During dinner with his hosts, Herbert and Sophie Cammison,  which includes a bottle of beer from Bunnett's Brewery,  the conversation turns to the brewery's owner, Eustace Bunnett, or at least to his dog Truffles, who had been found dead in one of the vats at Bunnett's Brewery.  Later, after Nigel gives his talk on Caroline Poets,  Bennett approaches him and tells him that he is positive that Truffles had been murdered and that he is "exceedingly anxious to find out who did it."   He then makes a request than Nigel finds "bizarre," asking him to find out who sent Truffles to his untimely death.  Nigel doesn't want to do it, but having been warned earlier not to "sauce" Eustace Bennett and after one of the members of the society urges him to do it, as "none of us will get a moment's peace" until the matter is "cleared up,"  he agrees.
At the brewery next day to begin his investigation,  he is shown around while waiting for Bennett, but everything comes to a halt when a body is discovered in a "pressure copper."  Well, not quite a body, but a "half-disjointed skeleton" wearing the "soaked and tattered remnants of a dinner-jacket and boiled shirt."  When certain other articles are discovered, rumor starts that the remains belong to "the guv'nor" himself.  While the police are brought in, Nigel stays on to help and soon discovers that there are any number of people who wouldn't have minded seeing Eustace Bennett dead for many reasons.  He was, apparently,  the most odious person in the small community, and it seems that nobody is sad that he's gone.   As Nigel himself says, "Eustace was a crook, a menace, and a stunger."
I very much enjoyed the writing here, and only after two books now I have become a fan of  Nigel Strangeways.  I like his wife Georgia who sadly makes only a brief appearance here -- they are perfect for each other.  And who doesn't love a story  in which  a character is so particularly  loathsome that no one's going to be shedding a tear when he or she is dead?   With the number of possible suspects and possible motivations that Strangeways uncovers here, it should have been a great read.   The thing is though that Blake gives away the show much too early here with a particular remark that I took notice of  that colored my thinking,  so that by the time Strangeways cottons on to the solution, I'd already been there and was just waiting for our erstwhile detective to catch up.  At  chapter thirteen where Strangeways is going over the timetable of the case and makes an important discovery, I was just about ready to skip  and get to the ending I knew was coming.  It's a shame when that happens, really, because this could have been a most intriguing mystery novel otherwise.
Posted by NancyO at 11:14 AM