Act of Darkness, by Francis King 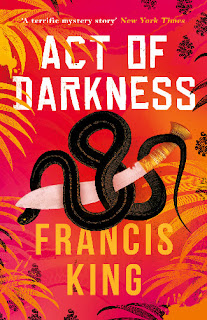 9781948405997
Valancourt Books, 2021
originally published 1983
305 pp
hardcover
I'm actually on the fence about labeling this book as crime fiction, because really, there's so much more to it.  I mean,  there is a crime (quite a heinous one in fact), there is a bit of an investigation and a number of possible suspects who might have been responsible.  At the same time, it ventures well into the literary zone, as the author delves into and  unravels human souls, exposing people for who they really are, and it works on a metaphorical level as well.   The bottom line, however, is that it's quite good, very dark, highly atmospheric and well, anything but typical.
Just very briefly and excruciatingly barebones so as not to spoil things for anyone who may want to read this novel, Act of Darkness is structured in five parts, and it is in the first of these, the appropriately-entitled "Omens,"  that we meet the Thompson family.   Set in India in the 1930s, they are at home  in the hill-station villa where they've gone to escape the hot summer weather of the plains.   Toby Thompson is the head of this family, although business and other matters interest him far more than his home life.  He is married to second wife Isabel, now pregnant, and they have a young six-year old son named Peter who can often be annoying and definitely curious.  Toby's daughter from his first marriage, Helen, a sort of cold young woman who feels out of place and somewhat resentful,  has recently returned from boarding school in England, and  also living in the home is Clare, Peter's governess, who likes things simple, unmessy and uncomplicated. These characters are introduced from his or her own perspective; by doing it this way King allows the reader to glean an understanding of the complexities and the tensions within their interactions with each other, and most importantly, careful readers will be able to pick out the "omens" of what's to come.
The central "Act" of this novel is a horrific murder that happens in the middle of one night, but it's the aftereffects that are at the heart of this story.  As the author writes,

"A slow, expected death has a way of irresistibly sucking the members of a family together down its dark funnel. This death, as violent and unexpected as the explosion following the detonation of a bomb, had the opposite effect of blowing the members of the Thompson family in separate directions, however much they struggled to cling to each other."

The murder also lays bare some of  the pent-up frustrations, jealousies and suspicions that have been simmering and chipped away at under the surface within this household.  The author absolutely excels here as he traces the effects of this crime on those left behind over the years that follow,  offering more than one or two surprising twists as he comes down to its solution.

I loved this book -- King has created an atmosphere seething with dark, sometimes violent  undercurrents running below the surface both within this family and also in India under British rule; that tension, once picked up on in the reading, just doesn't go away.  I will say that not too far after the murder, I had this sense that I already knew this story, and rifling through my brain it hit me where I'd previously experienced it.  I won't give away any hints as to what it reminded me of  (just in case), except that it was a particular and sensational crime that had occurred in England during the Victorian era.   Once it dawned on me, I was a bit upset,  thinking "well, I already know how this turns out," but as it happens, I wasn't at all prepared once the truth was revealed.  I can certainly and highly recommend this book, especially to readers who are more into the why behind  things rather than just the who.  It is a memorable story that I still see flashes of in my head  even though I finished reading it a few days ago; it's also a book that I absolutely could not put down.
Posted by NancyO at 4:52 PM