My Annihilation, by Fuminori Nakamura 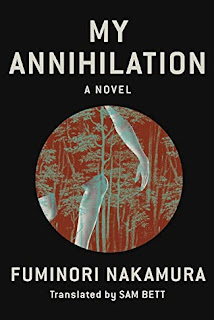 9781641292726
Soho Crime, 2021
originally published as Watashi no Shometsu, 2016
translated by Sam Bett
257 pp
hardcover
My Annihilation is yet another book I'm reluctant to label as simply crime fiction -- there are layers upon layers to unfold during the reading, and as the author himself notes in an afterword, in this novel he is exploring

as well as the question "what is a self?"
It doesn't take too long to become completely immersed in this novel, which begins in "a cramped room in a rundown mountain lodge," where our narrator is considering the "various forms of identification" in his bag, all belonging to someone named Ryodai Kozuka.   In a corner of the room is a white suitcase which he did not bring there, and on the desk is a manuscript, which he believes just might be Kozuka's life story.  As he begins to read, he finds a warning:

"Turn this page, and you may give up your entire life,"

but the narrator reveals that he has "no intention" of giving up his "old life;" all he wants is Kozuka's identity.   Noting that while Kozuka may have left some "unfinished business" behind, he assures himself that "it was no business of mine."    It's at this point (and we're only on page four) that I realized that it may have been a smart thing to heed that warning, but on into the manuscript he goes.

What he discovers within is unsettling, at best.  It begins with Kozuka's narrative about his childhood experiences, about which after only one-third of the way through, the narrator observes a similarity to his own story.  Reading on, he comes to a passage where Kozuka, looking back, notes that

"... It doesn't even feel like this is me. It's all so blurry, like something shrouded in a distant fog.  But evidently somebody is going to take my place. Someone willing to take over for me, accepting all the horrors ... I'm going to be saved."

This bit obviously disturbs the narrator, but only momentarily;  continuing on he comes to the story of  real-life serial killer  Tsutomu Miyazaki,  "one of the most infamous criminals in Japan."  And while the narrator asks himself "What was all that about?"  we know that there are certain things that link both Miyazaki and the author of the manuscript, which I won't mention to avoid spoilers.  Yet for our narrator, nothing seems more important at the time than opening that white suitcase, until he is interrupted by the ringing of a bell to his room.  That's when things, if not weird enough already, start to take the reader far, far down the rabbit hole.

Without spoiling things for potential readers, what actually emerges here is a sinister plot for revenge,  and I must say it's one of the creepiest I've encountered, with the actual mystery behind it all taking a number of  surprising twists and turns before all is revealed.   Underlying this novel is the answer to the question of "what is a self,"  to which the author responds that  "Under a particular set of circumstances, it becomes impossible to tell."  Using various forms of textual material throughout the novel, the author runs with this idea, revealing just how easy it is "to get inside a person's head," an idea at the very heart of this story.  He raises questions of identity and memory, especially the ways in which they might be changed or in this case, even created. With that then comes the question of what happens to the original self that must somewhere continue to exist; this sort of philosophical/psychological underpinning  is why I noted my reluctance at the outset to define My Annihilation as just another crime novel. At the same time, it moves this book well and deeply into the literary zone, and as the back-cover blurb notes, "into the darkest corners of human consciousness."   In short, it's right up my alley.

I love to try to solve mysteries as I read them, but My Annihilation is  one of those books where just when you think you have a handle on things, there's a shift and you realize you're completely off base.  As quickly as things change here, for me it became a matter of just giving up, going with the flow and letting things reveal themselves.   I'm not sure I'd recommend this one to all crime/mystery readers, but it's definitely for people who like their reading on the darker side.
Posted by NancyO at 1:53 PM