*and back to the movies we go with In a Lonely Place, by Dorothy B. Hughes 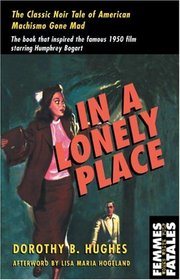 "Lost in a world of swirling fog and crashing wave, a world empty of all but these things and his grief and the keening of the fog horn at sea. Lost in a lonely place."  -- 171


First and foremost: anyone who's seen the movie and hasn't read the book and is planning to do so may not want to read the rest of this post, since  there's certainly no mystery in this novel about main character Dix Steele here, revealed very early on in this book.

Power, exhilaration, freedom -- three words from the mind of a man who stands on a cliff overlooking the ocean on a foggy evening, not exactly sure of why he's there that night.  His quiet reverie while enjoying his wartime memories,  the sea air, and the darkness is shattered, however,  when a bus stops to let out its passenger on the street behind him. As he turns to look, he sees a girl get off and starts to follow her,  "entirely without volition."  Luckily for her, she makes it home safe.

I say "luckily for her," because she could have become yet another victim of the strangler who is preying on women in Los Angeles.  The police are baffled, a point which becomes clear to Dixon Steele when he meets up with an old friend from the war who is now, to Dix's surprise, one of the detectives working on the case.  Afterwards, Dix realizes that there's something "amusing" about the situation, since it's Dix himself who is the killer.  His feeling stems from the fact that his friend, Detective Brub Nicolai, would be "able to lay hands on him whenever he wished;" something Dix views as


"Amusing and more exciting than anything that had happened in a long time. The hunter and hunted arm in arm. The hunt sweetened by danger."

Amused though he may be, Dix is not a happy man.  He sees himself as "The lone wolf," from which he takes "a savage delight"  even though he believes that "it wasn't happiness," but "the reverse of the coin."  He is also a person who "hated women," especially Brub Nicolai's wife, Sylvia. He feels that she is "conscious of him," but fighting it; she had been "burrowing beneath his surface since the night he had come out of the fog into her existence." While he resents it, he plans to enjoy "the game" of breaking down her withdrawal, especially since she's his best friend's wife. As we're told, it "stimulated" him, as did the idea of heightening the game by teaming up with Nicolai, waiting to hear the latest developments in the strangler case.

While we hear that


"His life was good, a slick apartment, a solid car; income without working for it, not half enough but he could get by. Freedom, plenty of freedom. Nobody telling him what to do, nobody snooping,"

Dix soon finds himself in a relationship with Laurel Gray, the gorgeous redhead who lives in his apartment complex. With Laurel around,  Dix feels like he was "meshed in a womb he called happiness."  But when she's not there, doubt begins to creep into his mind, and things start to take a turn that no one could have foreseen, with an incredibly powerful ending that I wasn't at all expecting.

What we have here is a story about a man in whom the cracks begin to show pretty much from the outset, and  I see from looking at what some readers think about this novel that they are a bit frustrated that there is very little in the way of an actual mystery.  I don't think that was the point, actually, since it seems obvious that Hughes is much more about character here. After having read two of her books now, I'm inclined to agree with Christine Smallwood in a 2012 article she wrote for The New Yorker, where she says that Hughes is not after "whodunit, but who-ness itself..." and that for Hughes, it's not the crime that is her interest, but rather "evil," making "that evil a sickness in the mind a landscape to be surveyed." That is precisely what happens in this book, so reading solely for plot just sort of misses the point. Then again, surveying the "landscape" of the mind is the biggest raison d'être of my reading life. And then there's the ending, unexpected to be sure, but just brilliant.  There's much more to find while reading carefully, and Hughes is definitely a master of her craft in this novel. 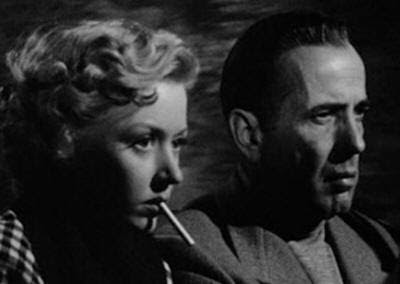 I sort of wish I hadn't read the novel before watching this movie (1950); within the first ten minutes I'm sitting on my sofa with my mouth hanging open thinking "wtf?"  I get that screenwriters always take some kind of liberties when moving from page to screen but I was expecting the movie to at least sort of mirror what happens in the novel.  If I consider the movie without trying to tie it to the book, it's a damn good film providing lots of tension, having its say about postwar Hollywood, and certainly keeping me on the edge of my seat until the end.  This is a movie where pretty much everyone involved asks the same question -- is Dix Steele actually capable of murder? This question becomes even more alarming for the new woman in his life, Laurel, who has in many ways become Dix's muse, prompting him to make a success of himself and work hard at writing a winning script which he hasn't had since before the war. Even as they grow closer together,  she  can't help but tap into the  undercurrent of suspicion that Dix may have killed a girl, even though she was the one to provide him with an alibi of sorts.  Everyone  knows he has a history of violent confrontations; Laurel sees him at his worst when he beats up a guy whose car he slams into one night. Heck, even I wasn't sure, wondering right up to the very last minute whether or not Dix Steele was actually a cold-blooded killer. And in my opinion,  it's this ambiguity that drives the film as the possibility of his guilt continues to mount, as the cops and others put pressure on him, and as the seeds of doubt start to take hold in Laurel's mind.

While there are a number of major differences from page to screen, in the novel, the major difference is that there is no ambiguity whatsoever; we know Dix is a killer almost from the very beginning. One of the best parts of the novel is the game that Dix plays with Detective Nicolai Brub, even going along to a crime scene with the cops, feeling superior and laughing smugly to himself inside.  He also eventually makes future plans, revealing to readers that he has no intention of being caught, and he's extremely clever in beating the cops at their own game.    Book Dix pretends that he's writing a detective novel, he lives in another man's apartment, and depends on an uncle for an allowance.  When he falls for Laurel, he goes crazy with thoughts of her with other men whenever she's not around.   Book Laurel, who eventually becomes doubt riddled for her own reasons,  is much more of hard-edged woman than movie Laurel, and the character of Sylvia is much more present and has much more of an active, crucial role in the novel than her on-screen counterpart.

So here's how I see things:  book and movie are really two different entities, so I can understand how, if someone sees the film first and then reads the book, disappointment might set in.  The same is true vice versa -- I read the novel first and expected something much different than I got from the movie.  I ended being crazy about both of them, but for me it's definitely the book that has the edge.  Bottom line: you won't be sorry either way -- both book and movie are excellent.