The Riddle of Monte Verita, by Jean-Paul Török 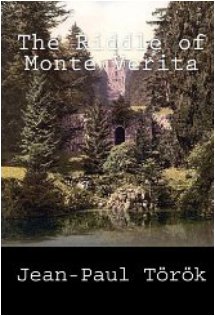 The Riddle of Monte Verita  is an obvious homage to the work of John Dickson Carr, who was a master of the craft of the locked-room mystery; it's also a product of the author's desire to


"write an impossible crime novel that obeys the rules of what is often called Golden Age fiction; to write it in a manner faithful to the French language usage of the time; and to end the story with the last sentence of La Chambre ardente, the French translation of Carr's The Burning Court..."

An admirable project, yes indeedy, but well, for reasons stated in the author's note section at the end of the book, things didn't come quite off as planned, but I admire the author's passion.  As it so happens, I'm a huge fan of locked-room mysteries; for me, first and foremost  it's all about the shock of the actual "impossible" crime that makes me wonder "how could that have possibly happened?," followed by scouring for real clues while trying to sort through the red herrings that find their way into the investigation. My experience has been that sometimes the solutions to these crimes have been pretty ingenious, while sometimes they're a bit on the silly side, which is a bit disappointing.  Here I enjoyed the central mystery;  there were enough red herrings to keep me highly satisfied, and enough places where I said to myself "this might be important" that I marked with page tabs. In the long run, though, while I enjoyed it for a while, I ended up feeling a bit let down. More on that soon.

Ascona, Switzerland, 1938.  Sorbonne professor Pierre Garnier has just arrived to attend a symposium on detective fiction that is being held at the Albergo Monte Verita. Accompanied by his wife Solange, he makes the acquaintance of another participant, Professor Lippi, on the way to the conference's inaugural cocktail hour.  Lippi gives him a rundown on the original "riddle" of Monte Verita, involving a turn-of-the-century colony of "gentle cranks" whose leader had "stuffed his head with esoteric theories" and went by the name of Rosenkreutz.  Not only did he call himself by that name, but insisted that he was the reincarnation of Christian Rosenkreutz, the imagined founder of the order of Rosicrucians.  It seems that the first Rosenkreutz is said to have entombed himself in a grotto, so his namesake at Monte Verita decided to seal himself in a "natural cave"-slash-grotto very close to the Albergo hotel to meditate and pray.   The legend is that his "flock" saw him go in, sealed him in with boulders, then stood guard for three days. On the fourth day, they opened the cave and their fearless leader had disappeared, never to be seen again.

Don't worry -- even though it sounds as if I'm leading you toward some sort of esoteric, Dan Brownish type novel -- the history of Monte Verita is definitely relevant to this tale.

Lippi's theory, as he presents in his symposium session, is that people who view the locked-room mystery as improbable are wrong, and that "it's not important that these kinds of situations cannot occur in real life." He is challenged by a certain Doctor Hoenig,  prompting remarks by Lippi that make the audience laugh and turn Hoenig purple with anger.  Then Lippi adds that no one would commit murder in real life in the manner of locked-room mysteries, since taking the time to set up such a crime is a "horribly complicated way to kill someone," drawing further ire from Hoenig who swears that he has evidence from "impossible crimes" he's investigated personally that he will present during his own lecture. But since Hoenig's "ingenuity of ... interpretation" won't enough to satisfy Lippi, he challenges Hoenig to "submit to a conclusive experiment" by shutting himself into the grotto and making himself disappear.  Well, these days the grotto is barred so no one can get in, but strange things begin happening that lead to murder and ultimately leave Garnier wondering just who he can trust.

Great premise, actually, and for a while there the story was on the plus side of atmospheric, pages were flipping at a fast rate, and my interest remained high for some time.  But what kind of soured me here was that when we get to the (for lack of a better word) alternative solutions, they've been done before, something I spotted well before the "spoiler" page where the author spells it all out.   It's one thing to write a book like this to pay tribute to an author, and indeed to an entire subset of mystery fiction, but to use scenarios that any major fan and serious reader of locked-room/impossible crime would recognize right away is not what I'd call original.   I won't discuss them here in case someone wants to read this book, but you've been warned.

I'd say don't shy away from it -- it was fun for a while -- but if you're looking for something new and original as far as a locked-room/impossible crime mystery story, well, this just might not be that book.