Under the Midnight Sun, by Keigo Higashino 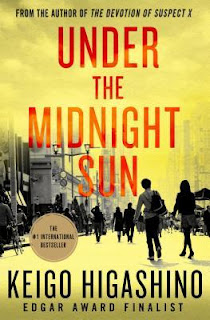 arc, my thanks to the publisher!

Under the Midnight Sun hasn't even been officially released yet (that's tomorrow, actually),  but it seems to be taking the crime-reading world by storm. A brief perusal of the usual places shows that readers are all over it, with reviews on a 5-star scale coming in just about at the 4.5 level.  I have a feeling it's going to be selling like hotcakes.

If there's anyone out there who doesn't know Keigo Higashino, he's the author of the popular Detective Galileo series that so far has three entries:  The Devotion of Suspect X, Salvation of a Saint, and A Midsummer's Equation.  (I've read and enjoyed the first two, and surprise of all surprises, my husband actually liked the first two books as well. I say surprise because we don't usually agree on crime novels.)  He's also the author of another series of nine novels featuring Tokyo detective Kyochiro Kaga, of which only Malice has been translated, and three standalones: Naoko, Under the Midnight Sun and coming soon, The Name of the Game is Kidnapping.  He's obviously a man devoted to his craft, and has been a finalist for two different crime-writing awards here in the US.

Under the Midnight Sun I'd label as "epic psychological crime drama", since it takes us through nearly two decades of time before we're through here.  It begins in 1973 with the murder of a pawnbroker by the name of Yosuke Kirihara, who was found dead in an abandoned building, leaving behind a wife and young son Ryo.  Osaka detective Sasagaki is on the case and as he's beginning to get somewhere with the investigation, there are two more deaths: first, that of a wholesaler named Terasaki who is connected somehow to  Kirihara's death or at least knows something more than he's saying,  and second, somewhat later, the suicide of a woman whom the detective has been considering as his prime suspect in Kirihara's murder. She also leaves behind a child, Yukiho, who is later adopted by a relative.  Sasagaki fails to make any traction on the pawnbroker murder, a fact which, as we later discover,  has haunted him over the years.  However, after these three deaths, we say goodbye to our erstwhile detective for about nineteen years as the author moves the story forward around the lives of  Ryo and Yukiho.

I think that's about all I'm going to give away as far as plot, because a)  a story that unfolds over nearly twenty years really can't be summarized very neatly, b) it's much more character driven rather than plot driven, and c) there are a number of twists and turns as the years roll by before our detective makes his way back into the picture.  And while a lot of nefarious things happen throughout this story that left twists in my gut, the main emphasis turns out not to be the actual 1973 case itself, but rather on the two kids left behind, with betrayal and obsession as two main themes that run throughout the book.

The deaths at the beginning pave the way for what follows, and most of what happens over the next two decades is enough to keep anyone reading.  The situation is never pretty and there's no happy happy anywhere in this book, but that's all in keeping with the author's psychological focus here. Along that particular trajectory, the author is quite successful as he reveals the very warped and darker side of human nature.  At the same time, my personal preference is for more streamlined crime fiction, and this book piles subplot upon subplot upon subplot, goes into a lot more dialogue than I felt was necessary, and while I get where the author's going with all of this characterwise, in my opinion, it could have been a much tighter and stronger story had a lot been left out. One more thing: whoever wrote the back cover blurb (it's probably on the dustjacket of the finished copy) really does readers a major disservice by referring to the "obsessed detective" since really, he's there at the beginning and doesn't actually reappear for the next nineteen years. If he's that obsessed, he should have been worth at least a mention here and there but basically he's forgotten until close to the ending.  Still, the strength of this novel is much more in its psychological underpinnings, and that's actually done quite well.