A Climate of Fear, by Fred Vargas 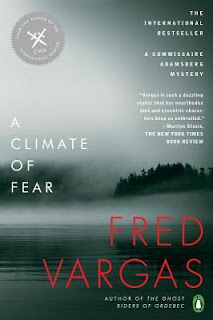 I'm actually in between crime reads at the moment, having finished two Victorian crime novels (posts coming shortly), one of which has a prequel that was written five years later.   Waiting for said prequel to arrive in the mail, I rummaged through my shelves for a light, modern read and stopped at this book by Fred Vargas, which is the ninth book to feature Commissaire Adamsberg and his motley crew of colleagues. While I've sort of lost my zeal for keeping up with crime/mystery series novels, there are still a few authors whose work I can't not read, and Vargas is one of those.  I haven't missed a single one of these books; while sometimes I was less than enchanted (to put it mildly) with the turn toward the supernatural in some of her novels,  I can't help myself -- it's the ensemble cast that is the real draw for me in these novels.

It is the investigation of a suicide that starts this ball rolling; oddly enough, it doesn't take place in Adamsberg's patch, but rather that of Commissaire Bourlin in the 15th arrondissement.  The police are ready to close the case, but Bourlin is still concerned about the dead woman's last message, a strange sign drawn by the side of  Alice Gauthier's bathtub.  He knows just the person to call to help him on the matter, Commandant Adrien Danglard of the Serious Crime Squad in the 13th arrondissement. Danglard is one of those people whose knowledge is astounding, so his choice isn't a bad one. Yet, as one of his colleagues reminds him, behind Danglard is Commisssaire Adamsberg, and sure enough it isn't too long before Adamsberg's curiosity gets the better of him.  What starts out as a potential suicide explodes into a full-blown murder investigation when other bodies are discovered along with the same cryptic sign at the crime scene.  And when a witness steps forward to reveal that she had posted a letter that had fallen out of the handbag of the now-dead Alice Gauthier, things take a strange turn, taking Adamsberg and his crew back in time to an ill-begotten and deadly expedition to a small island off the Icelandic coast.

At the risk of sounding like a late-night tv infomercial,


Hoping for some clue as to how the now three dead people may be connected, their photos are sent out to the world via social media and the press along with with a plea for information. While still following the Iceland lead, Adamsberg and his colleagues receive a letter from a certain François Chateau, who informs them that he recognizes all three as being members of an association of which he is president.  While one of Adamsberg's men calls it "a tank full of nutty fans of Robespierre and the French Revolution," the organization is actually called The Association for the Study of the Writings of Maximilien Robespierre. Chateau is concerned that a murderer may be "at large" in his association, and as much as possible, wants to help in any way he can.  As the squad becomes more involved in this new development, Adamsberg develops a certain "itch," which leads to all kinds of complications involving his colleagues.

Yes, there is a certain bit o' the supernatural vibe in this book, but luckily it's kept to a minimum here.   While the investigation comes to a standstill, Adamsberg is facing a trial of his own as his colleagues start to become fed up with his sort of out-there methods. He's a man very much living in his head in this novel, and in order to satisfy his nagging "itch," he makes a decision that will set part of his own squad against him. In this sense, and in terms of where Adamsberg is led as he desperately tries to untangle all of the knots in the case to ease his own mind, the original French title is much more on the money.  I won't divulge anything, but the reasons why this is so become evident as the novel comes to a close.

Climate of Fear isn't the best book of the series but it does follow the others nicely, and as I said, it doesn't overdo what I call the "woo-woo" element which I didn't care for in some of  the previous Adamsberg novels.  There are plenty of red herrings, two bizarre plotlines, and of course, the characters in Adamsberg's ensemble (not to mention the woman with the pet boar named Marc), which when combined, make it another book that appeals to my need for offbeat and quirky tales. It's not great literature, nor is it likely to become a classic, but hey ... it IS summer and it's a good light read while trying to escape the sweltering summer heat.

Do not let A Climate of Fear be your introduction to this series of novels -- there are things here that will not be understood (and become the cause of reader complaints because some people did start with this book) unless you've started from the beginning with The Chalk Circle Man.  While I've given away tons of crime novels to make room for more, the Adamsberg series has stayed on the shelves.  Obviously, that says a lot --  there's a reason I keep reading them. 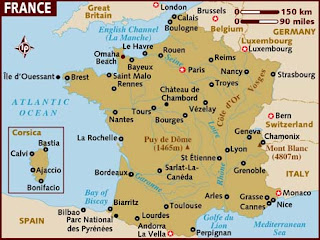