a Maigret triple play: The Carter of La Providence, The Late Monsieur Gallet, and The Hanged Man of Saint-Pholien, by Georges Simenon

Sometimes when I've finished a book and have all the relevant information in my head, I can't help but to feel sorry for the villain, and that's certainly the case in this second novel in Simenon's Maigret series. This one is set along France's Canal latéral à la Marne,

where two kilometers from Dizy stands Lock 14 and the nearby Café de la Marine, where "the rhythm of life ... was slow. " For a few days, life here is interrupted when something strange happens.   A body has been discovered by a carter on waking up and getting his horse ready for the day's work.  As he is moving his hand around under the straw to find his whip, next to where he'd been sleeping, he feels something "cold," and the dead woman is revealed in the light of his lantern. This discovery, we're told, is "about to bring chaos to Dizy and disrupt life on the canal."  And that it does, as Maigret takes the case, beginning with the mystery of how she got there since there was no road, and since anyone who walked there would have found him/herself knee deep in mud.  The woman's shoes are clean and there are no traces of mud on her dress; in fact she's dressed more for a night out on the town. One mystery is cleared up after yacht owner British Sir Walter Lampson identifies her as his wife, but knowing who she is doesn't answer all of Maigret's questions. It has the opposite effect, actually.

Once again, we find ourselves steeped in atmosphere from the beginning -- rain, gloom, mud and life on the river.  Set against Lampson's yacht, the canal is filled with barges, some motorized, while some, like La Providence depend on horses and their carter to get them through.  And while Maigret follows the details of the case, it will once again be his knowledge of human nature that will solve it.

The Carter of La Providence is a slow burner, with a number of potential suspects and motives, but as I said, once the case was solved, I couldn't help but feel sorry for the murderer, and I think it would take someone with a heart of stone to feel otherwise. 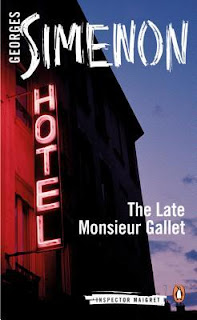 "Peace, for heaven's sake, that's what he was waiting for."

Moving on to book number three, The Late Monsieur Gallet is completely different from its two Maigret predecessors, but as in the case of The Carter of La Providence, Simenon managed once again to worm his way under my skin and right into my empathy zone. I am beginning to believe that this man must have been one of the keenest observers of human nature ever, something that becomes quite obvious here as the story unfolds, layer by layer by layer.

Left pretty much on his own on 27 June 1930, Maigret receives a telegram informing him that a commercial traveler by the name of Émile Gallet was murdered two days earlier at the Hotel de la Loire in Sancerre. His home address was also given, and it's there that Maigret has his first exposure to the dead man in a photo. That picture, along with another photograph of the dead man's son, will come to haunt him over the course of this case, which begins with his premonition that it  "had all the hallmarks of a particularly distasteful investigation."  And as things turn out, he was right. Aside from the photos that will replay in his mind, when Gallet's widow at her home in Saint-Fargeau is told that her husband was killed in Sancerre, she produces a postcard from Rouen dated the day after Gallet was dead, proving in her mind that Maigret is wrong. Accompanying him to Sancerre, Mme. Gallet is annoyed that she's likely off on a wild-goose chase, but changes her tune when indeed it turns out to be her husband.  Then, when Maigret talks to a local inspector, he discovers that whenever the dead man stayed at the Hotel de la Loire, he'd registered as a M. Clément from Orleans.  Thus begins the strangest investigation to date in this series, which will expose much more than a murderer.

When all is said and done, this book turns out to be a bit of a gut-wrenching sort of experience as Simenon basically lays bare some of the ugliness of which humans are capable;  it also, in my opinion, begins to bring out the very human (as opposed to strictly investigator) side of Maigret not yet seen in the two books prior to this one.  That trend continues to grow in the last of the books under scrutiny here, The Hanged Man of Saint-Pholien, 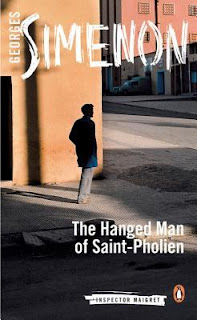 which has also been translated as The Crime of Inspector Maigret, which, incidentally, is the first chapter heading.  Following a "shabby traveller" from France to Bremen, Maigret and his quarry have arrived at the Gare de Neuschanz at the German border, along the northern edge of Holland.  There, the man sets down his cheap suitcase, leaving it alone for two minutes. During his absence, Maigret swaps it with an exact replica that he'd picked up earlier, and the two men board the train for Bremen. He tails the man as he buys two sausage rolls (small detail but it bugs Maigret throughout the story) and then makes his way into a "poorer neighborhood," where he takes a room in a "seedy-looking" hotel.  Maigret, of course, is in a connecting room, where he puts his eye to the keyhole and watches as the man opens his suitcase, realizes that the contents are missing and goes into panic mode; he also follows as the distraught man makes his way back to the station to check for his lost bag. At around midnight, the two return to the hotel where Maigret once again peers through the keyhole, only to see the poor man put a gun in his mouth and shoot himself.  As the local police arrive, Maigret informs them that it is suicide, that the man's French, and that he would like their permission to investigate privately while they do so officially.  Maigret returns to Paris, where he

And to top it all off, it was


"A man he didn't know! He knew nothing about him! There was no proof whatsoever that he was wanted by the law."

This is the point where the story begins, going back first to Brussels where it all began a day earlier,  then moving ahead as Maigret tries to find out exactly why  Louis Jeunet would take his own life. His investigation takes him into the past and into a dark secret that people will kill for rather than have it come to light.

The notions of guilt and justice are writ large throughout this novel, and  I can't help but feel that Maigret's involvement -- his need to see the case through to its end -- after Jeunet's suicide is his own way of trying to assuage the guilt he feels over his role in the man's death. However, that's just one facet of the role guilt plays in this novel.  As for justice, well, that becomes obvious along the way  and once again, as in M. Gallet, Maigret's understanding of human nature and his ability to move away from the job and into his conscience serves him well here as he has to make a decision that could change a number of lives.

It would be a grave mistake to read the Maigret novels as just another set of police procedurals or to think that Simenon is the male equivalent of Agatha Christie.  No.  These books move straight to the heart of human nature, and as I said earlier, Simenon is a master of observation.  I have seventy-one novels to go and by god I'm going to read them all.